Where the Butterflies Are: Singapore, Montpelier

I didn’t arrive in Montpelier straight from the psychiatry ward in Singapore, but my stay in the ward was close enough to the beginning of the residency that I thought my trip would be canceled. I predicted that I was going to be diagnosed with a psychological disorder and unable to join my classmates in a city that had been described as a catch-all paradise.

What had happened was this: a few weeks before our residency, my head had become woozy. It felt as though a cloud were behaving in intervals inside: blooming, then heavying, sinking, and flattening into my skull, pressing into my bones; then, a feeling of wings, light as butterfly wings, flapping up and down inside. At times, the sensations were less bucolic. Instead of butterfly wings, I sometimes experienced the pressure of compression, the suction of my bones. All this as I sat in my home and outside, feeling alone.

I went to see the neurologist, whose tests said that my brain was “structurally okay.” However, he could, he proposed with a shrug of the shoulders, refer me to the ENT if I was still curious, “but she is very busy.”

“About war?” he queried.

“No, not war,” I replied, annoyed. Wait, or maybe—“Isolation,” I quickly added. “I write about the unpleasant kind of being alone.”

Singapore is a lovely and lonely place. Manicured trees and sleek cars line the streets. Many drivers honk at one another without a clear cause, as if only letting their cars breathe. Paradoxically, the honking drivers drive as if they’re using the streets alone. The physical environment here is often refined, nudging me to overlook how spurned and isolated lives here can become.

The physical environment in Singapore is often refined, nudging me to overlook how spurned and isolated lives here can become.

I am grateful, mostly, for a predominantly comfortable lifestyle in Singapore, and yet, in this city-state, I hurt the way that most cities do its long-term residents harm. Boundaries surround me. Many of us here are physically separated by a labyrinth of walls, doors, and limited-access floors. Virtually, in this hypercyberized nation, our lives are more “connected,” but that connection barely feels enough.

Isolation, as a topic, has been looming on my mind. This interest began three years ago, when I was holding a one-year-old in my arms and nursing my new role as a stay-at-home mother.

I lived in limbo, waiting to see the ENT. Daily, I still felt the wings, the wooziness, and the squeeze—in fact, all were becoming stronger. I was increasingly anxious about what it meant to have a brain that is “structurally okay” and yet feel this way.

On a night where the sensations escalated, I became terrified. I’ve gone crazy, I told myself, I’m thinking things that aren’t real. I propelled myself to the hospital, telling my husband and three-year-old as calmly as I could, “I’m going to ask to be admitted. I want to have a doctor looking after me. No need to come. It’s midnight.”

The psychiatrist woke me up the following morning. We introduced ourselves. He asked how I was feeling, and I said, “Calm.”

“It’s probably the Xanax,” he explained.

He asked what my life was about, and I told him: motherhood and writing. I spoke to him of the excitements (the writing) and the woes (the motherhood, which was more rewarding now, but the damage from the beginning still felt solidly imprinted in my mind). We came to the question of my fitness for the residency. After a brief discussion, we agreed that I could go.

“Your panic attack last night could be only a one-off. Just take your Xanax with you,” he advised.

I have been moving since I was three years old, and I never had a problem forming communities wherever I went. However, Singapore’s more reserved culture, matched with an increasingly cyberized era and my status as a stay-at-home mother, gave me the most isolated days I had ever experienced, even if I tried to reach out.

At the ENT, two days after my discharge from the ward, I learned that I had an infection, one that was at the back of my nasal pathway—nothing I could have detected on my own, without a camera. “Was it the cause of all those sensations in my head?” I asked immediately when the doctor pulled the camera out.

She explained that it could have been the nasal infection “and/or” my worry over the “objective sensations” that created “even more sensations, maybe only subjective.”

I paid for medicines, recognizing that I was not getting clarity too. I distracted myself from wanting it by feeding my hand my phone. I checked into my flight.

The taxi I had booked arrived late at the Montpelier Amtrak station. Immediately I thought about how a reserved taxi would never be late in Singapore. Annoyed, I picked a fight with the driver. I wanted to tell him how he had left me afraid at a dark station, all alone, how I was being bitten by aggressive mosquitoes. Couldn’t you be more like a city cab? I wanted to say, but I had only enough courage for, “The lady on the phone said Iron Man would pick me up, but your plate says ‘Hulk.’ You’re sure I’m your passenger?”

“Yes, I am!” the driver said, not at all ticked. “We’re a fleet with names of Marvel characters,” he volunteered.

I couldn’t believe this conversation was real until I arrived at my destination. A faculty co-director was graciously waiting for me. Evan showed me my room. Then, one by one, the doors in the hallway opened.

The workshops with Madeleine Thien, Rawi Hage, Mark Polizzotti, and Jackey Collis Harvey enthralled our intellects, and Montpelier itself proved to be a city of bliss. It nurtured me back into an environment of neighborly humans.

Montpelier itself proved to be a city of bliss. It nurtured me back into an environment of neighborly humans.

At Bear Pond Books, the restrained clerk with a ponytail first pretended he was not listening, but when my classmate put down one out of two books after a long deliberation, the staff revealed, “I was quietly voting for The Wife, too.”

Later, we walked to the post office, where the employee there waited patiently as the same classmate tried to fit in his partner’s address on a postcard in a space so small that his words couldn’t be recognized.

“Do you think it’ll get sent?” my classmate asked.

“I, I think,” the clerk stumbled, “you can try.” My classmate asked the same question again; the staff replied similarly again, not showing any annoyance.

On the street, where I sat writing, a young girl and her family came up to me. “Excuse me,” the woman said. “We’re playing a family game. Can we ask you a question?”

“Sierra, go ahead. Ask the lady your question.”

“What a wonderful game,” I said. “I’d love to play this game with my daughter, too.” But where? I am going home in two days. Who would talk to a stranger there? The questions immediately came to mind. Don’t mind those thoughts for now. “Let’s take that selfie.” I smiled. She handed me the card, which I held as she took the photo. I tried to hand it back to her when we were done.

I checked the contents of my purse before I left. In a pouch: a Xanax strip, unused, and the girl’s card.

I checked the contents of my purse before I left. In a pouch: a Xanax strip, unused, and the girl’s card.

The taxi was late again. A monarch butterfly, outside my head, flew across the lawn. The taxi was already half an hour late. I noticed a part of me thinking the old words, Couldn’t you be more like a city cab?

I knew what I was going back to, where the butterflies could be: in isolation; in worry; in anxiety; or in a real medical situation—any of these places, or more, who knows. But here I was, in Montpelier, where the only butterfly I spotted was the one that had just left the lawn. 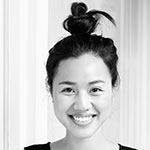 Thammika Songkaeo is a Thai writer living in Singapore. An MFA student in nonfiction at Vermont College of Fine Arts, she is working on her first book of essays, on family and isolation, as well as a novel on solitude. Thammika is a graduate of Bread Loaf in Sicily, Williams College, University of Pennsylvania, University of Texas at Austin, and the Japanese Language School at Middlebury College.