The Children of Greenwood

Stills from I Dream of Greenwood, with creative direction by Marie Casimir, produced by Michelle McChristian, and directed by Kollin Williford / Courtesy of Scissortail Media

The co-choreographer and co-lead dancer of the I Dream of Greenwood dance film—which premiered on April 9, 2021, and was followed by an audience talkback with Marie Casimir, J’aime Griffith, Leslie Kraus, and former U.S. Poet Laureate Tracy K. Smith—reflects on the creative process that shaped her contributions to the project.

Sitting in her Greenwood home, Oliva Hooker hears a series of loud noises that sound like a hailstorm. This didn’t make sense; the sun was shining that day. Her mother, who knew the reality, took her to the window and said, “That’s a machine gun up there. You see the American flag on it? That’s your country. It’s shooting at you.” In an archival video interview, the late Dr. Hooker, one of the last known survivors of the Tulsa Race Massacre, tells this story, recalling her experience of the massacre. Reflecting on the memory, she laughs and says, “It never occurred to me, my country ’tis of thee would shoot at me.”

My heart broke when I learned she was six years old during the massacre. I would imagine that even at six years old, she was somewhat aware of the racial tensions that existed in the city but likely had not experienced this level of violence. I wondered, How, at six years old, did she process that sight? Learning about the Tulsa Race Massacre and the hate-fueled actions in my late twenties has been extremely difficult to process. I couldn’t imagine what the children of Greenwood were feeling and the impact it had on their lives moving forward.

As the lead choreographer and source of the creative vision for I Dream of Greenwood, commissioned by World Literature Today and OU’s Clara Luper Department of African & African American Studies, Marie Casimir assigned Eddie Faye Gates’s Riot on Greenwood: The Total Destruction of Black Wall Street, 1921 along with various archival video interviews of survivors telling their stories. Meeting weekly, Professor Casimir, Professor Leslie Kraus (the dramaturge), and I began rehearsals with a check-in followed by a discussion about the excerpts from the book and the interviews. The stories provided the real and detailed experiences of survivors of the Tulsa Race Massacre. It was essential to us to deliver a thoughtful performance upholding integrity out of respect for the subject matter, Greenwood, the survivors of the massacre, and victims who lost their lives. To do this, we had to find a personal connection to their stories. We shared our personal experiences with racism and loss and the current events of racial tensions and unrest, helping us relate and make an emotional connection.

My family evacuated from New Orleans to a small town in East Texas during Hurricane Katrina, when I was twelve. As a young girl, I had only been in majority-Black spaces. Our new home was in a primarily white town where I was often one of two Black students in my classes. Riding the school bus home with our cousins, a white boy got on the bus and spotted us, the new faces. He said, “I see we got a couple of black heads on the bus today.” Everyone laughed. We had never been singled out and targeted specifically for being Black before moving to East Texas. This is one of the less extreme examples, but the list goes on. I tried to revisit how I felt in that moment and to find ways it shaped the way I viewed the world afterward. At that moment, I felt angry, embarrassed, confused, ashamed, and outcast.

Loss became a central theme. When I think of loss in my life, I also think of Hurricane Katrina.

Since living in East Texas, I find myself triggered when in all-white spaces, taking me back to the twelve-year-old living in a racist environment. I referenced these emotions when shooting sections of the dance film. Loss became a central theme. Greenwood’s people lost family members, property, and valuables in the massacre. When I think of loss in my life, I also think of Hurricane Katrina. My parents lost jobs. We lost valuables. But most importantly to me, because it made more sense for our family to stay in East Texas than move back to New Orleans at the time, we lost time with family.

The movement in our dance film, I Dream of Greenwood, was a product of improvisation. Following the discussion, we took a word, phrase, or emotion that felt important from our conversation and translated it into a movement prompt. In some rehearsals, we improvised together, but we also found it useful to watch each other. We took note about what felt good in our bodies. Our hands frantically touch the earth and search the area, we rise and violently grasp the air in the darkness. As the weeks progressed, we continued to explore old and newfound movements until we developed a shared vocabulary. The film is a collection of our embodied thoughts and emotions about one of the worst acts of anti-Black violence in US history. Each rehearsal, we revisited and reworked what existed. New phrases and choreography emerged. Our exploration continued to evolve until the last day of shooting. Similarly, our research and understanding of the topic continues past completion of the project. This choreographic approach was appropriate for the work because it allowed us to embody our reactions without a filter. Improvisation forced me to be sensitive to how emotions are felt and shown in my own body.

This choreographic approach was appropriate for the work because it allowed us to embody our reactions without a filter.

“When daylight came, black people were moving down the train tracks like ants. We joined the fleeing people. . . . Everyone was just running as hard as they could, trying to get to Golden Gate Park. . . . But we made it to that place. We lay down on the ground and rested. I remember lying flat on my back, on the bare ground, looking up at the stars, and sleeping fitfully through the pre-dawn morning.” Ernestine Gibbs’s story of fleeing inspired a section of the film we nicknamed “train tracks.” When creating, I imagined what the children saw and how it probably felt unreal, like a dream, then realizing it was real but there was no escape. I focused on movement improvisation for the word “stuck” as Marie watched. I ran in place, continuously, my body hitting an invisible obstacle. I felt the desperation and frustration of trying to escape but not being able to move forward or backward. Eldoris Rae McCondichie found herself stuck with images of a destroyed Greenwood and the violent killings replaying in her head. “As a child, I suffered with fears of nightmares after the riot. Some of those fears, bad feelings and sadness linger on to this day,” said McCondichie.

The choice to use a circular spatial pattern while performing repetitive movement was intentional to show how the images never left the survivors of the Tulsa Race Massacre. With one leg anchored, I travel around the clock. I pick up my leg and place it down at each hour mark. Time speeds up and I lose control of my arms. I gain control as I stretch a hand to the sky. We learn and feel and dance it out.

Editorial note: The full-length video of the April 9 I Dream of Greenwood premiere can be viewed on OU’s YouTube page, and Marie Casimir’s essay on the dance project appears in the spring 2021 “Redreaming Dreamland” issue of WLT dedicated to the centennial. For more on the university’s yearlong centennial commemoration events, visit the Remembering the Tulsa Race Massacre website. 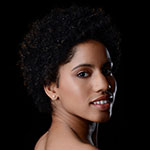 J’aime Griffith is currently a grad student at the University of Oklahoma studying modern dance in the OU School of Dance. She studied at Grambling State University and the Ailey School and began her professional career with Samba/Salsa Entertainment, Awaken Dance Theatre, and Atmosphere. For the OU School of Dance, she choreographed and designed/constructed costumes for Am I There Yet, Disposition (Young Choreographers Showcase, 2020, 2021), Our Spring Will Come, Headlines, Piping Tunes (Modernist Adventures in Music and Dance 2021), performed Ashes, Ashes, choreographed by Austin Hartel (Contemporary Dance Oklahoma, 2020), and taught modern dance level 1 and modern dance level 2. In her free time, she teaches modern dance at Freedom Dance Studio in Oklahoma City.