A longtime scholar, translator, and promoter of Ukrainian literature reflects on the existential crisis confronting Ukraine—and the West—today.

In Pavlo Tychyna’s famous cycle of poems Instead of Sonnets and Octaves, written during the violence of the civil war in 1918–1920, the Ukrainian poet wrote: “Damnation to all, damnation to all who have become a beast! / (Instead of sonnets and octaves).” History is repeating itself a hundred years later as Putin and his Russian army are acting as beasts.

Ukraine and the world are on edge from the unprovoked attack from all sides of Ukraine by the Russian military machine, which is invading what Russia euphemistically has called its Slavic “younger” brother. Thus, Russia is playing the role of Cain bent on killing its “younger” brother, Abel. The only “threat” to Russia is Ukraine’s fledgling democracy, which twice by the will of its people overthrew attempts at despotic rule during the Orange Revolution in 2004 and the Revolution of Dignity in 2014. If that idea of power residing in the people should take root in Russia, it would instantly be the end of Putin.

Russia is playing the role of Cain bent on killing its “younger” brother, Abel.

Putin’s invasion will lead to thousands of civilian deaths, massive military casualties on both sides, and an estimated five million refugees who will flood Europe. We all know how appeasement worked in World War II. With a fiery-eyed-to-the-point-of-derangement Putin irrationally launching the invasion on Russian TV, he threatens to become a RasPutin—one who will unravel Russia and lead to its collapse.

The Russian people don’t want this war against their brother Slavs, who like Ukrainians are mostly Orthodox Christians. I am heartened by the fact that Russian intellectuals in droves are signing letters of protest to the war on Russian media outlets such as Echo of Moscow. Large protests in Russian cities outside of the capital have arisen throughout the country despite a government ban on them. In a clip on TV I noticed a Russian woman demonstrating in Novosibirsk with a sign that said “Нет войне!” (No to war!). Ukrainians are grateful for the support of such good-hearted Russians and will continue to fight ferociously for their freedom.

In these dire times, Ukraine needs the support of every just-minded person in Russia and the world who believes in freedom. Please do whatever you can in any way that you can to support the Ukrainian cause for freedom. Ukrainians, like their Russian brothers and sisters, also say “Ні війні!” (No to war!). No to this war. No to all wars. Yes to peace and freedom. Ukrainian freedom might be Russia’s last hope for the freedom of its own people.

Ode to a Petty Demon 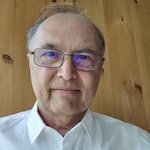 Michael M. Naydan is the Woskob Family Professor of Ukrainian Studies at the Pennsylvania State University. He has received numerous prizes for his translations, including the George S. N. Luckyj Award in Ukrainian Literature Translation from the Canadian Foundation for Ukrainian Studies in 2013. He has been writing about Ukrainian literature—and translating it—for WLT since 2005. His “Literary and Historical Sources for Understanding Ukraine” recommended reading list appeared in the July 2022 issue. Naydan and Alla Perminova’s translation of Zelensky: A Biography, by Serhii Rudenko, was published by Polity Books in 2022.