Following the first Public Safety Power Shutoff, a writer living in Northern California reflects on what she prepared to take with her should, power shutoff notwithstanding, her neighborhood ignite and firemen with evacuation orders come knocking. In an immediate future, surrounded by whatever choices she’d committed to, what, if anything, would she wish she’d grabbed?

In the run-up to PG&E’s Public Safety Power Shutoff this month in northern California, a precautionary measure that affected thirty-four counties and an estimated eight hundred thousand customers, information on what to expect and how to prepare was released by regional media outlets and posted on PG&E’s website (before it repeatedly crashed). The utility’s customers were warned that we could be without electricity for five to seven days, possibly longer. After the Diablo winds died down and the danger of power-line sparked wildfires diminished, miles of power lines would have to be inspected before power could be restored. In rugged terrain, unavoidably, that inspection process would take considerable time and manpower. San Jose’s mayor advised his constituents to “shelter in place”—language typically reserved for shooter assaults and earthquake aftermaths. A fuming Governor Newsom, on record, called the extensive shutoff  “outrageous.” Following the devastating 2018 Camp Fire, responsible for eighty-five deaths, the destruction of fourteen thousand structures, and the displacement of thousands, PG&E management deemed the October 2019 shutoff necessary. The correct/incorrectness of that judgment continues to be debated.

I’m a native of the North Carolina coast. My family’s livelihood depended on my father’s ability to harvest crops in the fall. I learned early about ruinous hurricanes and how the community hunkered down in expectation of unusually high winds and copious amounts of water. I have lived almost thirty years in California’s Bay Area, fifteen of those in the Santa Cruz Mountains, and have not similarly adapted—or come anywhere close to adapting—to the threat of wildfires. Wildfires scare me senseless.

In advance of the power shutoff, I followed all public safety instructions: gassed up the car, stockpiled cash/water/canned goods, fully charged my cell phone, charged the solar charger that I’d rely on to charge my cell phone once electrical sockets proved useless. At the front door of my house, I also began to stack items that I thought I could haul house door to car door in ten minutes should, power shutoff notwithstanding, my neighborhood ignite and firemen with evacuation orders come knocking. Ten minutes had been the get-out lead time for many who lived in Paradise, a town decimated by the Camp Fire. Rationally or irrationally, I took that number as my guide. On October 10, my husband was on a two-week camping trip in Utah. To preserve any of the tangibles we owned would depend, if it came to it, on my solo speed and hefting ability.

What can one live without, survival-wise, sentiment-wise? Such inchoate notions determine grab-and-go decisions.

What can one live without, survival-wise, sentiment-wise? Such inchoate notions determine grab-and-go decisions. My husband is a painter; there are 4 x 4 (and larger) paintings on every wall of the house. No matter how much I might want to do so, getting those larger paintings out of the house and into a Mazda 3 wasn’t an option. His smaller collages, check. I couldn’t take the favorite wicker chair inherited from an aunt and shipped from North Carolina, so should I, instead, take the pillow that lived on it? I couldn’t take every book on every shelf, but how to choose? Any elimination was agonizing. Surprising myself, I quickly grabbed Nadezhda Krupskaya’s Memories of Lenin, a text I’d relied on to research one of my novels and for which I apparently nursed an attachment that ran deeper than previously credited. I considered filling a suitcase with poetry collections (slimmer volumes = more volumes), but even then I had to pick and choose: Berryman? Burkard? Carson? Dugan? Hejinian? Lundy Martin? Young? Un-digitized photographs. Almost every fire survivor references family photographs, saved or lost. But of the larger and smaller framed photos in my study, all irreplaceable, many of them photographs of the dead, how to prioritize? Again, I surprised myself, snatching photos of my parents, my brother, but leaving the photograph of my paternal grandparents where it tilted. What reasoning, what qualifier, was in operation here? Relatives I’d known longer? Relatives closer to my branch of the family tree? One relief: I wouldn’t, last minute, have to search for and attempt to corral our now deceased cat who’d patrolled the neighborhood on a schedule of his own choosing. How to bear the torment of leaving behind a pet?

As I skittered about, collecting without feeling entirely confident about what I collected, I tried this ruse: in an immediate future, surrounded by whatever choices I’d committed to, what, if anything, would I wish I’d grabbed? As a packing aid, that visualizing experiment proved colossally unhelpful. In terms of personal alarm, it upped the ante. In my mental projection, I didn’t make it to the afterward. Instead, my imaging got stuck on fleeing—the rushing, the hauling, the panic amid a backdrop of smoke and flames.

Are they personality tests, grab-and-go bags? Red Flag Warning lifted, returning the front-door stash to former position, I evaluated (somewhat more dispassionately) my practical versus emotional selections. In the practical column: medications, an extra pair of glasses, a post-three-basal-cell-carcinomas hat, passports, a sheet containing the dozens of passwords I can never remember, a meager amount of clothing. In the emotional: a mother-made quilt, five framed photos, seven collages, two suitcases of books, my father’s fishing lures, a hundred-year-old, fragile, exceedingly difficult to transport hurricane lamp. Conclusion: I seemed to be able to foresee living in the same pair of jeans for weeks but could not face a future that failed to include a cracked keepsake with tattered wick.

At San Jose State, one of my showcase-the-university responsibilities is to write up a faculty news and notes column, highlighting recent scholarship, publications, and faculty-as-experts quotes from hither and yon. Scarcely a month goes by that I don’t report on Dr. Craig Clements, fire weather meteorologist. He is, in the Bay Area, a go-to fire behavior authority. With a “truck-mounted Doppler lidar system,” he and his assistants drive into active wildfire areas to measure fire plumes. As Clements has explained many times over, wildfires “generally divide into wind-driven or plume-dominated.” Clements and team study plume dynamics with a goal of better predicting fire behavior. His research is in no way divisive; it’s information the whole of California can get behind. As befits his now-cemented role as fire weather spokesperson, Clements is routinely interviewed at the beginning, middle, and end of each fire season. Congenially he repeats and covers the basics. “In California, we have a lot of green grass in the spring that’s cured by June; brown grass makes a very fire-prone fuel,” he recently told Earth Science. “Fire weather is determined by temperature, humidity and wind; and the worst combination is hot, dry and windy.”

Something I’ve noticed while synopsizing interviews with Clements about his work: I pay exceedingly careful attention to the phrasing. I deconstruct his comments in a fashion more suited to the study of a literary text. In parsing his dispassionate, scientific feedback, I look for any hiccups in tone, any fudging in answering the questions asked. What I am really looking for, hoping for, is reassurance. Wildfires are being studied; scientists are on the case. Progress is being made. Freaking out is ill-advised. Freaking out is counterproductive.

What I am really looking for, hoping for, is reassurance. Wildfires are being studied; scientists are on the case.

A few days after power returned to my neighborhood, I headed off to get a flu shot in hopes of diminishing my subjected risk to a more predictable malady. As previously advised, I told the shot-giver I wasn’t “great with needles” but wouldn’t pass out if I didn’t “see the needle in advance.” Based on experience, I spoke those words without making eye contact in order to avoid registering the pity or impatience such wimpiness evoked in health-care professionals whose stock and trade is needles.

During the immunization prep, to distract me or to entertain herself, the technician chatted about the power shutoff. “I never follow the news,” she said. Although multiple friends had forwarded alerts and texted warnings, she’d passed on “loading up on jars of peanut butter.” There had been power outages before; there would be power outages again. Because gas prices had spiked at her neighborhood station, she’d also refused to “top off her tank,” assuming she’d have enough fuel to get by for the duration. “People get so stressed,” she scoffed. “Me, I’m not a stresser.”

On needle alert, I mumbled a cautious, eminently nonjudgmental response on the order of: “Oh?” or “Yeah?” The woman wielded a needle.

“Ready?” she asked, before the jab.

Even inclined to respond, I had no time. 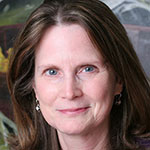 Kat Meads is the author of six previous novels, two essay collections, and several books of poetry and short fiction. Her plays have been produced in New York, Los Angeles, and the Midwest. She contributed to WLT’s “Writing the Great Recession” issue devoted to the global working class, guest-edited by Jeanetta Calhoun Mish, and an excerpt from her novel Miss Jane: The Lost Years is available here.