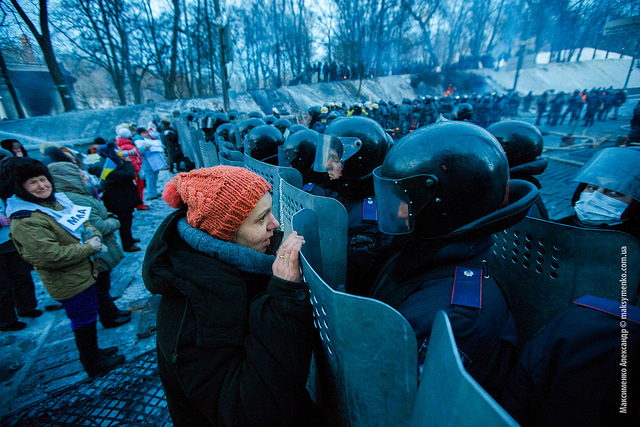 Barricade with the protesters at Hrushevskogo street on January 26, 2014 in Kiev, Ukraine. Photo Sasha Maksymenko/Flickr

The movement is precisely about what Nadya, the elderly woman, whose name means hope, said: justice. Young Ukrainians in their late teens and twenties of many different walks of life and faiths have been the prime impetus behind this movement that has galvanized the entire country behind them.

Late at night I watched a video on the Ukrainian Channel 5 website of a procession and church service in the city of Mykolaiv in honor of those who died on the Maidan in Kyiv in the struggle for freedom against Ukraine’s tyrannical government. That government brazenly abandoned the country’s constitution and initiated the process of turning it into a police state. I should point out that the city of Mykolaiv is in the southern part of Ukraine, not far from Odessa, and is a place where mostly Russian is spoken. The words of an elderly woman struck me most in the way she so succinctly explained why she was there. Her name is Nadya, which both in Ukrainian and Russian means hope. She said (in translation from the Russian): “The blood of the people is on the hands of the president [Yanukovych], Azarov [the prime minister] and the entire government. People are dying and freezing—for justice.”

While members of the Western press tend to play up the Western vs. Eastern, the Ukrainian- vs. Russian-language divide in Ukraine in a stereotypical way, they are sorely mistaken that this conflict has that overtone. It is also not purely about Eurointegration anymore, which has been for many Ukrainians largely a symbol of a better future, the promise of civilization and the rule of law. The movement is precisely about what Nadya, the elderly woman, whose name means hope, said: justice. Young Ukrainians in their late teens and twenties of many different walks of life and faiths have been the prime impetus behind this movement that has galvanized the entire country behind them. They speak Ukrainian. They speak Russian. Some even are refugees from Afghanistan, Belarus, and other countries. It makes no difference what language they speak. But just like Americans, they want a “government of the people, by the people, and for the people,” as Abraham Lincoln so powerfully put it in the Gettysburg Address. They vehemently reject a government that is blatantly corrupt and are demanding one that truly serves the people of Ukraine. There clearly would have been no economic crisis in Ukraine if not for the Yanukovych clan siphoning off over ten billion dollars a year (this according to noted economist Anders Aslund and others). As Ukrainian writer Yuri Andrukhovych, who is there on the front lines of the Maidan with his wife and family, put it in a recent posting: “The scale of what has been stolen and usurped [by the Yanukovych regime] exceeds all imagination of what human avarice is capable.” Particularly complicit in the rape of the country during the Yanukovych clan’s rule are key members of Yanukovych’s inner circle, including his prime minister, Mykola Azarov, who brands the protesters as “extremists” in interviews with Russian TV; the police chief, Vitaly Zakharchenko, who is responsible for ordering the police attacks against the protesters; and the general prosecutor, Viktor Pshonka, who is responsible for locking the protesters in prison after they are abducted from hospitals and tortured.

The courageous young journalist Tetyana Chornovol was beaten up by thugs on Christmas day 2013 for revealing Yanukovych’s and his clan’s corruption. Just do an Internet image search of her name to see her battered and bloodied face. Many demonstrators throughout Ukraine carry a copy of that picture of her, both to honor her courage as well as to show their outrage. The shout of demonstrators everywhere in the country to the cordons of police carrying out Yanukovych’s policies is “shame!”

After several days of stalling in talks with the opposition leaders and following the largely bloodless takeover of government administrative centers in eleven cities by the opposition, Yanukovych now has come around to seeking a compromise by offering to name two members of the opposition to his government. His words ring completely hollow, however, and the opposition refuses to take the bait. Yanukovych’s actions over the past four years in power, and especially over the past several weeks, show that he and his corrupt coterie cannot be believed. The only way out of the deadlock is for him and his regime to resign immediately. There can be no compromise with a tyrant, who, by his illegal actions, has completely lost his legitimacy to rule in a democratic country. His resignation is Ukraine’s only hope for an end to the standoff and for the return of the rule of law.

The United States and Europe must be considerably firmer in helping to resolve the situation. The US State Department’s revocation of visas of those in Kyiv responsible for crackdowns against the demonstrators was a good first step. Western countries can help by following the money trail from Yanukovych and his clan, which has billions of dollars squirreled away in foreign banks. Those accounts stuffed with illegally plundered gains need to be frozen, and following proper legal proceedings, should be returned to help the Ukrainian people. And the new government should implement a systematic process of lustration that follows proper legal procedures to punish those in the Yanukovych clan, including Yanukovych himself, who are complicit in illegal activities and misdeeds.

Michael M. Naydan is the Woskob Family Professor of Ukrainian Studies at the Pennsylvania State University. He has received numerous prizes for his translations, including the George S. N. Luckyj Award in Ukrainian Literature Translation from the Canadian Foundation for Ukrainian Studies in 2013. He has been writing about Ukrainian literature—and translating it—for WLT since 2005. His “Literary and Historical Sources for Understanding Ukraine” recommended reading list appeared in the July 2022 issue. Naydan and Alla Perminova’s translation of Zelensky: A Biography, by Serhii Rudenko, was published by Polity Books in 2022.