Poetry at the Crossroads: A Conversation with Kimiko Hahn 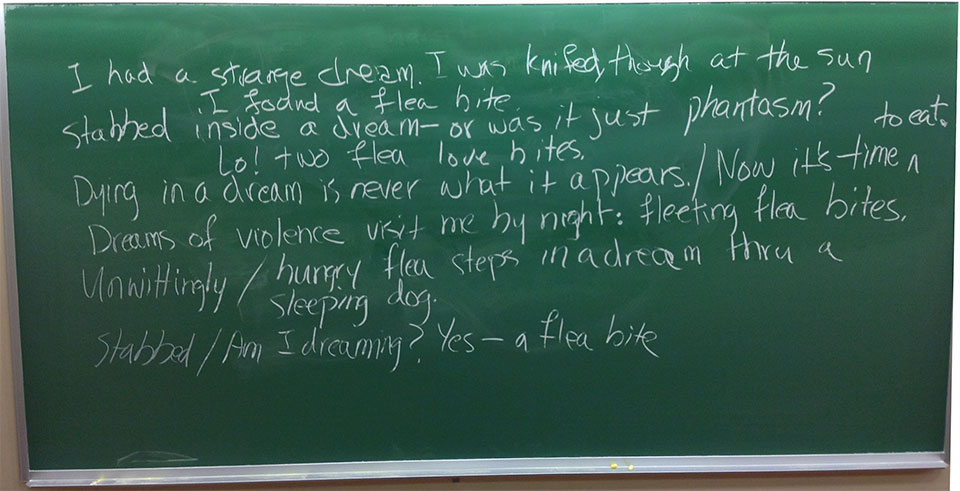 Recently, the Poetry Society of America announced award-winning poet Kimiko Hahn as its newly elected president, succeeding Ruth Kaplan. As part of our continuing series of posts devoted to National Poetry Month, I reached out to Hahn with some questions about her new role.

Daniel Simon: Congratulations on your appointment! As new president of the Poetry Society of America, what will be your first priority? Do you get your own plane to travel around the country, promoting poetry?

Kimiko Hahn: Thank you! My priority, after I get my bearings, is to explore where the PSA is in our vision of America’s crossroads. What do those crossroads look like 106 years after the founding of the PSA? An amazing example is the annual Poem in Your Pocket Day that the Academy of American Poets made national a few years ago. Very hands-on. But the crossroads is also a cyber-cloverleaf. As for the jet, it too will be cyberish. Alas.

DS: Well into its second century, the PSA’s mission is “to build a larger and more diverse audience for poetry, to encourage a deeper appreciation of the vitality and breadth of poetry in the cultural conversation, to support poets through an array of programs and awards, and to place poetry at the crossroads of American life.” Where do you see poetry fitting into our “cultural conversation” at the moment?

KH: Although it’s true that the US does not have “a public literary figure” such as Robert Frost, poetry is not as far from the average citizen as one might assume. Indulge me with an example: my own graduate students have included a first responder, lawyer, children’s librarian, pro-soccer player, ticket-taker at the circus, grade school teacher—a poet is where you least suspect she or he will be. Why? As Elizabeth Bishop wrote to May Swenson, “Poetry is a way of thinking with one’s feelings.”

Poetry is not as far from the average citizen as one might assume.

At events, poetry regains its primary foothold—as with the PSA-affiliated Our Common Home and Easter Rising Centenary events–stirring people in various ways. In a smaller moment, reading a Poetry-in-Motion subway poster, for example, a strap-hanger can feel unexpectedly refreshed. (Did I really just say “strap-hanger”?)

DS: Given World Literature Today’s focus on world literature, and assuming we begin “not with the United States as center, but with the world as circumference,” in Wai Chee Dimock’s words, what’s your sense of American poetry’s engagement on the international scene?

KH: To be honest, I am not certain how American poetry plays out in other countries, except that here there’s a privileging of the English language. I would offer that due to our incredibly mixed culture, and increasingly year by year, the diaspora in general—and immigrants in particular—shake things up. My former Queens College student, poet Rajiv Mohabir, is from India by way of Guyana. The diaspora creates a live connection.

As far as American-born writers, Tom Sleigh is a great example of someone who is engaged: a CUNY colleague who not only has done translations but has visited the Middle East a number of times and has written poetry and journalism on his experiences in Lebanon.

DS: What role does a book like Sholeh Wolpé’s Breaking the Jaws of Silence: Sixty American Poets Speak to the World play in that engagement? Are there other important transnational projects you’d like to bring to our readers’ attention?

KH: Sholeh’s anthology is a political act in several stages: after the concept, there is the rallying of writers to include, then what would typically be called “marketing” is, in such a case, agitation. Anytime there is a reading or review, there is agitation.

A very important project to do with cultural extinction: the Endangered Language Alliance. Also, Bob Holman’s film on the same subject, Language Matters.

DS: Given the remarkable rise in interest in translation at the recent Association of Writers & Writing Programs (AWP) conference in LA, where more than fifty panels were devoted to some aspect of that topic, what role to you see translation playing on the American poetry stage?

KH: Thanks to the so-called “lovely mosaic” of American culture—arising from the numerous nationalities—languages and dialects are plentiful and thriving. In the borough of Queens alone, there are 168 languages spoken. I’m sure your readers know that the children of immigrants are our youngest translators! There are grade school teachers and visiting writers who have the wherewithal to bring little workshops to children. Translation is a means to maintain a connection to a culture, to fasten, to explore for the first time.

The children of immigrants are our youngest translators.

I think American culture as a whole maintains a monolingual mind-set. But similar to my description of Queens College grad students as coming from every walk of life, there is a wealth of languages pretty much everywhere. Just the other day I saw Caucasian children practicing their Chinese out loud with their father. And my undergraduates—it’s a cliché at this point to call our campus a kind of United Nations. Urdu, Farsi, Chinese, Tagalog, Russian, . . . Spanish! I feel so lucky.

DS: How do you incorporate translation in your teaching for the Queens College MFA program?

KH: I am about to do so next week in my craft class: I love to take The Classic Tradition of Haiku, an anthology edited by Faubion Bowers ($3 Dover edition!), and have the students select one haiku that has several translations. With these and the transliteration, they must come up with their own. And they are welcome to be outrageous.

I also encourage the opposite: to use foreign words in one’s poems. And that’s nothing new, thanks to Pound and Eliot.

DS: Do you have a favorite recent book of poems or essays about poetry? What’s on your summer reading list?

KH: An old favorite, my must-have on a desert island, is String of Beads: The Poems of Princess Shikishi, translated by Hiroaki Sato. A new favorite is Lynn Emanuel’s The Nerve of It.

Reading list: I am a disciple of Helen Vendler, editor of Dickinson: Commentaries and Poems. Brilliant close readings that make me ache with pleasure. I want to look at her other similar collections. Also, I want to check out the books on the shortlist of the 2016 PEN Award for Poetry in Translation.

Summer is the best time for novels and nonfiction, and I need to get to them before my bedside stack falls on top of me. I’m looking forward to finally getting to Phil Klay’s short-story collection, Redeployment.

KH: Throw the map out and get going.

Kimiko Hahn’s recent collection, Brain Fever, was triggered by neuroscience in much the same way that previous work was triggered by Asian American identity, women’s issues, necrophilia, entomology, black lung disease, and on. She is a distinguished professor in the MFA Program in Creative Writing & Literary Translation at Queens College, CUNY, and new president of the Poetry Society of America.  Photo by Harold Schechter / W.W. Norton