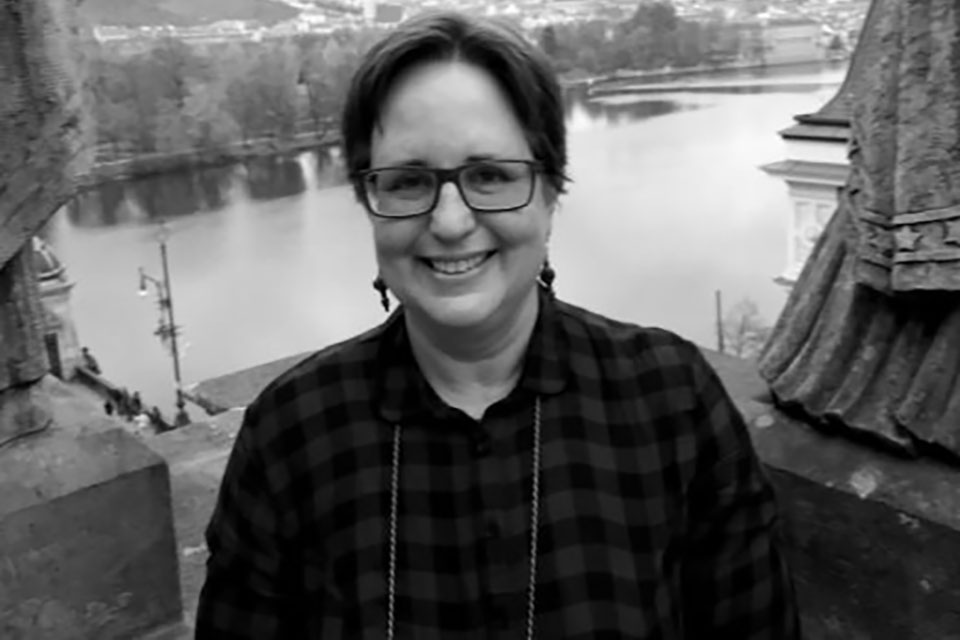 Ottilie Mulzet is the principal English-language translator of Hungarian author László Krasznahorkai, winner of numerous international honors. Together, they received the 2019 National Book Award in Translation for Mulzet’s translation of Krasznahorkai’s novel Baron Wenckheim’s Homecoming. She has also translated writing by Szilárd Borbély (WLT, Nov. 2014, 15), Gábor Schein, and others.

Veronica Esposito: You are someone who has worked extensively with László Krasznahorkai, one of the leading translated authors of our time. What institutions were key to furthering this kind of translation work?

Ottilie Mulzet: When I began translating—short feuilletons by interwar authors, such as Frigyes Karinthy—there were really just a select handful of presses that specialized in translation. There are so many more small presses now specializing in translation into English; the overall landscape is radically different, and much more varied, I think to the immense benefit of all.

What helped me specifically at the beginning were certain internet fora, such as Hungarian Literature Online, from where, for example, the Guardian picked up a story by Krasznahorkai in 2009 to run as part of a “twenty years after” series of stories from eastern Europe.

I also need to mention the translation workshops I attended in Hungary (run at the time by the Attila József circle and guided by poets András Imreh and Péter Rácz); I met a number of contemporary Hungarian authors there for the first time. Our discussions about tackling various translation problems into a wide variety of languages—there were translators in attendance from at least eight or ten languages, and our lingua franca was Hungarian—were key to my training and formation as a translator. And I feel exceptionally fortunate in being able to work at the Translator’s House in Balatonfüred, Hungary.

Esposito: What about the translation presses?

Mulzet: Equally crucial are those presses, like Krasznahorkai’s publishers New Directions, who specialize in translation. Not only are they willing to “take a gamble” on translated books, but they also provide the specialist editors that translated literature necessitates—editing a translation is an art in and of itself and differs considerably from editing a work written in English.

So there are a lot of steps involved—the support that I received as a translator from an underfunded but very determined Hungarian translation infrastructure (which itself hails from a literary and translation lineage going back many generations); presses and journals committed to translated literature; editors and other specialists at those presses who know how to work with translations; reviews and translation journalism; and last but not least, there is the recognition (and financial support) that prizes can bring. Being long- or shortlisted can be a major psychological boost, for writer and translator both.

One of Krasznahorkai’s very first instructions to me, way back in 2010, was “do not do what the English language wants.”

Esposito: If you could sum it up briefly, what seems newest and most innovative about Krasznahorkai’s writing? How does his work push the frontiers of translation forward?

Mulzet: A lot of Krasznahorkai’s writing is experimental. Readers may recall that one of his very first instructions to me, way back in 2010, was “do not do what the English language wants,” and I still try to adhere to that as much as I can. It’s not only the long sentences, it’s also how he works with language, how he uses the inherent syntactical and morphological ambiguity of Hungarian. For example, in his latest novel in English, Baron Wenckheim’s Homecoming, the identity of the protagonist of each new section is left unclear until it somehow “emerges.” This ambiguity is further enhanced in the Hungarian, a language with no gender; by contrast, the English-language reader receives certain clues earlier on in each segment.

But Krasznahorkai also pushes boundaries in other ways: he tells us that someone from the periphery of Europe can describe the current global condition, one of displacement and extreme marginalization for those not in its center. And yet the strange thing is how the conditions of the periphery—disruption, marginalization, upheaval—are coming to adhere to the center as well. I once asked Krasznahorkai how he was able to predict this, and he said, “My skin is too sensitive.”

Esposito: As someone who lives and works in Prague and is in tune with what is the exciting literature in Europe these days, what do you think we in the US are missing out on in terms of international literature?

Mulzet: Sometimes I think it’s the sheer breadth of what’s out there in any given language. I know this has to do with funding as well, but I’ve been repeatedly amazed by what gets translated into German, for example. Someone who was responsible for promoting Hungarian literature in translation once remarked to me that they don’t even bother to produce these promotional pamphlets (i.e., with short samples of “up-and-coming” writers) in German, because they translate so much without even needing that kind of nudge.

Esposito: Share a few books that strike you as emblematic of the future of translation.

Mulzet: Three books I want to mention are This Little Art, by Kate Briggs; Flights, by Olga Tokarczuk, translated by Jennifer Croft; and The White Book, by Han Kang, translated by Deborah Smith. One of these books is about translation, the two others are translated literature: to me they all express something very important about where translated literature, and perhaps even literature in general, is going. They all veer away from what I would call, for want of a better expression, “a traditional narrative arc” (even in nonfictional terms for This Little Art), embracing the form of the fragment, a kind of incompleteness that allows itself to become completed only in the mind of the reader or perhaps not at all. I am intrigued by the pauses, the blank spaces standing in for silence in The White Book, the sudden and startling juxtapositions in Flights—these seem to speak to our current condition from a different perspective than that of the traditional epic narrative. Even Krasznahorkai’s Baron Wenckheim’s Homecoming could be described as an epic made out of fragments.

Esposito: What are the translated literature community’s blind spots?

Mulzet: The translated literature community is one that I really treasure and regard as a kind of spiritual home for all of us who are “citizens of the world; citizens of nowhere.” I do feel that it is aware of its blind spots and has been doing a great deal to bring in voices that haven’t been heard before. And maybe that means it’s also pushing the overall US/UK literary community somewhere in that direction as well.

Esposito: What is one trend that you think we’ll be paying attention to for years to come?

Mulzet: English has been a so-called world language for the past hundred years or so. I think that is probably going to start changing. Languages usually hold these positions for relatively short periods of time (think of French or Latin). Although Sumerian was a clerical and liturgical language for something like a few millennia, I don’t think English will have that kind of longevity.

The other trend I fear we’ll be watching intently is, sadly, the rapid extinction of many endangered languages. I have some experience with central and inner Asian languages, and there are many languages in Siberia, for example, that are hanging on by a mere thread. This is no less sad and tragic than our planetary biodiversity, which is equally under threat. There are nations that aggressively pursue assimilationist policies; on the other hand, it seems that technical advances play a role in this even in countries where minorities aren’t under attack. Shrinking linguistic biodiversity has ripple effects even on much larger, seemingly unendangered languages.

The other trend I fear we’ll be watching intently is, sadly, the rapid extinction of many endangered languages.

Esposito: What sorts of diversity do we need more of going forward?

Mulzet: To put it briefly, more literature from the Global South, more literature by women, more literature by those in the LBGT+ community, more voices heard from endangered languages. More voices from outside the English-speaking Northern Atlantic sphere. Presses like Tilted Axis and Seagull Books (where I should note that I am series editor for the Hungarian list) are doing a marvelous job of accomplishing exactly that.

Editorial note: This is the second in a monthly series called “En Face: Conversations on the Future of Translation” that will run throughout 2020. Veronica Esposito’s conversation with Elisabeth Jaquette appeared in the winter 2020 issue.