On “Translating the Untranslatable”: Conversations with French Poets Anne Portugal and Pierre Alferi 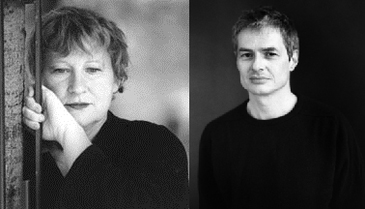 Within the rather polemically suggestive title “Translating the Untranslatable” hides a wide array of opinion and diverging thoughts. In the world of poetry, an effective translation is regarded as an infamously difficult task to achieve, and the translatability of poetry itself into multiple languages is often brought into question. On April 25 at NYU’s Maison Française, renowned francophone and anglophone poets and translators were invited in conjunction with the French Embassy book department’s “Poets’ Spring” series to explore the various cultural and linguistic nuances in translation work.

Here, Sophie L. Thunberg interviews participants Anne Portugal and Pierre Alferi, who conducted many events together in NYC, including a mixed-media, bilingual reading at Poets House.

Anne Portugal is a French poet who lives and works in Paris. Her recent work, Définitif bob, translated by Jennifer Moxley as Absolute Bob (Burning Deck Press), has been the subject of considerable critical and popular interest. Burning Deck has also published Portugal’s chapbook, Quisite Moment, translated by Rosmarie Waldrop (2008). Her work is influenced by and often references Jacques Roubaud as well as contemporary sources such as instruction booklets and video games.

Sophie L. Thunberg: Can you tell us about your poetic writing process and your current work?

Anne Portugal: I take time between each of my books because I always want to find a new structure, another disposition for the entire project. It takes years to experiment with models and to try different systems to create new sorts of verses. Here I am today, at the end of these explorations. My next book will be based on the question of landscape and the ways in which poetry can inhabit it. While in Santa Fe last year conducting a workshop, I was very impressed by a road trip into the desert, through the “painted desert,” “petrified forest,” and “monument valley.” Hearing the names of these places, one can just imagine a still life, or nature already viewed in a museum, like “dead letters.” That’s what is interesting to me now. The dimensions, too, of these areas in opposition to small gardens à la française ask the same question that we consider when reading American poetry compared to remaining loyal to the tradition of French verse. These desert places never leave me, and my new texts embody them. It’s essentially a way to test proportions—to increase, to diminish—as if looking through microscopes, anamorphoses, binoculars, field glasses, rearview mirrors, and for me it’s a good exercise in poetry.

SLT: Both New York and Paris have played important roles as creative muses in francophone and anglophone literature. What was the most interesting aspect of this trip to the United States for you?

AP: I must say I was so pleased to meet some American poets who had a great influence on me, even indirectly—such as Jerome Rothenberg, Charles Bernstein, Cole Swensen—who have significant bodies of work as well as an engagement with and commitment to contemporary poetry. Reading them is, for me, a regular practice, but hearing them and having discussions with them gives me strength and a sense of literary responsibility. I must also confess that New York City, the city itself, is a source of excitement and power, not because I want to write about it, but because it’s a matter of geometry, of combination, as I said in the first question. The most important experience during this trip was in leaving New York to go to Dia:Beacon—sailing up the Hudson River, returning to the Indian spirit, to the nineteenth century, to fallen factories, surrounded by the red-brown color of the water, of the bricks, of the trees, the real color of New York; and all that to arrive in the museum, the most conceptual place in the world, and coming back again, feeling kilometer by kilometer the progressive rising of New York, made from all these elements. Really, that was a mental trip, and a way of poetry, joining and dismantling, a lesson of composition.

SLT: There are many different cultural and linguistic nuances to translation work, which you discussed during the event “Translating the Untranslatable” held April 25 at NYU’s Maison Française. What aspects of the discussion were the most insightful to you as a poet of translated work?

AP: First, I am very glad that the word “unstranslatable” was not evoked by anyone, as if it finally became the ghost of old debates, obsessed by betrayal. On the contrary, what interested me was the sense of communal adventure that represents translation, where nobody knows much more than another but, on the contrary, learns a lot from the other in the back-and-forth. The formidable history of poetry between French and American ways of writing often came up, including the fact that without the major commitment to translating American poetry (and the same work vice versa), French poetry would not have found a new passage with inventive answers to all its exhausted questions following surrealism’s contribution to poetry after World War II. I was rather anxious about the possibility of losing a fundamental musicality, a fundamental voice when translated; but this was resolved in adherence to the main rule: to have trust in one’s translator. And we must keep in mind that translation is always a gain: it’s a puff pastry added to a puff pastry, and sometimes new lines of signification arise, even for the translated poet himself.

SLT: Poetry is, in a way, itself a translation, between lyrical components and verse, between song and creative writing, stream of consciousness and craft, soul and structure, etc. How are these various translations negotiated and revealed in your work?

AP: I don’t really agree with this definition of poetry, which supposes a state before and a state after. Poetry now has the particular grace to propose soul and structure together, emotion and verse together, like a piece of money with two faces, a block of sense and sensation, une boule de sensation-forme, as Olivier Cadiot says, or what the French poet Henri Meschonnic called la forme-sens. The same credo is in Charles Olson’s famous poem “One loves only form.” It is a fundamental matter at stake, a craft as you say, and for my part I prefer speaking of sculpture by way of syntax.

SLT: What have been the most amusing moments or untranslatable parts in translating your work?

AP: Participating in translating my work with my translators has always been a wonderful and funny linguistic adventure. Of the many examples, consider the way Rosmarie Waldrop translated the poem “Voyer en l’air” in Quisite Moment. In French, this book is already composed as a sort of riddle, where cutting a banal word begets a new one. So the trick is to simultaneously keep the joke in French and re-create it in English. Here are some titles, for example: “den gust of fresh air,” “mantic evening,” “mendous news,” or “able legs.” I also remember Jean-Jacques Poucel’s difficulty in translating the pronouns and possessive adjectives in Formula Flirt from the very long and complex French syntax and to distinguish those designating “he” and “she” (the two lovers in the book) from those that were more deictic. From one language to another, the major difference is always in the designation of plants and flowers. For example, in La formule flirt, one poem is about the notion of being constrained, as in a jail, so un if in French is perfect for its slimness and idea of sorrow, but in English the choice between “cypress” and a “yee” and other sorts of conifers leads to interminable hesitations. Finally, I can’t forget my experience when, at the Hakiyoshidai International Center in Japan, a group translating “Le plus simple appareil” into Japanese had to find an equivalent of the French word “magnolia,” then ten Japanese poets around the table proposed forty sorts of colors and shapes of magnolia to me.

SLT: Is there a language you especially enjoy hearing your poetry recited in, or would like to have your work translated into?

AP: Hearing my texts in Brazilian Portuguese would be like a phantasm or a fantasy because it’s my favorite language. I had some texts translated into Portuguese, but that isn’t quite the same. I must say all translations in any language are amazing to me; it’s always an astonishment, always a gift. In Japanese, even the direction of the writing is different, vertical like rain. The less I can have a part in it, a way to control it, the more intrigued I am—as if fully taken in by a magic trick.

Pierre Alferi is one of the most innovative contemporary French poets and the son of philosopher Jacques Derrida. Alferi’s books experiment with linguistic formulas and reflexive writing without falling into the trap of empty lyricism. In his work, all categories merge and stretch to compose a form that is constantly reinvented and critically connected to the surrounding world. His most recent works include Night and Day (translated by Kate Campbell, La Presse Poetry, 2012) and Kub Or (translated by Cole Swensen as OXO, Burning Deck).

Sophie L. Thunberg: Can you tell us about your poetic writing process and your current work?

Pierre Alferi: I write poetry when I cannot make sense of my present predicament. The process is one of clinging to scarce fragments floating around me and tying them together to avoid drowning.

SLT: Both New York and Paris have played important roles as creative muses in francophone and anglophone literature. What was the most interesting aspect of this trip to the United States for you?

PA: The aerial vision of the rain forest near Seattle. A conversation about dolls and zombies.

SLT: There are many different cultural and linguistic nuances to translation, which you discussed during the “Translating the Untranslatable” session held April 25 at NYU’s Maison Française. What aspects of the discussion were the most insightful to you as a poet of translated work?

PA: Charles Bernstein’s insights about the tone differences of spoken English and spoken French when they are imported into written poetry. Anne Portugal’s remarks on the false innocence of the present tense.

SLT: Poetry is, in a way, itself a translation, between lyrical components and verse, between song and creative writing, stream of consciousness and craft, soul and structure, etc. How are these various translations negotiated and revealed in your work?

PA: I don’t experience writing so much as a form of translation, or passage through a limit; rather, as a material assemblage, an alteration and balancing of tiny existing objects, sensations and signs. It can work as translation for a reader, yet it really is nothing but trash recycling.

SLT: What have been the most amusing moments or untranslatable parts in translating your work?

PA: When a French cultural official mistook me for Pierre Reverdy. When the great improviser Charlie Burnham played a blues parody in front of an empty audience.

SLT: Is there a language you especially enjoy hearing your poetry recited in, or would like to have your work translated in?

PA: I would love to hear one of my poems in Mandarin Chinese.

Sophie L. Thunberg is a book department intern in the Cultural Services of the French Embassy in New York.