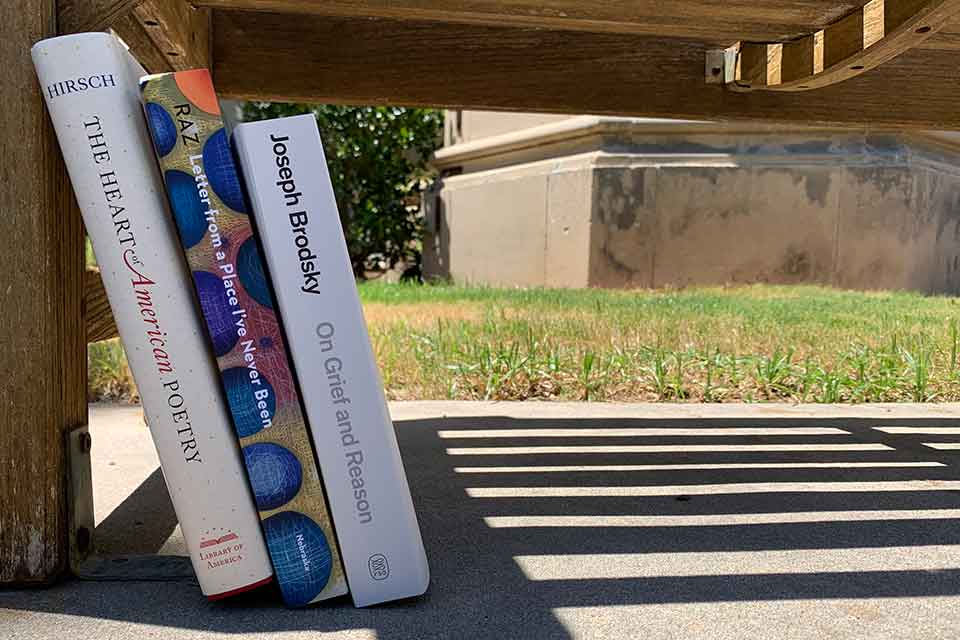 When the forecast for the next ten days promises afternoon highs ranging from 102 to 111 degrees, you can bet I’ll be looking for really thick books to pile high for as much shade, and diversion, as possible. The publishers of the following titles must have known that I delight in well-made tomes, with elegant designs and a pleasing heft when held at arm’s length. Admittedly, one could build a small house out of the Other Press’s recent illustrated centennial edition of Ulysses (720 pages), but these volumes will stack quite nicely when a simple wall will suffice.

The Heart of American Poetry

At 452 pages (not counting the front matter), Edward Hirsch’s newest compilation, The Heart of American Poetry, is a welterweight compared to his previous volume, 100 Poems to Break Your Heart, which, at 500-plus pages, casts its own satisfying shadow. Of the making of poems of the heart (and heartbreak), there is, seemingly, no end, and Hirsch serves as a masterful guide in this treacherous terrain, inviting fellow travelers—from Anne Bradstreet and Phillis Wheatley to Adrienne Rich and Joy Harjo—to accompany him into that country of the imagination called “American poetry.” In forty essays on these and three dozen additional poets in his national canon, Hirsch reminds us that “we invent ourselves as American writers—it’s not a clerisy we’re born into” and that, in this “disheartening time in our republic, a time of broken promises,” American poetry can offer a “healthy antidote . . . to the moment of our malaise.” It’s an antidote we surely need.

On Grief and Reason

Joseph Brodsky, winner of the 1987 Nobel Prize in Literature, wrote the twenty-one essays gathered in On Grief and Reason (484 pages) over the last decade of his life (1987–96). Having been forced, in 1972, into involuntary exile from the Soviet Union, the land of his birth, and eventually settling in the US, by the mid-1980s he achieved an astonishing degree of literary renown as a poet and essayist while teaching at Mount Holyoke College in South Hadley, Massachusetts.

In “An Immodest Proposal,” first delivered as the inaugural lecture at the Library of Congress when he was named US Poet Laureate in 1991, Brodsky reflects on the role of poetry in a modern democracy. After briefly surveying the status of poets from antiquity to the Enlightenment, when “the seat of power was often the seat of culture” (and poets, of course, were reserved a seat at that table), Brodsky fast-forwards to the late twentieth-century American scene, where, in his estimation, “the quantity of verse that has been penned on these shores in the last century and a half dwarfs the similar enterprise of any literature.”

Brodsky laments, however, that the audience for poetry, which he calls “this country’s greatest patrimony,” is vanishingly small. To remedy that deficit, his proposal is to increase the print runs of books by our most noted poets by a factor of a thousand, which would allow for the mass distribution of those titles in supermarkets and factories, or even bring them “to the doorstep” of every household like a utility service. “At the very least,” he writes, “an anthology of American poetry should be found in the drawer in every room in every motel in the land, next to the Bible, which will surely not object to this proximity, since it does not object to the proximity of the phone book.”

In 2022, with entire libraries of poetry available in our smartphones, the Academy of American Poets’ Poem-a-Day, and current Poet Laureate Ada Limón’s podcast The Slowdown offering ubiquitous, instantaneous poems at our fingertips and in our earbuds, Brodsky’s distribution dilemma has been solved. Having democratized poetry’s access to millions of citizens, this “supreme form of human locution” need not be restricted to those in seats of power and privilege; poetry, like electricity, pulses in the hands of all who seek it out.

Five years on from the publication of my Nebraska Poetry anthology, recently named to NPR’s “50 States” summer booklist, this bounteous new collection (445 pages) by one of my favorite Nebraska poets is a welcome compilation of Hilda Raz’s finest work. Many of Nebraska’s best-known writers, including Willa Cather, John Neihardt, and Ted Kooser, hailed from borders beyond the state but brought that outsider’s perspective to bear on the landscapes and communities they came to call home. Raz, who was born in Rochester, New York, is no exception: Letter from a Place I’ve Never Been shows the poet’s mind grappling with the state’s expansive horizons, and shibboleths. In the poem “Fast Car on Nebraska I-80: Visiting Teacher,” she writes: “driving through wet air at seven / I’d noticed the horizon did a good job / on my heavy mind: what had seemed a knot / so snarled I couldn’t get a nail in / began to unwind as I watched through the windscreen.” The poet-driver-teacher-visitor, containing multitudes, helps the reader-passenger-student-local see anew what they risk taking for granted. Isn’t that what the best poetry helps foster?