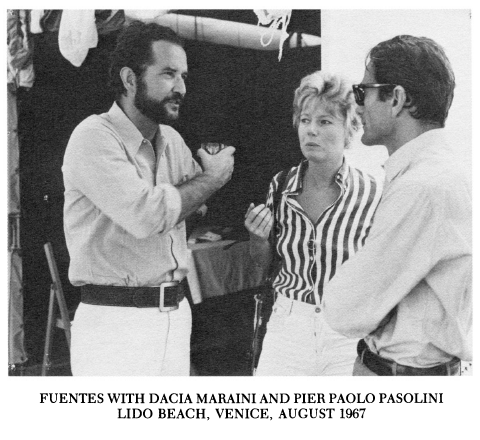 Carlos Fuentes, who died Tuesday at the age of 83, was one of Mexico's most discussed and prolific writers. He visited World Literature Today and the University of Oklahoma as the honored 1983 Puterbaugh Fellow nearly two decades ago.

"Carlos Fuentes' first books taught me that literary work is a perpetual scandal. They taught me to see, as if reading them fitted me with a special set of spectacles. With him I learned that writing fiction is always an ability to imagine and approach things, a remorse of habitude, a suspicion of ideological greed, a voracity for signs and an enthusiasm for other things."—Gustavo Sainz, "Carlos Fuentes: A Permanent Bedazzlement" from the Autumn 1983 issue of WLT.

"Any reader of the works of Carlos Fuentes is engrossed almost immediately, and any intelligent reader of the Mexican writer confidently expects to see him become one of the leading interpreters of his nation, not only for Mexicans, but for the world at large."—Robert G. Mead, Jr. "Carlos Fuentes, Mexico's Angry Novelist" from the Autumn 1964 issue of WLT (then Books Abroad).

Mead's prediction was certainly on the mark. Fuentes' most notable works include The Death of Artemio Cruz (1962), Aura (1962), The Old Gringo (1985) and Christopher Unborn (1987). Also notable is his first novel Where the Air Is Clear (La región más transparente) (1957), and Terra Nostra (1975) which won the Venezuelan Rómulo Gallegos Prize. Literature to Fuentes was both a creative art and a vehicle for furthering social progress, and over a career that produced more than twenty novels, a multitude of short stories, essays, and screenplays, he transformed and enhanced the landscape of literature.

In celebration of his life and work today, we've opened the vault to share Fuentes' essay, "On Reading and Writing Myself: How I Wrote Aura," from the the August 1983 issue of World Literature Today.