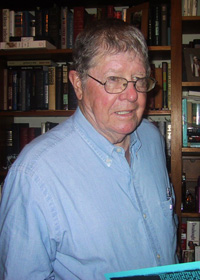 Jim Spurr left this earthy existence on Sunday, August 31, 2014, after having one of the best days of his life. No lingering, no drama. Just fell down dead in an instant. How like him to “step off” in that manner. While he was a small-town kind of guy and the officially appointed Poet Laureate of Shawnee, Oklahoma, Jim and his poetry were widely and uncritically admired throughout Oklahoma and far beyond. He was truly an icon, the “everyman” poet. He found language for poetry where almost no else thought to look or listen: a convenience store, a sports bar in Lawrence, Kansas, his own funeral, and, of course, on the four-yard line in the fourth quarter with four seconds to go. He found images in plain life and plain language and wrote them down with all the pathos and humor anyone could want. Even the derelict patrons of the skuzzy bars and the political right-wingers that he wrote about with their distrust of poetry could appreciate Spurr’s verse. Spurr always said he came of age in the 1950s and couldn’t progress beyond that point, but that’s only half true. While much of his poetry is somewhat nostalgic, it is never dreary. It is “young” poetry about “old times.” His reading performances were also works of art. Those of us who knew him, or knew his poetry, will remember him for his kindness, his insights, and for his words, which made our carnal existence more palatable–and fun!

Jim Spurr’s books, Open Mike / Thursday Night (2008) and Hail Mary on Two (2012), were both finalists for the Oklahoma Book Award. His book It’s Cool at 2AM (2010) received second place at the Palettes and Quills contest in Ithaca, New York. Since 1993, Spurr cohosted the popular Shawnee poetry reading. He was a frequent reader at poetry venues around the state, including the Scissortail, the Red Dirt Writing Festival in Shawnee, and the Woody Guthrie Folk Festival in Okemah. Spurr has poems in Array, Avocet, Blood & Thunder, Broomwood Journal, California Quarterly, Clark Street Review, Crosstimbers, Iconoclast, Poetry Depth Quarterly, Main Street Rag, Nerve Cowboy, Rattle, and Sugar Mule. He earned his undergraduate degree from Oklahoma Baptist University and was a retired insurance adjuster and honorably discharged veteran of the 82 Airborne. He lived in Shawnee with his wife, Aline.

Dorothy Alexander is a poet, storyteller, and publisher from Cheyenne, Oklahoma. As co-owner of Village Books Press, she focuses on publishing Oklahoma poets. She has authored four collections of poetry herself, including her book Lessons from an Oklahoma Girlhood (2008) and Travelin’ Music: A Poetic Tribute to Woody Guthrie (2010).