Remembering Mary Oliver: The Poetics of Grieving and Comfort

In an American age characterized by fragmentation and political division, it takes the passage of a literary icon like Mary Oliver to remind us how we have been bound together over the years by words and ideas masterfully crafted that have left an indelible mark on our cultural identity.

In her essay “Can Poetry Matter?” (2010), Margaret Randall evokes Oliver’s poetry in her remembrance of a friend’s life and legacy upon her death, noting that:

Poetry mattered to my friend Cary Herz. Just a couple of weeks before her death from ovarian cancer, she sent a goodbye email to her friends. She ended her message with a Mary Oliver poem, her parting gift. The poem was “Blackwater Woods,” and some of the lines that continue to sustain me are “Look, the trees / are turning / their own bodies / into pillars // of light . . . everything / I have ever learned // in my lifetime / leads me back to this: the fires / and the black river of loss / whose other side // is salvation, whose meaning / none of us will ever know . . .”

The gift allowed us to breathe when we received it, and lifted us in recognition when the rabbi read it at Cary’s graveside. That poem continues to remind us of our friend, her gentle sensibility, meaningful photography, fierce resistance, and gracious farewell. But it does much more than that. The lessons it holds move on many levels. I can think of many such instances when a particular poem or group of poems tempered sorrow, imbued me with courage, flashed an unexpected image, or simply expressed an idea or emotion as nothing else could. (WLT, March 2010)

It is in this same spirit that Meena Alexander, who died this past November, reminded us that “In a time of violence, the task of poetry is in some way to reconcile us to our world and to allow us a measure of tenderness and grace with which to exist. I believe this very deeply, and I see it as an effort to enter into the complications of the moment, even if they are violent; but through that, in some measure, poetry’s task is to reconcile us to the world—not to accept it at face value or to assent to things that are wrong, but to reconcile one in a larger sense, to return us in love, the province of the imagination, to the scope of our mortal lives” (“What Use Is Poetry?” WLT, Sept. 2013).

To celebrate Mary Oliver’s life and work, we went into our archives and retrieved these three reviews of Oliver’s work, all written by longtime World Literature Today contributor Doris Earnshaw, who herself died just a little over a year ago at the age of ninety-three. Rest in power, Mary Oliver. You will be sorely missed.

The night sky, that graduate school of poets, seems to teach its lovers compassion (the spacious view) and the pleasure of unhurried yet precise movement.

Twelve moon poems (“Strawberry Moon,’’ “Wolf Moon,” “Sturgeon Moon”) structure the passing of a year in this fourth collection of the widely published poems of Mary Oliver. Her subject is nature. She knows the life of worms, frogs, snakes, bears, sharks, horses, turtles, raccoons, and goats—how they suffer from eating poisonous plants, from mating in the spring, from dreaming; how patient they are. Her sketches of human character have the intensity of ballads: “Strawberry Moon” tells of great-aunt Elizabeth Fortune hiding forty years in an attic for shame after an illegitimate pregnancy: “I asked my mother: / what happened to the man? she answered: / Nothing.” Oliver’s lyrics belong to the tradition of the poets of the night sky—shepherds, cowboys, exiles from town (I think of Dante)—whose heart centers on earth but whose mind is illuminated by the night spectacle. “Being country bred,” she writes, “I am at ease in the dark.” The opening poem “Sleeping in the Forest” describes the stretch of body and mind: “I slept / . . . a stone / on the riverbed, nothing / between me and the stars / but my thoughts, and they floated / light as moths among the branches.” The night sky, that graduate school of poets, seems to teach its lovers compassion (the spacious view) and the pleasure of unhurried yet precise movement. No taste of bitterness is here, no stylish ambiguity, no dazzling observation of animals as Marianne Moore would do, but a nourishing vision of life as one seamless thread and an appreciation of the animal and human condition. The major emotional undercurrent is joy. April’s “Pink Moon—The Pond” is a meditation on frogs: “you see everything / through their eyes / their joy, their necessity.” The last moon poem, March’s “Worm Moon,” expresses a scriptural beatitude: “And the name of every place / is joyful.” James Dickey, in a review of Oliver’s first volume, No Voyage and Other Poems (1965), remarked that her lyrics were “good but predictably good” and that she would grow as a poet because of her fine ear and eye. Some of the present poems (“Neutralities,” “Christmas Poem”) are listless “poems that touch the heart,” and the conversational form is often lax; but the majority are strong in their praise, wonder, and wisdom. From her Midwest beginnings, Oliver moved to the East Coast. She lived at Stapleton, the estate of Edna St. Vincent Millay, whose influence she acknowledges. She has won numerous prizes and national awards for her work.—Doris Earnshaw, University of California, Davis (WLT, Winter 1981) 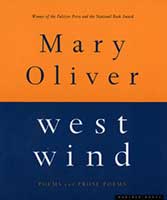 An elegiac and stately tone pervades the poems of West Wind, often based on the simplest of two-part forms: “proposition/resolution,” or “details to generality,” or experience to understanding. This is the universal thought pattern of induction to deduction and, of course, the sonnet. Mary Oliver clothes the clear logic of problem/resolution in language that rolls on the tongue so pleasantly. Her thoughts are of death and time passing, the work of the poet, silence and listening. She paints her landscape: lakes and fields, oak trees, ospreys, stars, a black snake molting, her dog’s happiness running through wet leaves the morning after a storm. The poems’ syntax of one or two sentences beautifully models the thought. Part 2, “West Wind,” is a sequence of thirteen poems and prose poems that reads like a companion poem to her loved Shelley, whose “Ode to the West Wind” invokes the “wild spirit of the autumnal wind” as both destroyer and preserver, the herald of spring. The poems take many forms: a narrative about a mockingbird correcting human action; a meditation on Shelley himself, in Pisa with his friend Hunt; a humorous and wise poem on the “small but perfect spears” of love. Oliver’s intimacy (lack of fear) with nature allows her to form stunning projections, as in the final poem, “Have You Ever Tried to Enter the Long Black Branches?” in which she chastises those who see the world as personal entertainment, who are “Never to enter the sea and notice how the water divides / with perfect courtesy, to let you in!” Her poems follow Frost’s dictum exactly as they move “from delight to wisdom,” and they are always a joy to read and cherish.—Doris Earnshaw, University of California, Davis (WLT, Summer 1998)

The poems of Mary Oliver express gratitude for life and humor. “There is only one question: / how to love this world.” 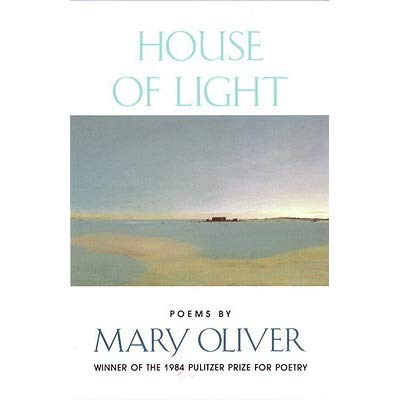 “What the poet aspires to may be realized in the poem.” The poems of Mary Oliver’s eighth collection express gratitude for life and humor. The arch tone of a brilliant line has the delicacy of Japanese tanka. She tells us that “A poem should always have birds in it,” and her line lightens the difficult moment of truth between two women in “Singapore”: “Yes, a person wants to stand in a happy place, in a poem.” “The Gift” amuses and thrills the reader with the vision of the poet playing the music of Mahler in a field for a mockingbird in thanks for the bird’s vigorous song. Thereafter, she writes, “a little Mahler spills through the sputters of his song.” Another poem thanks Mahler for being, perhaps like the mockingbird, a “willing and lilting companion.” The poet, a Pulitzer Prize winner, creates a mood like the snow “falling perfectly at ease”; her snakes, swans, owls, and Serengeti lion fall into lives and lines perfectly at ease. In “Spring” we find the summing up: “There is only one question: / how to love this world.”—Doris Earnshaw, University of California, Davis (WLT, Autumn 1990)