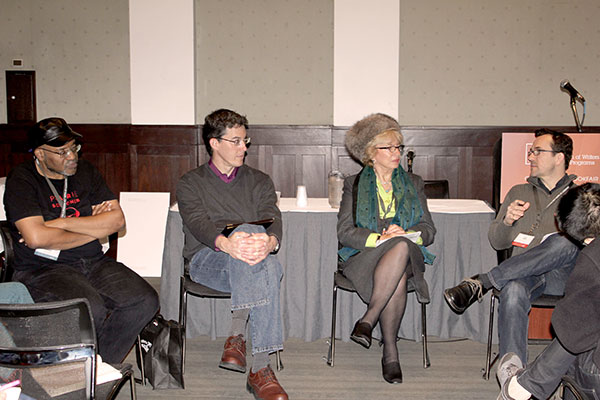 Two weeks ago, at the 2013 conference of the Association of Writers & Writing Programs in Boston, I spoke on the panel “Looking Out: American Journals on the World Stage” along with Kwame Dawes of Prairie Schooner and Paul Reyes of VQR. The three of us reflected on the ways in which our respective journals seek to engage an internationalist perspective in our content and editorial interests. Each editor spoke about the importance of enlarging and diversifying what our “national” discourse encompasses, and how a “deep empathy” with voices and cultures from around the world enriches American literary discourse.

As editor in chief of WLT, I emphasized our long history of promoting literature in translation, minority languages and literatures, and gender equity—in 2012, 40 percent of the essays, poetry, fiction, and interviews published by WLT were translated from other languages; writers from more than fifty different countries were represented in our pages; and roughly half the authors featured were women.

Even as the world becomes more and more globalized in the 21st century, literary journals will seek to find the universal in the local. It is perhaps fitting that three journals founded in the 1920s in “provincial” backwaters like Charlottesville, Virginia; Lincoln, Nebraska; and Norman, Oklahoma, should be at the vanguard of expanding that international purview. For WLT—in the words of Bernice Duncan, our fifth editor (1966–67)—our mission will always be to enlighten readers by “keeping a finger on the mental pulse of the world.”