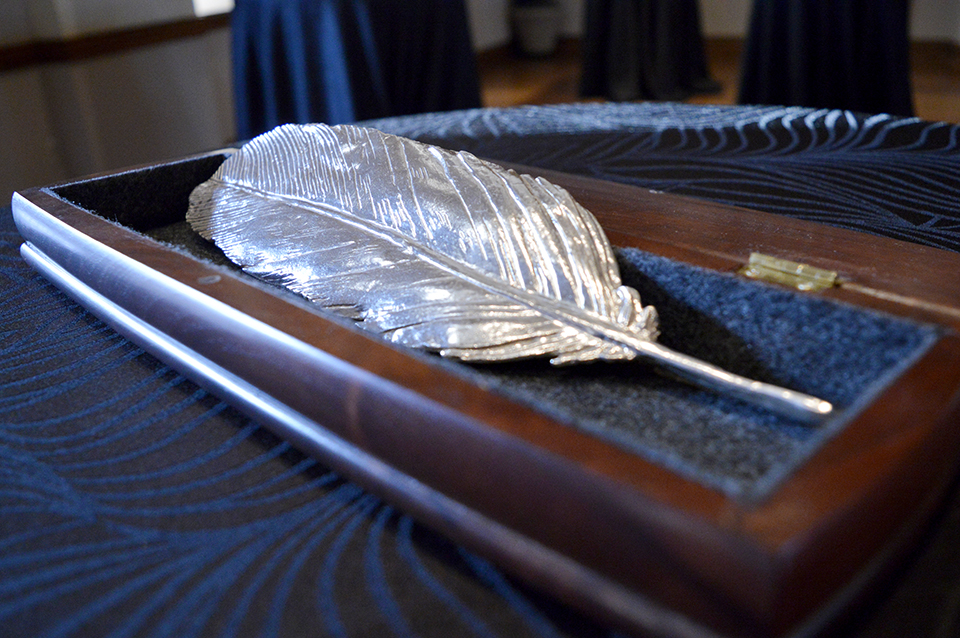 Fifty years ago this week, Books Abroad editor Ivar Ivask traveled to Menton, France, to announce the establishment of the Books Abroad International Prize for Literature, the forerunner of the Neustadt Prize, at the PEN International Congress. (Arthur Miller, who presided over the congress, had been elected the first American president of PEN International in 1965.) Throughout 2020, World Literature Today will celebrate the fiftieth anniversary of the prize, which was first awarded to Giuseppe Ungaretti in March 1970. Formal ceremonies marking the anniversary are scheduled to take place at the fall 2020 Neustadt Festival, which will feature the launch of Dispatches from the Republic of Letters: Celebrating Fifty Years of the Neustadt International Prize for Literature, an anthology that gathers the keynote talks by all twenty-five laureates from Ungaretti to Edwidge Danticat, plus the accompanying encomium by the respective jurors who nominated them.

Since its inception, Books Abroad has manifested a lively concern for the annual choices made by the Swedish Academy for that most respected of writing awards, the Nobel Prize for Literature. Under the original editorial aegis of Roy Temple House, we find in the quarterly such critical symposia as “Prodding the Nobel Prize Committee” (1932), “Nominations for the Nobel Prize for Literature” (1935), and “Books Abroad’s Super-Nobel Election” (1940). The second editor, Ernst Erich Noth, sponsored an exchange of ideas entitled “What’s Wrong with the Nobel Prize?” (Spring/Summer 1951), and the late Robert Vlach convened the most comprehensive discussion of all, the “Nobel Prize Symposium” of 1967. As guest editor of the last named issue, Professor Herbert Howarth (University of Pennsylvania) even sketched some possible guidelines for the Swedish Academy to consider, such as “. . . not to the best-wishing maker but to the best maker-even if the best maker appears to wish ill.” He recommended that poets and dramatists be considered on a par with novelists; that the Prize should not necessarily crown a life’s work, but should upon occasion direct attention to an important life work in progress; finally, that authors from the less-known literatures should not be regarded as the least eligible.

In spite of such critical scrutiny, in Books Abroad as in other journals throughout the world, no other important international literary prize has been established. To date, there is no competition to the criteria set up by the Swedish Academy, with its attendant perquisites of professional status and monetary compensation. We propose therefore that Books Abroad, as the oldest international literary review in the English language, sponsor the establishment of a new award to be known as the Books Abroad International Prize for Literature.

In the beginning, the Prize is to be awarded in alternate years, later perhaps annually. The choice will be announced in February-fittingly, it is felt, since Books Abroad began publication with the Winter issue of 1927. The first award is to be made in 1970, the amount to be $10,000 or more, contingent upon support from certain foundations and private donors who will be approached. The award will be presented at the University of Oklahoma in Norman approximately thirty days after the announcement of the choice.

Candidates for the Prize will be reviewed by an international Board of Selection which will meet for a three-day weekend conference in February of the year in which the Prize is to be offered. The Board will meet at the University of Oklahoma in Norman, which sponsors the publication of Books Abroad. In addition to the Editor of the quarterly, who will be the only permanent member, the Board is to include eleven members to be chosen by the Editor in consultation with the Editorial Board of Books Abroad. With the exception of the Editor, the Board of Selection will be composed of new members for each year that the Prize is to be offered. The following Board is suggested for the Prize of 1970:

Eligibility. Each Board member is invited to present to the jury a maximum of three names to be considered for the Prize. The final choice shall be made by balloting, the winner to be decided by a majority vote (seven votes or more). No writer shall be eligible whose work is not currently available or cannot be presented to the Board in a major Western language.

Candidates may also be suggested by the public at large to the Editor of Books Abroad, but without any guarantee that they will necessarily be presented to the Board for consideration.

In years in which the Prize is awarded, Books Abroad will devote one of its issues to a critical symposium on the work of the recipient. The University of Oklahoma Press will also consider the publication of a book by or on the laureate chosen for the International Prize.

Since Books Abroad is only the international forum charged with administering the Prize, the University of Oklahoma will seek contributions from foundations, publishers, and individuals in order to make the award financially worthwhile and representative of American concern for genuine achievement in world literature.

[i] Ivask recounts the details of the first jury’s proceedings—which almost ended in a deadlocked vote, until Ivask broke the tie between Ungaretti and the leftist Chilean poet Pablo Neruda—in “Giuseppe Ungaretti: Laureate of Our First International Prize for Literature,” Books Abroad 44, no. 2 (Spring 1970): 191–94. Having grown up in the Soviet-controlled Baltics during the interwar years and experienced the Cold War as an exile in the West, Ivask was well aware of the implications of his vote.