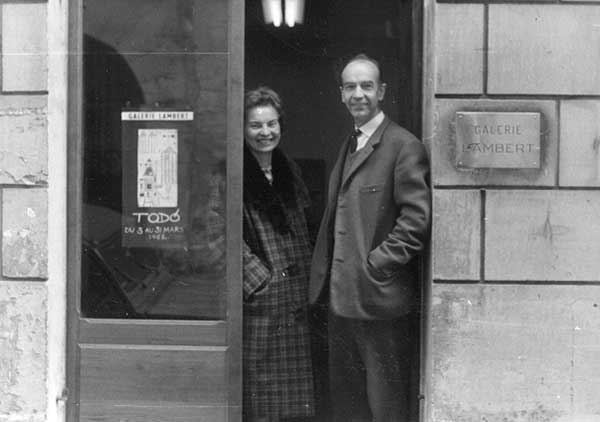 Zofia and Kazimierz Romanowicz in front of the Galerie Lambert in 1962 / Courtesy of the Archiwum Emigracji, Biblioteka Uniwersytecka, Toruń, Poland

For more, read these four poems by Zofia Romanowicz, newly translated into English.

Noted postwar Polish novelist Zofia Romanowicz, née Górska (Radom, Poland, 18 October 1922 – Lailly-en-Val, France, 28 March 2010), was a budding high school poet when she was arrested at age eighteen by the Nazis on January 25, 1941, for resistance activities. Sentenced to death, she spent over a year in the prisons of Skarżysko-Kamienna, Kielce, and Pińczów before being deported to Ravensbrück in April 1942 with the note “Rückkehr unverwünscht” (return undesirable)—a continuation of her death sentence. In September 1943 she was transferred to the Flossenbürg subcamp of Neu-Rohlau in Bohemia. In the spring of 1945 she escaped with two friends during an evacuation march. The three women reached the Karlovy Vary hospital in late April, where they were hidden by hospital nurses in the mental ward, only to return to Neu-Rohlau upon learning of the German capitulation. In June, Romanowicz reached the American sector and was taken to Rome by the head of the Polish Red Cross representative. In 1946 she settled in Paris and earned her BA in medieval French literature at the Sorbonne. Together with her husband, Kazimierz Romanowicz, an officer in the Polish Second Corps, they managed the bookstore and publishing house Libella and an art gallery, the Galerie Lambert, and raised their daughter, Barbara. Both places became rallying points for the émigré Polish community and Polish dissidents until the mid-1990s, when the Romanowiczes closed shop due to their “retirement.”

Then, on June 16, an international colloquium featured scholars from Poland, France, and the United States. Entitled “Zofia Romanowicz, Novelist (1922–2010): The Voice of a Survivor of Nazi Barbarism,” it was hosted by the Polish Historical and Literary Society in Paris, a gathering point for Polish émigrés since the mid-nineteenth century. It was held at the society’s headquarters on Ile St. Louis, just around the corner from the Galerie Lambert and the Libella bookstore where Zofia and Kazimierz Romanowicz made their home for nearly fifty years. The colloquium’s “homecoming” feeling was sustained by the presence of the event’s chair, daughter Barbara Romanowicz, a seismologist at the University of California Berkeley and the Collège de France, who shared personal memories of her mother’s personality and character. The colloquium gathered Morawiec; Anna Jamrozek-Sowa, assistant professor of literature at the University of Rzeszów and author of Life Repeated: The Writings of Zofia Romanowicz; French diplomat and translator Erik Veaux; Hélène Włodarczyk, professor of Polish literature at the University of Sorbonne in Paris; and myself, a translator, literary critic, and twentieth-century European history professor at the University of Tennessee at Martin.

The colloquium’s proceedings, slated to appear in the September 2016 issue of the Paris-based Revue d’Etudes Slaves, along with Morawiec’s, Królikowska’s, and Jamrozek-Sowa’s monographs, are among a growing number of studies that testify to a renewed interest in Zofia Romanowicz’s work.1 Jamrozek-Sowa concentrates on Zofia Romanowicz’s biography and on the impact of the Holocaust and the Cold War on her writing, while Królikowska focuses on the experimental aspect of her novels. Morawiec produced an indispensable introduction to her work. With an impressive 134-page bibliography of her writings and catalog of every translation, review, and essay written about her to date, his study is a genealogy of Zofia Romanowicz’s works. These three scholars agree about the sophistication of her work, the creative nature of her language, and the existential and cultural splits in her life owing to historical tragedy. 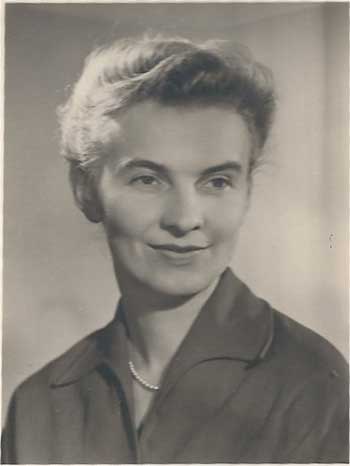 Zofia Romanowicz’s life and literary career were twice thwarted by World War II and the Cold War. While at Ravensbrück and Neu-Rohlau, poetry helped her survive. Reconstructing her life after the war in a new country with an unfamiliar culture and language, she turned to prose, writing detective novels for a few years to support herself. Her literary career saw a meteoric rise after the publication of her first novel, Baśka i Barbara, in Paris in 1956 and in Poland in 1958. Her wartime poetry was published in Poland as well as her translation of Provençal troubadour poetry.2 Her visibility increased abroad as well, with translations of Passage Through the Red Sea into French in 1961 and in English and German in 1962, and the publication of the Polish version of the novelin Warsaw in 1961. She began serving on the jury of the London-based “Wiadomość” Literary Prize. In 1964 she was awarded the Kościelski Award, a prestigious émigré prize given to confirmed literary talents under the age of forty. Her career on the Polish scene, however, was interrupted that same year when the Polish Secret Services, accusing Zofia and Kazimierz Romanowicz of anti-Soviet agitation, forbade the publication of her works in Poland.

Romanowicz urges her readers to respect the characters’ right to private mourning and to honor the victims by memorializing their stories within themselves.

Zofia Romanowicz’s star continued to rise among intellectual and artistic circles in Paris, London, and New York, where her books were accessible in the original Polish versions and in French, German, English, Romanian, and Israeli translations. She published seven novels and one volume of short stories between 1963 and 1984.3 Of these, only The Kindness of Blue (1968) was translated into French and Romanian: it became a best-seller. In 1987, breaking a twenty-five year ban on her works in Poland, the Warsaw Catholic publishing house PAX published the Polish original of the novel; it thus became part of Poland’s cultural transition to democracy.4 The end of the Cold War ushered in the third and last phase of Zofia Romanowicz’s work. Her last two and arguably her most achieved novels were published in Poland.5 In 2001 she received the Prize of the Ministry of Culture and National Heritage for the totality of her work. In 2002 the novel Na Wyspie was translated into French.6 This was her last major publication.

Imprisonment and emigration had a profound influence on Zofia Romanowicz’s choice of themes and narrative structure. Several cognitive dissonance–inducing binary contrasts appear: life and death, freedom and incarceration, darkness and light, remembrance and oblivion, control and passiveness. Conjugated at all levels and in all modes, these opposites create an intricate structure that becomes particularly impressive in the last two novels, The Escalator and The Tribulations of Father P. In these two novels, in which aging Holocaust survivors attempt a final confrontation with their memories, Zofia Romanowicz urges her readers to respect the characters’ right to private mourning and to honor the victims by memorializing their stories within themselves. Looking at her entire body of work, it becomes clear that the most unique aspect of her Holocaust testimony is the fact that she gives an evolutionary perspective on survivors’ coping strategies: through her youthful, middle-aged, and twilight characters, we gain invaluable insights into the ways in which memory and pain cry out in their attempt to find closure.

Romanowicz’s work is more than the sum of her camp experiences and émigré life, however. Experimentation was very important to her, and it represents one way in which she was an important witness of her times. She had a wide register of writing techniques: psychological and structuralist novels, poems, short stories, detective novels, and essays. She proved her linguistic expertise in the edited and translated volume of medieval love poems. Her perspective from the “other” Europe enabled her to use the postmodernist theoretical-intellectual arsenal without being trapped by it. She imbued Nouveau Roman techniques with an anthropo-philosophical purpose and with the urgency of life and death situations. The accuracy of her depictions of the fluctuations of post-traumatic consciousness, of the soul leave-taking from the body as a survival mechanism, and of narcolepsy were confirmed by discoveries in the fields of neuroscience and psychology. The themes of imprisonment and emigration formed her creative core, yet she never ceased weaving them with increasingly complex and rich connections, thus giving her works an aesthetic texture and continuity only seen in the greatest writers.

Romanowicz was the first woman Holocaust survivor to witness as an artist, not as a victim, and to affirm the victory of life and beauty over death and evil.

Zofia Romanowicz transgressed the limits assigned to women of letters in Western society. She was the first to address the issue of raising a child in a bilingual, bicultural home, to describe female adolescent feelings from a woman’s perspective, and to show sensitivity to the plight of immigrants in postwar Europe. She was the first woman Holocaust survivor to witness as an artist, not as a victim, and to affirm the victory of life and beauty over death and evil. What most made her an accomplished woman of letters was the universal writer’s drive so well defined by Québécois writer Hélène Dorion:

We write to reconstruct within ourselves the fragments of beauty that were lost along our lifelong history of dreams and shortcomings, of segues and thirsting. . . . We write perhaps to touch this fury of eternity that haunts us . . . to rediscover childhood’s vanished castles whose promises we carry, rebuilding them again and again.7