This piece appears in Music & Literature no. 6, which includes 100 pages of new literature on and by Dubravka Ugrešić. Ugrešić was announced as the winner of the 2016 Neustadt International Prize for Literature last week during the 2015 Neustadt Festival banquet. 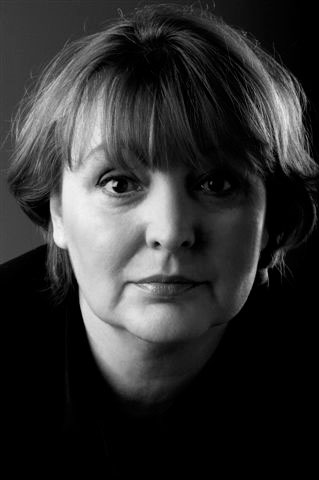 In the epilogue to her “little patchwork novel” Steffie Cvek in the Jaws of Life—a coda she titles the “final touches to the garment”—Dubravka Ugrešić offers an intriguing bit of self-criticism about the story we’ve just read: “Honesty compels the author to confess that she had greater aspirations. In the character of Steffie Cvek she secretly hoped to create a female peer of Miloš Hrma, the hero of Bohumil Hrabal’s Closely Watched Trains. However, wilting like poor Miloš’s lily, the author did not succeed in this by no means easy task.”

Far be it for a critic to hope to disillusion an author of her sense of failure. Nevertheless, it is interesting to consider the connections linking Miloš and Steffie. Because in doing so, it emerges that their differences are as meaningful and revealing as their similarities.

First a quick refresher on Hrabal’s beloved hero. Miloš is a twenty-two-year-old “traffic apprentice” at the train station of his small Czech village during the final year of World War II. Months before, Miloš attempted suicide for a reason that seems like no reason at all: he failed to make love to his sweetheart Masha. “I wilted like a lily,” our guileless, painfully sensitive narrator confesses.

The book tells of his coming of age. The circumstances of the war inevitably collapse upon Miloš’s sexual maturation, and the loss of his virginity becomes entwined with his decision to volunteer as a saboteur in the anti-Nazi resistance. Somehow, with the gentleness and humor of a children’s tale, Hrabal creates a tragic story about the ideal, the myth, and the macabre joke of manhood.

Poor Steffie Cvek has no war effort to ennoble or even ironize her personal suffering. She is a twenty-five-year-old typist living with her toothless aunt. She is shy, awkward, frumpy, credulous, irresolute, kindly, and alone. When we first meet her she is forlornly shelling peas in the afternoon sunlight in her kitchen, like the rejected subject of a Vermeer portrait. “Suddenly,” Ugrešić writes, “she felt a warm mist gather and solidify around her, like cotton wool. She felt she had shelled peas like this before, at the same time of day, in the same kitchen, at the same table. ‘Maybe I’ve been sitting in this kitchen shelling peas my whole life, without noticing it…’”

For there to be a book in any traditional sense, Steffie must become a woman just as Miloš became a man. Something marvelous or terrible (preferably something marvelous and terrible) must happen to her to complete her transformation. Yet from the beginning she is at a loss. What tale is there to be told about someone like Steffie—a woman of unexceptional looks and average intelligence living in uninteresting times? “What if Snow White was ugly?” she thinks. “Maybe there wouldn’t have been a story.”

Ugrešić seems stymied as well, and much of the sublime, sardonic humor in Steffie Cvek in the Jaws of Life comes from the metafictional framework in which the author tries to figure out just what to do with her lonely heroine. She decides to design her “woman’s story” as a seamstress would a garment, and the “prose dress” she produces is accompanied in the margins by sewing instructions. Before each chapter, furthermore, Ugrešić includes homemaking tips from the fashion magazines Steffie reads in her vain search for counsel. “Did you know? Water you’ve cooked spinach in makes a great detergent for black clothes,” she learns.

Well, Steffie turns to friends for help. This is not so different from Miloš, who has role models within the railway traffic office—in particular the moralizing stationmaster Lansky, who salutes when he passes churches, and the lecherous Dispatcher Hubička, who is notorious for seducing the telegrapher and imprinting her bare bottom with mail stamps. Steffie’s girlfriends provide somewhat more conventional examples. Annie suggests she find a boyfriend. Marianna recommends a diet, a makeover, and a few flings, preferably with married men. (“Only they never marry you, and sometimes they can’t get it up because of the motel prices!” she adds by way of warning.) Emancipated Ella, on the other hand, scorns the typical quests for Prince Charming, even though she herself has married five times. “Live, for God’s sake! Work! Read! When did you last read a book?”

Steffie tries to follow their advice. She spends evenings with a few bizarrely ineffectual men Marianna has found for her, none of whom takes the slightest interest in her as a person. At Ella’s goading, she attends the theater, reads Madame Bovary, and goes to an art gallery, trying, with these scraps of culture, to stitch herself into a real woman. Yet nothing can gainsay the sensation that she is unraveling like an unpicked dress or, as she thinks while bathing, dissolving “like an immense piece of soap”—an image that distantly evokes Miloš’s attempt to kill himself by slashing his wrists in a hotel bathtub.

Of course, such a comparison makes Steffie look a little silly. The reason that Ugrešić believed she did not succeed in creating a female Miloš Hrma may have been that much of her story trades tragedy for farce. Miloš behaved foolishly, but he is existentially foolish, nearing and recoiling from a ghastly vision of manhood embodied by the conjoined twins of sex and murder. Steffie’s image of womanhood, in contrast, is made of nothing more profound than ladies’ magazine clichés and vague “happily-ever-after” fairy tales. Her actual life, like Madame Bovary’s, is pitifully empty, without adventure or substance.

Yet for a moment, in the sex scenes that drive Steffie toward suicide, Ugrešić peers into that emptiness and creates a passage of genuinely disturbing power. Again she works from the template in Closely Watched Trains. In that book’s climax, Miloš loses his virginity with a fellow resistance fighter on the night that he will plant a bomb in a Nazi munitions train. In the midst of his ecstasy, bright red flashes light up the horizon like lightning and birds begin to call and flutter in fear. The “distant disaster” is the start of the firebombing of Dresden, the symbol of the death instinct that accompanies Eros.

Naturally, in Ugrešić’s tale there is no such drama. Steffie’s deflowering comes about by accident. She doesn’t know why she consents to it, or even if she has. The first man—he is only called the First—is the neighbor’s son, a local nitwit. The Second is her former chemistry teacher, awkward and embarrassed, who invites her to his apartment for coffee: “Steffie no longer remembered how it had come about, she only remembered her decision to kinda do it with Second, kinda just like that.”

And then Steffie’s transformation occurs:

Second fell asleep with his arms around Steffie and her ear uncomfortably pressed against his watch. In the terrible silence of the night, Steffie listened, hypnotized, to the endless ticking of the watch. And then she heard a bird twitter, then another, and kinda felt that at that very moment—while the watch hammered in her ear and the day’s first bird sang outside, in that pure crystal morning fragment of time—it was then that she became a woman. Independently of First, independently of Second. On her own.

Here is a glimpse at the true terror of womanhood—the ticking of mortality, the indifference of nature, and the recognition of an abiding loneliness that the physical presence of men does nothing to relieve. Whereas Miloš is driven to despair because he fails to perform as a man should, Steffie is horrorstruck because she does precisely what is expected of a woman and finds neither meaning nor comfort in it. Emptiness and irrelevance are not symptoms to be cured; they are the consummation, the apotheosis, of the myth of femininity. That is Steffie’s story, and it is unlivable.

Except not quite. In a 2002 interview for BOMB Magazine, Ugrešić reflected that the character of Steffie Cvek took on a life of her own and somehow defeated all of her creator’s schemes. “In spite of all authorial stitches, in spite of all [Ugrešić’s] attempts to make the device bare, to deconstruct, to make her hero funny, as a hero Steffie Cvek wins. She is stronger, more authentic and alive than all authorial attempts and intentions. She, not the author, conquers the hearts of the readers.”

The quality that makes Steffie so real and vital is her innocence. Just as Miloš Hrma is frankly and charmingly subsumed by his own private cares in the middle of a world war, Steffie has no awareness of the narrative manipulations occurring across her own story. Her naïveté makes her indestructible; Ugrešić is unable to flatten her into a postmodern cipher or sacrifice her on the altar of feminist literary theory.

So she lives on, as much of a conundrum at the close of the book as at the start. Her suicide attempt is too inept to draw much comment (she swallows dozens of pills, but they’re just her aunt’s multivitamins). Ugrešić then seems to relent and has her heroine meet a nice man in an introductory French class, allowing for the possibility of the kind of fairy-tale romance Steffie’s friends and fashion magazines had long promised. But this too Ugrešić leaves incomplete, concluding with a chapter in which the flummoxed author asks her girlfriends how she ought to end the book. “So none of you can think of anything?” she says in despair, after the women suggest only farfetched twists from movie melodramas. “Other than clichés, I mean. Nothing from your own lives? Haven’t you lived?”

It’s not likely that Bohumil Hrabal would have betrayed similar insecurities while writing about Miloš Hrma. The pathos of Closely Watched Trains comes from the juxtaposition of Miloš’s innocence with the inexorable logic of his fate. In this sense, then, it is true that Ugrešić failed to create a “literary sister” of Hrabal’s tragic youth. Steffie is vexingly real, and none of the empty clichés or stereotypes of women’s literature suffice in capturing her or directing her toward a destiny. How should I live? she seems to ask Ugrešić, who in the end can only turn the question to the reader: How does one tell a woman’s story? Somewhere Steffie may still be shelling peas, waiting with equal parts hope and exasperation for an answer.

Sam Sacks is an editor at Open Letters Monthly and writes the Fiction Chronicle for the Wall Street Journal.