Despite political differences, a client finds common ground with his barber in 1990s NBA players and teams.

Trimming my bangs, my barber starts up. “Jordan’s killa. Shaq’s killa. Kobe’s killa.” He stops snipping and makes eye contact with me through the mirror. “LeBron’s not killa,” he concludes, wagging his scissors.

I take a swig of beer and decide not to disagree.

I take a swig of beer and decide not to disagree.

When I get to the barbershop in my Boston-area neighborhood, no one is ever there. All alone, I stand in the middle of the room and revel in the décor. There’s a mini-fridge in the back and above it hangs a chalkboard that reads: “Have Beer While You Wait.” Another wall, above the coat hooks, features a mini basketball hoop, Kevin Garnett jersey, and a framed photo of Jayson Tatum along with miscellaneous Patriots paraphernalia.

I wait five or ten minutes before my barber appears. Usually he’s carrying coffee and snacks from the neighborhood convenience store. Sometimes he emerges through the unmarked door adjacent to the fridge. He chews gum, smells of cologne, and his forehead glistens. When you start talking, he only stops talking for a second.

I’m struck by my barber’s use of the present tense to assess the killa-ness of long-retired players. Is it simply for rhetorical effect or is it indicative of a subconscious yearning to go back in time? For a specific past to return as the present?

My barber is forty-five. I’m thirty-seven. We both hold great nostalgia for the NBA of the ’90s. This is our common ground. Otherwise, our worldviews clash. He believes white privilege is a myth, Trump couldn’t be racist because he has a Jewish daughter, and coronavirus is a media hoax. Our conversations start with the contemporary NBA, wander off into politics, and meander to our comfort zone, where we settle into rattling off ’90s players and teams for whom we long. Hakeem and the Rockets. Ewing and the Knicks. Malone and the Jazz. Reggie and the Pacers. Barkley and the Suns. The list goes on. There were so many great teams, we agree, any discomfort between us evaporating.

During a recent haircut, my barber gets going on how “There aren’t any good big men these days. Anthony Davis is supposed to be the best big man? Yeah right, AD is soft.” He stops cutting my hair and commands me to take out my phone to look up Davis’s career stats. “If he’s not averaging 28 and 15, he’s just flat out soft.” When I tell him Davis’s career stats, 24 and 10, my barber scoffs and shakes his head, then mutters something about how AD would get flat out shut down by the likes of Mutombo, Olajuwon, and Dennis Rodman, before returning to my sideburns.

A week after the All Star break, my barber and I are chatting about the dunk contest. When I mention Harold Minor’s famous windmill dunk, my barber stops cutting my hair. “Baby Jordan,” he says, failing to hold back a smile, his eyes twinkling. For the first time he is silent for more than a second. “Props to you,” he says, just above a whisper, nodding. “I didn’t think you were for real until you dropped Baby Jordan on me.”

Until the Harold Miner moment, I had no idea my barber thought I was such a poser. I assumed we had a tacit understanding that we were two people from different backgrounds with different ideologies, coming together over our shared experience of falling in love with basketball during the ’90s. Did he see me as a superficial fan? Someone who could name the stars only to hold a conversation? Or was I myself soft? A composed college professor, always reluctant to take him up on the beer?

I loved ’90s basketball because it was the era that taught me the game. As a child, I sprang out of bed giddily on Saturday mornings to watch Inside Stuff with Ahmad Rashaad and Hannah Storm. I played hundreds of hours of NBA Live and NBA Jam, collected basketball cards and Starting Lineup figures, and simulated entire games between the Bulls and Knicks, Rockets and Suns, Hornets and Magic, keeping track of all the players’ stats in my head while shooting around in my neighbor’s driveway. For my eleventh birthday, my dad took my friends and me to see Blue Chips, starring Shaq and Penny Hardaway. The ’90s NBA was my childhood.

When my barber finds out I teach at a university, he shakes his head at what he imagines the students to be like. “How much are they paying now? They all deserve A’s, right?” He blames the NBA’s ratings problem on Adam Silver for “letting the players do whatever the fuck they want.” He continues, “If Silver were a CEO he’d be fired by now. Look at the rest of society, MeToo and everything.”

I sip my beer. I consider my barber’s pining for a more physical game, an era where players were told to shut up and play, and a society even more willing than today to let the powerful abuse their power. To my barber, hand-check fouls might as well be microaggressions; player empowerment might as well be socialism; and arguing foul calls might as well be trigger warnings. My barber would like to Make the NBA Great Again.

Because of coronavirus or maybe because I’m trying to avoid certain conversations, I have let my hair grow out into a frizzy mane. Still, I spend a lot of time thinking about my barber. I occasionally spot him strolling down Belmont Street with coffee and a bag of chips. I can only imagine what he thinks of the NBA bubble—the court, the jerseys, the commercials, all focused on social justice. I wonder if he ever thinks about me. He probably has dozens of clients with whom he talks basketball. But if he were to reflect on our conversations, would I be reduced to a cliché—a bleeding-heart liberal—or did I prove myself with Baby Jordan?

I would like to travel back to the ’90s to relive the magic of falling in love with the game while enjoying an easy childhood. I don’t know what the ’90s were like for my barber. I know he grew up poor, and never understood why old guys were always stretching out on the pickup court.

At the end of a haircut where he takes a little too much off the sides, we share a hearty laugh over our realization that we’re now the old guys—our legs no longer springy, our endurance no longer endless, our worship of NBA stars no longer unconditional—and for this reason, who wouldn’t want to go back in time? 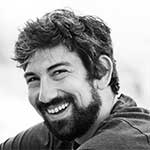 Michael Don is the author of the story collection Partners and Strangers (Carnegie Mellon University Press, 2019). He teaches at George Mason University and co-edits Kikwetu: A Journal of East African Literature.