A History of Me

Winnowing down to essentials during a pandemic, a writer with too much time to think cleans out her closet and immediately regrets letting go of a sweater. We’ve all been there, right? When a sweater isn’t just a sweater and our most rigorous tasks can’t bring the relief we seek.

Within weeks the plague had winnowed our world. We kept in touch with only our closest friends. We wore only our comfiest clothes. Life had been pared down to the essentials.

But I had nervous energy to spare. I couldn’t sleep. I couldn’t eat. And how much CNN could you watch? So one day I decided to clean out my house. What I no longer needed, I’d either trash or give away.

First I tackled the kitchen. I dusted off my cookbook shelves. Then I kept the books splotched and spattered from years of use. Tucked in the back, totally neglected, was a row of virgin reads. Not a spine was cracked or a page sullied. The Portuguese Vegetarian. The Sugar Buster. The Yeast Dilemma. Out they went!

Then I opened the cabinets and assessed my supplies. Three huge serving platters, five chafing dishes, assorted warming trays and crystal candlesticks. Assorted wedding gifts had been hiding in a hutch for over forty years. A set of aperitif glasses. Shrimp forks. Tablecloths of random sizes. I got married when I was nineteen. And, of course, when you’re nineteen your ambition has no limit. The goal was to look like Gidget and cook like the Galloping Gourmet. Out they went.

Five mops of varying degrees of cleanliness. Three buckets and a tractor trailer’s worth of rags. Rusted stools and decades-old silver cleaner. A drawer filled with electrical cords. A Ziploc stuffed with chargers. Out they went.

The biggest challenge was my bedroom closet. Six months into the pandemic, I had lost a lot of weight. Only my bathrobe fit.

One by one, I threw out my baggy jeans. The too-loose blouses. The oversized T-shirts. Then, hands on hips, I appraised my wardrobe one more time. Most people have closets filled with wearable clothes. But mine was more like a Marlene museum, a time capsule dedicated to each decade of my life.

Rummaging through the hangers, it looked as though I had archived the entire twentieth century.

But that was just the beginning. Rummaging through the hangers, it looked as though I had archived the entire twentieth century. Starting in high school, I had documented each fad and phase. Handmade leather belts and tie-dyed shirts from the sixties hung side by side. Brushing my fingers over the sleeves, I was instantly transported. I heard the music. I smelled the weed. I let in the sunshine. Out they went.

From the seventies, I had assembled an Annie Hall collection of tweed jackets and pinstripe vests. By then, I had graduated from college. I had no idea what I wanted to do or who I wanted to be. Instead I accumulated an assortment of work clothes for various dead-end jobs. Out they went.

Everything about the eighties was big. It was the era of Dynasty and Dallas, layers of makeup and hairsprayed hair. My god, the shoulder pads! Each ensemble looked like a football uniform. Out they went.

Everything about the eighties was big.

Then there was my Santa Fe obsession. Every summer, my husband and I escaped the Miami heat and dragged the kids out west. I fell in love with the furniture, the clothes, the jewelry. Turquoise necklaces and mother-of-pearl buttons. Denim jackets and cowboy boots. Out they went.

By the nineties, I started accumulating some nice pieces. By now I had aspirations, a picture of me inside my head. Someone elegant and mature, cultured and refined. Squinting, I held out my arm and read the labels. Dana Buchman. Jones of New York. Ralph Lauren. I wasn’t used to spending a lot of money on clothes. My fingers traveled over the hand beading. I held the soft wools to my cheek. Such extravagance. How I had agonized over these purchases! Each piece had been a push.

One by one, I tried them all on. Then I twirled in the mirror. But nothing was quite as flattering as I remembered. The squared tops barely reached my hips. The waistlines pinched. Either the clothes had shrunk or my body had expanded. Out they went.

By the time I was finished, a dozen Hefty bags were filled. At first I just kept them downstairs in the foyer. One week then another flew by. Finally, after staring at this Stonehenge of discarded stuff, my husband had enough. He raised an eyebrow. I reluctantly nodded back. Then one by one he dragged the bags to the car and dumped them at the thrift shop. Even though I felt lighter, I also felt empty. My poor closet looked like a photo album with half the pages missing. A chunk of my life was gone.

With the house clean and my chore complete, I once again had too much time. Outside, the world was falling apart. Between the pandemic and the presidential election, my capacity for calm was all used up. I had too much time to think, too much time to worry, and too much time to second-guess. That navy wool skirt. That off-white sweater. That pair of boots just a half size too small! What had I been thinking? The heathens had invaded. The church was sacked, the reliquary gone.

Between the pandemic and the presidential election, my capacity for calm was all used up.

Once again I couldn’t eat and couldn’t sleep. Instead I pinged from one room to the next, a human pixel trying to connect. Of course, there was still CNN. Thank god for CNN. Wolf Blitzer. Chris Cuomo. Anderson Cooper. And when all else failed, Christiane Amanpour.

It was the Sunday after our last thrift shop drop-off when I turned on the family room TV. The New York Times crossword was in my lap. A Diet Coke sat by my side. As always, Christiane’s news hour was on the queue.

Christiane Amanpour! The moment I saw her, I could feel my tension melt.

I scrolled to CNN and once again squinted. Then I moved closer to the screen. Something looked awfully familiar. That sweater. Where had I seen that sweater? Was that a Dana Buchman? My Dana Buchman? The Dana Buchman sweater from 1999 that ought to have been sitting in the Goodwill store? From the Dana Buchman collection that was discontinued in 2008?

The camera only focused on Christiane’s upper half. For all intents and purposes, she could be wearing jammies down below. Who cared if the sweater made her hips look chunky? Her hips could be as wide as Nebraska and no one would know. Black with a sprinkling of sequins, it looked perfect. More than perfect. It looked like a little bit of me. And more than anything, I needed to get that little bit of me right back.

I got in my car and adjusted the seat. Since I seldom drove during the pandemic, it took me a while to get my bearings. My SUV behemoth was newish, and I had no idea what half of the gauges and gadgets did. I remembered to put my foot on the brake while I turned on the car. Next I yanked on the seat belt. Was there a rearview camera? Was there a map to point the way? Objects, said the side mirror, are often closer than they appear.

When I was finally done fidgeting, I closed my eyes and took a deep breath. Then I performed a few calculations. Slowly, my pulse began to slow.

The drive to the Goodwill store would take at least twenty minutes. Then I would sit in the car for another twenty minutes while I worked up the nerve to go in. I’d double-mask and put on a pair of sunglasses for good measure. Then I’d push through the door and approach the cashier.

Then I’d stand there. And while I was standing there, I’d think.

I’d think, is the past truly ever past?

I’d think, the future’s uncertain and uncertainty scares me.

And then I’d say, never mind. 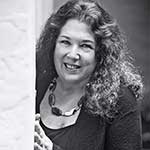 Marlene Olin’s short stories and essays have been published in journals such as the Massachusetts Review, Catapult, PANK, and the Baltimore Review. She is the recipient of both the 2015 Rick Demarinis Fiction Award and the 2018 So to Speak Fiction Prize. Her work has been nominated for the Pushcart Prize, Best of the Net, Best Small Fictions, and for inclusion in Best American Short Stories.