The hour of hooded crows
when cleaners fly for the night
all carrion is eaten
all bones picked and all skins
farewell you unlucky trail explorers!
only a wet spot left now
where a careless black furry mole came to the surface
out of its secret passages,
a failed resident of the garden depths

waves of black wings
on a red background of the dawn
shouts of hook-nosed elders
– they were never here those creatures! we’ve never seen them before!
you make it up
to make us look bad!

mocking them brashly,
the young crows echo them,
– no, of course it wasn’t us!

Translation from the Russian 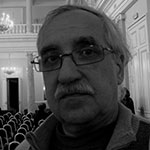 Vladimir (Vlad) Pryakhin was born in 1957 in Tula, Russia. In the 1980s he published The Idealist, a samizdat journal of poetry and prose. Since 1992, his poems and short articles have appeared in literary magazines in Russia as well as in other countries. He is the author of ten books of poetry. In 2012 he became the editor and publisher of The Environment, an international literary almanac. Since 2017, he has been the editor of www.medium.land, a portal dedicated to poetry and art. The winner of several literary awards, he participates in free-verse festivals in Moscow and St. Petersburg. 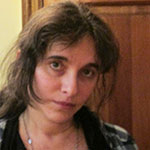 Nina Kossman is a Moscow-born artist, bilingual poet, translator of Russian poetry, sculptor, and playwright. Among her published works are three books of poems in Russian and in English, two collections of short stories, an anthology she edited for Oxford University Press, two volumes of translations of Marina Tsvetaeva’s poems, a novel, and several plays. Her Russian poems and short stories have been published in major Russian literary magazines in and outside of Russia. A recipient of many awards, she lives in New York. She edits East-West Literary Forum, a bilingual journal (in English and Russian).