A day without news. Left behind,
last night’s lead story – a friend’s
untimely death, his son surviving
the head-on two miles from home.
This evening, my near-misses
an embarrassment of luck
inherited like wealth. Three times,
after our father died, my sister
sent half of his years-hidden stash
of bonds, CDs, or even cash
that was never enough for news.
My friend believed the news was
a woman so beautiful he would
never tire of her body.
It was like his love of drinking,
returning daily to that desire,
sometimes seeking my company
for an evening that extended
toward the blackout of any sort
of news. Maybe that need
is a form of loneliness
that catches in the throat
like a concealed confession
for the disquiet of restraint,
a moment when we are, at least,
in understanding’s vicinity.
Outside, three steep miles of trail      i
descend through forest. Apprehensive,
who wouldn’t reminisce for comfort?
At 20:45, April 18, 1930,
the Wagner on the BBC,
as scheduled, was interrupted
for fifteen minutes of news.
Those listening to the radio
were worried, most likely, about
financial affairs, the way the world
was teetering toward another war,
but they heard “There is no news,”
and a piano began to play
as if nothing outside of their lives
had happened, and they could speak
to each other softly as the piano
continued, their living rooms
the extent of what mattered enough
to record and repeat, something
like the somber music after
Kennedy’s assassination, each station
suddenly gone to cathedral organs,
bagpipes, and military bands,
all the instrumental ways
to indicate the news of loss
in the interlude between death
and its details through the static
of a distant station or the hum
that lives between frequencies.
In 1930, in radio’s community,
every listener was intent upon
the first sign of interruption,
importance loitering outside,
even as the Wagner returned,
an aria at 21:00 without
the solace of excuses, one
by one shifting in their chairs
and beginning to whisper
as a woman cried beautifully
in song about unrequited desire. 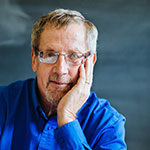