Mother gave birth during an earthquake.
She screamed, Mera bucha – my child.

“Get towels for the seats –
this is a new car. I cannot afford blood,” he said.

On the way, there was no road. Only snowy hills.
What the car paved,
became the new road –
something like what the child would one day do.

And finally, Mother gave birth to an earthquake.
She was born- shaking the rocks beneath the Earth,
covered in rubble, she would need an infinite life to expel.

She came from the warmest womb,
with eyebrows drawn so curious.

Soon after,
The homes around them fell to cement;
to stones; to a solitude that would only know the cry of a child.
Soft, sleepy – eventually suppressed.

In love – anger began to slam the door – phones began to slam
tables. Glass lay shattered,
like a gate to a kaleidoscope of memories from another time.

A year later – The baby lies under a chandelier with fat cheeks
pulsing pink; pink like newly blossomed roses.
A “Happy Birthday” metallic balloon – tied to a mailbox
unties and drifts away.

The Earth begins to
shake again Butche ko dheyko! “Look after the child!”
All together now –
They huddle, a bridge of arms; trembling bodies: keep each other safe.
The beginning of family was the fire in love, on a road nobody knew.
Khaandan aag ke indar buntha hai. “A family is made through fire.”

I cannot go on, eyes closed,
sewn with loose black thread – unraveled
from the night my frock caught on a
thorn tree – Half seeing two countries
that do not see me,
the way I wish to be seen.

On a boat, in the arid air
a child whispers, “The sea hides fish . . .”
A mother who has lost her Maya exclaims,
“Until they swim to the top” –

Strangers ask:
Ghar kaha hain?
“Where is your home”
Like an orphan wandering; Serif mere undar,
“Only inside of me”

You enter here and cover yourself,
with your own skin, and you enter
there, without a veil – they say
“Have you no shame?”

Look back, and then forward –
I remember when my father showed me,
a proper noun – A Country – does not matter for each has its
own terrain. He worked to climb the mountains at night
of both/
of there – of here . . . dependent on
the light of stars and moon/
just to give his daughter a gift –
of a red bike tied with red balloons.

So I too, grew up
wandered into darkness when the sun
chose not to acknowledge me and
my mother’s voice arrested me:
“You must stand on your own two feet.”

I told her if I have legs,
there is no longer any use just standing.
I must run – no, stampede: into blackness,
however far or deep.

She said her country told her:
“Only women who are loose
like the bottom of a frock
come out at night.” I said no,
I learned from father – that I can be
harder than a rock bouncing on cement.

Even in the dark I can be a fish that lurks
right under the water – who moves
so swiftly, no fisherman can catch.

On a boat, in the arid air
a mother whispers “The sea hides fish . . .”
A child who has lost her mother exclaims,
“Until they swim to the top” –

These countries gift you sturdy arms,
tie your eyes with threads as you
carry rocks, walk between
blood and the water (something like your mother’s womb).

You will not tell me, I did not spend a childhood
looking into the windows

that did not see
me. 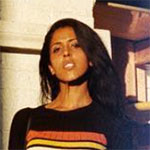 Meetra Javed is a Pakistani American poet, writer, and multidisciplinary artist who also works for a creative agency. She has been accepted to the Yale Writers Conference, Bound Writers Retreat, John Ashbery’s the Home School, and published in several zines. She is currently in the process of editing her first full-length poetry book, Standard Deviation, and is working on her first screenplay.