haunches
as if you’re squatting by a campfire,

though your tailbone’s a comb
for a countess, tines shining
with Ice Age asphalt.

And your elbows!
Oh, Ichabod, here you are again,

sway in the arms of men wearing
breeches & blue stockings:
no one’s bones are showing.

Of our genus, estimated to be between 1.5–2.5 million years old, only one species remains: Homo sapiens (wise man), who emerged roughly 300,000 years ago.

With her instep, Anna scoots dirty towels into the hallway outside
room 22 of the Best Western Tucson Airport Hotel. She
empties wastebaskets, replaces coffee packets, texts her
daughter to say she’ll be late.

Rayna leans over a hotel layout, pointing to breakfast area, pool,
fitness room & laundry. In a lull between arrivals, she
flips off her shoe & rubs between toes where the itch is.

At dusk, coyote pups denned beneath mesquite wake, mewling.
Their mother trots across the wash to the edges of a runway
where she’ll catch mice for pups too young to hunt.

At Our Lady of the Desert, Abraham rakes hackberry branches
that have blown against gravestones, wipes his forehead
with a bandana as creosote staves off waning rays.

Editorial note: From Dear Specimen, forthcoming from Beacon Press on October 5, 2021, with a foreword by Kwame Dawes. Published by arrangement with the publisher. 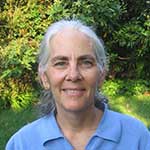 W. J. Herbert’s work was awarded the Anna Davidson Rosenberg Prize and was selected by Natasha Trethewey for inclusion in Best American Poetry 2017. Her poetry, fiction, and reviews appear in Alaska Quarterly Review, The Atlantic, Hudson Review, Southwest Review, and elsewhere. Born in Cleveland, Ohio, she was raised in Southern California where she earned a bachelor’s in studio art and a master’s in flute performance. She lives in Kingston, New York, and Portland, Maine.