Our moms were widows before they met our fathers.
Their hair blue-black, their hands already chapped, caressed
by Inglis die-cast tooling  Bren light machine guns, Mauser
ammunition, or Browning  Hi-Power handguns, torpedo warhead
casings, or reining sorrels’ leather when they made mountains home.
Their first loves shot, stabbed,  or lost in war.

While our fathers picked cotton  for a penny-a-pound,
steeped in dust friction-screamed like cats in winds untamed.
Rode fence to make it through school,  GI Bills or not.
Married our moms from wingman  blind dates,
worked side by side in the hospital in the peak of polio,
then made our broadcloth shifts by hand for school,
dragging thread through eyes, aiming needles  clean, while
our widow moms were current-fried  in hospitals, asylums.

By then, they’d most likely lost three or four kids
before any survived the early years.  Those of us
who did, maybe never  told their names, or told
so often we believed we remembered  them with us
at the table they were never big enough to seat.

Our work permits in hand  at twelve, fields, like oceans,
called us.  Factories, registers, bars, counters, tables, horses –
but always the fields.  You know the deal, back gone. The former field-
worker retraining jump-started some of us  from post-middle
school labor vacancies  to college, by nearly thirty.

For those of us, widowed just like our moms, with no one
like our dads to pick up our after.  Who move through this
like walking rows, straight to the end,  straight for draws
on jugs, water, plain solutions tapped. 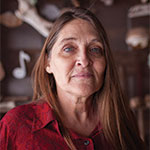 Allison Adelle Hedge Coke’s books include The Year of the Rat; Dog Road Woman; Off-Season City Pipe; Blood Run; Sing: Poetry from the Indigenous Americas; Effigies I & II; Rock, Ghost Willow, Deer; Burn; and Streaming. Awards include an American Book Award, a King-Chavez-Parks Award, an NWCA Lifetime Achievement Award, and a 2016 Library of Congress Witter Bynner Fellowship. She directs the Literary Sandhill CraneFest in Nebraska and is currently Distinguished Professor of Creative Writing at the University of California, Riverside.