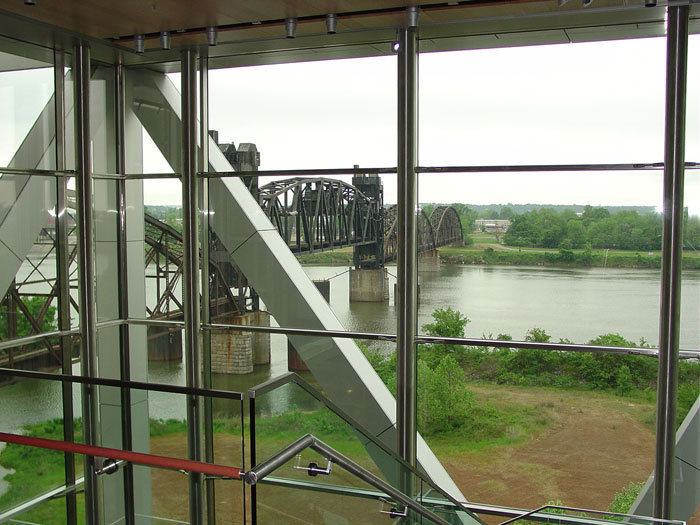 From the Clinton Library, a view of a bridge crossing the Arkansas River.

Every two years a group of outstanding international writers gathers for the International Conference on the Short Story in English (http://www.shortstoryconference.com/). Though cities in Spain, Portugal, and Ireland have served as venues, New Orleans and Iowa City have also hosted the event. This year, writers and scholars gathered in Little Rock, Arkansas, a city whose six bridges illustrate the conference topic—Short Story Traditions: Bridges to Modernity and Beyond.

While my car registered a blistering 106 degrees outside, the conference rooms inside were cool. Writers from Australia, China, Ireland, Taiwan, Sweden, Canada, and the Netherlands, among others, read their work. Cyril Dabydeen and Marion Bloem shared the stage. Later, Sandra Jensen, Tania Hershman, Nuala Ní Chonchúir, Sylvia Petter, and Robert Olen Butler each read a piece of “flash” fiction. Butler opened with the longest of the group (about 900 words). Nuala Ní Chonchúir followed with a 500-word story about Frida Kahlo. Tania Hershman read her 200-word story, “Missy,” from her iPad. Jensen read the shortest of the group at 356 words. Immediately following, the panelists and audience discussed the merits of “flash” as a description of these very short stories. Though the boundaries remain mercifully—thankfully—undefined, several points emerged: flash fiction doesn’t have to be written in a flash; writers of these very short fictions edit, edit, edit to find just the right word; and, in the end, just calling them "fictions" would not only serve the purpose but also avoid definitional relegation.

It was moments like this roundtable discussion that revealed the brilliance of this conference’s organization. Here scholars and writers—or as one panelist described the two groups, birds and ornithologists—coexist without negative tension, and anyone who has an interest can register and attend, mingling freely with the speakers between sessions, purchasing the writers’ books, and having them signed. And though Little Rock didn’t immediately seem to me a likely place for such an international gathering, the reception at the Clinton Library laid any doubts to rest. After both the Mayor of Little Rock and the Mayor of North Little Rock welcomed the guests, President Clinton appeared in a videotaped welcome, concluding, “Leave some good short stories for me.” As the writers toured the Clinton Library, with its third-story view of a bridge crossing the Arkansas River, Little Rock made sense.