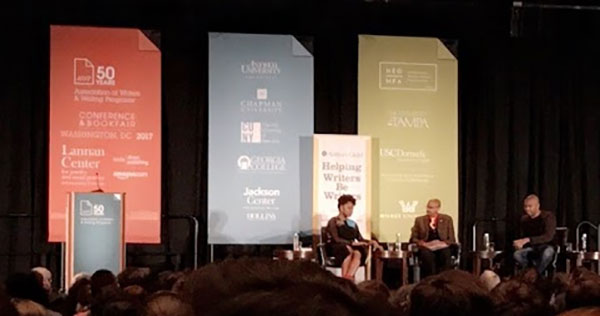 Armed with a printed schedule and a head full of advice, I walked boldly into my first ever AWP. I was honored to attend the 2017 conference, and as a previous World Literature Today intern I couldn’t be more grateful for the support and suggestions of WLT staff. No warning, however, could prepare me for the sheer volume of people, publishers, and ideas condensed into such a space. On a crisp February day in Washington, DC, I found myself enthralled and overwhelmed as I sipped on coffee and considered hundreds of speakers on topics varying from food, poetry, and activism to writing in war zones.

As I sat down to write this I realized how hard it would be to share my experience. How could I explain so many speakers, impromptu conversations, and new ideas? I tried to absorb every detail. I came away with a deeper understanding of the world and about pathways I hope to pursue. I saw a handful of other students, but I was definitely one of the youngest there; the only younger people I saw were children of the seasoned editors, big-name publishers, and established authors. As a friend pointed out: I was a small fish and I had a lot to learn. Upon reflection, three particular speaking events and their takeaways stand out from my tightly packed two days at AWP 2017.

The first, “A Reading and Conversation with Chimamanda Ngozi Adichie and Ta-Neihisi Coates,” was what one AWP coordinator described as the “best attended session ever at AWP.” There was an overflow room that was full in addition to the hundreds of planned seats. This was the session I described to my family, friends, and mentors and was the session I was most eager to see. Coates is an American author and national correspondent for The Atlantic, and I had just finished his National Book Award winner, a letter to his fifteen-year-old son, Between the World and Me. Adichie is a Nigerian novelist and speaker, and I had just finished her published essay We Should All Be Feminists.

I hurriedly walked (half an hour early) to the doors and saw a crowd already formed. Admittedly, my eyes grew wide. I thought I was being smart, but apparently sixty others had the same bright idea. Nonetheless, I was able to find a chair and sat poised to write down the words of giants.

Coates and Adichie spoke of black identity, mental health, their children, and scars from the exploitation in their ancestors’ pasts. While no one would deny the gravity of these topics, they both were much funnier than I thought they would be. They read from their works, and Adichie naturally wove comedy into her writing. Coates, on the other hand, has cutting, serious prose but is hilarious in person and not afraid to crack a joke or two at others’ expense. Coates read from an upcoming book but did not mention the name, so I am left only with one phrase jotted in my notes, “I can only carry so many and them I can only carry so far.”

This strikes me as a decision I will need to make: What will I choose to do (or carry) in my life?

Without revealing Coates’s book or characters, I can simply say this phrase is about a choice, a heart-wrenching choice one of his characters must make. In a way, it is about a choice we must all make because we can only give so much of our time, energy, and heart to others. I am graduating soon, so this phrase strikes me as a decision I will need to make: What will I choose to do (or carry) in my life?

The second, “I Wouldn’t Go There if I Were You: Literary Journalism and the Craft of Writing Dangerous Places,” was a jaw-dropping account of four authors who had researched and interviewed at the frontline of ISIS attacks, within Syrian warzones, and had seen brutality on Indian streets firsthand. This opened my eyes to just how far one could chase curiosity. I’ve always heard the phrase, “You don’t know what you don’t know until you know it.” I really had no idea what lengths, and what trauma, went into getting accurate information to a larger audience.

The emotional and contextual depth of these authors’ reportage was astounding, and they offered two important suggestions to authors everywhere: contextualize your work by separating individual experience from larger themes within a culture, and do not “make myths” by going into a situation with a preconceived storyline or answer. In an interesting thought experiment, one of the panelists had the audience imagine how they would answer oft-asked political questions journalists (lacking context) pepper on civilians in war zones. “What if the questions instead focused on the US election? How would you answer this if the questioner had no knowledge of US culture, history, and geography? Would it be a simple answer, then?”

The third, “Writing Across Cultures; Immigrant Writers in Search of Home,” struck me as particularly relevant after the launch of Latin American Literature Today. In fact, one of the panelists, Valeria Luiselli (Los niños perdidos), is on the LALT editorial board. Through personal accounts of their lives at home, immigrating, and adjusting, these authors spoke about how they bridged two countries while belonging to both and neither at the same time. Because they are immigrants, they described how they have access to private spaces outsiders could never hope to enter. On current political tension and antagonism toward immigrants, they all stated their work was about “making immigrants into human beings” and explained that a shared vulnerability is what makes us all human. This panel stood out to me, personally, because I have many immigrant friends, a growing interest in works in translation, and a minor in Spanish. I particularly enjoyed the panelists’ comedic yet deeply insightful advice on finding a home: “Become a turtle and carry your home on your back.”

One thing I was not expecting was something deeper and wordless that permeated my impromptu discussions with AWP-goers outside the conference venue.

I walked into AWP boldly with few expectations, because I knew I was a small fish in a very large pond. My two days in DC made me reflect on realities different from my own, considering scars of exploited ancestors’ pasts, wounds in war zones at present, and the in-between space of being an immigrant with an uncertain future. One thing I was not expecting was something deeper and wordless that permeated my impromptu discussions with AWP-goers outside the conference venue, on the Metro, and in nearby restaurants; there was a sense of openness to discussing topics that fall through the cracks and a sense of fellowship.

As I stood in front of the White House, looking over the grounds in my last hours in DC, I realized my world is in flux. On a personal level, I am preparing to graduate. On a national and global level, politicians are changing policies daily. Through the sense of fellowship and shared vulnerability I felt at AWP, however, I believe we can weather the changing tides and rise stronger than ever.

Lucy Mahaffey (http://lucymahaffey.com), a former WLT intern, is a senior at the University of Oklahoma. She co-founded FORUM, a newsmagazine for the OU community on in-depth, monthly topics such as “Disrupting Racism at OU.” She is majoring in international studies and was a speaker at TEDxOU.