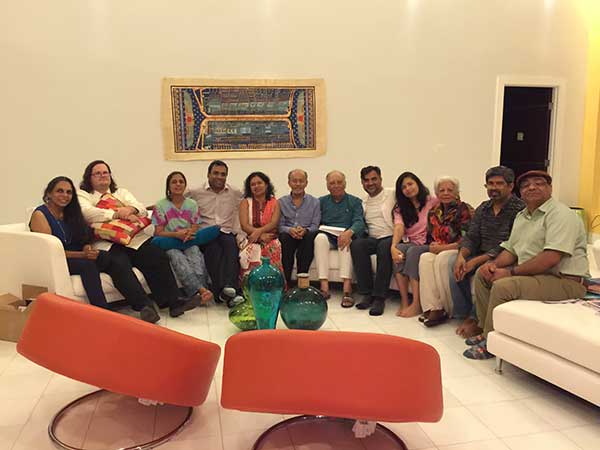 I have just returned from an extraordinary journey into the Republic of Poetry. The occasion was the first South Asian Diaspora Poetry Festival held in Austin, Texas, on August 1–2, 2015.

I was one of the core group members along with poets Usha Akella and Pramila Venkateswaran, who planned the event. Our original intent was simply to meet in Austin to brainstorm the formation of a poets’ collective that would draw attention to and promote the work of South Asian American writers, perhaps establish a modest publishing venture, and generally increase awareness of South Asian poetry in the American literary landscape. We would also do a couple of bookstore readings and interact with local poets and audiences.

What happened along the way swept us off our feet. Usha, who lives in Austin, runs the Poetry Caravan and has a strong presence in the local community. She was offered a generous grant from Austin Poets International (API), an invitation to read and some financial support from Austin Community College (ACC), and a reading venue and dinner invitation from the Dialog Institute run by the local Turkish community. Grabbing this opportunity impelled Usha into a frenzy of activity, which ballooned into a two-day festival that brought together poets from Vancouver, New York, Trinidad, New Delhi, and Houston as well as a handful of local poets. Keki Daruwalla, the eminent Indian poet who happened to be in the US, agreed to attend and to inaugurate the festival.

As poets, we are, of course, drunk on words and language.

In the early part of the planning process, Dr. Amritjit Singh, who was finishing his year’s Fulbright stint in New Delhi, helped come up with the name Matwaala, which evokes a spirit of nonconformity, bonhomie, and fun. Although Matwaala has traditionally referred to someone who is intoxicated, the word is used more often in a transferred sense for someone who is a free spirit. As poets, we are, of course, drunk on words and language.

If further proof was needed for the power of poetry to unite diverse groups of people, this celebration provided abundant evidence of it. Add to this music, song, and dance, and the result is a high-potency cocktail. Usha invited a local band led by Julie Slim, a Lebanese American vocalist who sang in English, French, and Arabic. Ten dancers from the Natyalaya School of Dance presented a spectacular fusion version of Bharat Natyam, and a violin virtuoso, twelve-year-old Kai Cole, gave a solo recital. There was also a photo exhibit at the venue by Rama Tiru. This magical mix of poetry, music, food, laughter, and fellowship was something I had never witnessed before with such an intensity. The last time I had been part of similar festivities on an even greater scale was in the late 1980s at Bharat Bhavan, Bhopal, when I attended a World Poetry Festival and later coordinated an Asian Poetry Festival that lasted several days, where the air was saturated with poetry and an instant camaraderie was established among the poetry fraternity.

At academic conferences, the atmosphere is competitive, corrosive even, and the air is thick with jargon. In Austin, the spirit was genial, welcoming, respectful. The poets listened to each other’s recitals with rapt attention and showed their appreciation in an unreserved fashion leading to a genuine kinship among like-minded folk. Conversations between sessions further cemented the bond among everyone—poets and listeners. Usha’s lovely house, and her even bigger heart, provided the ideal setting for this closeness to develop.

Among the poets who participated besides those already mentioned were Phinder Dulai, Ravi Shankar, Sasha Parmasad, and Anis Shivani, who is also a novelist and a brilliant, outspoken critic who is not afraid of knocking down the sacred idols of contemporary American poetry. Other local poets who took part were Shubh Bala Scheisser, Archana Vemulapalli, Mamta Misra, Debangana Banerjee, and Spirit Thom.

The readings were interspersed with short paper presentations. True to his reputation, Anis titled his paper “Why I Don’t Think of Myself as an Immigrant or Diaspora Poet.” By the end of the revelry, he was ready to switch sides and join the club! I was asked to speak about “The ’60s Poetry Scene, or What I Learnt in Poetry Nursery.” It is to be expected that American readers would be unfamiliar with the origins of Indian Poetry in English. But even in India among the generations of poets that followed in the ’80s, ’90s, and later, there is a lack of awareness of the groundbreaking contributions made by foundational figures such as Nissim Ezekiel, Dom Moraes, A. K. Ramanujan, Arun Kolatkar, and Kamala Das. Pramila’s paper offered statistical evidence of the lack of representation of work by women of color in literary journals in the US.

Two books were released at the festival: one was Usha Akella’s collection of poems and short prose pieces, The Rosary of Latitudes ( Transcendent Zero Press, 2015), and the other was Pramila Venkateswaran’s Thirteen Days to Let Go (Aldrich Press, 2015).

The audience was not the only entity learning about poetry. Even among ourselves, there were discoveries to be made, backstories to be unveiled. I have known Keki close to fifty years, and I did not know he was born in Lahore, spoke fluent Punjabi, and having lived in Delhi, was at ease in Hindi and Urdu. At one after-dinner session, he was reciting segments of Faiz and Ghalib’s ghazals in chaste Urdu. To everyone’s delight and amazement, Sasha sang a moving song composed by her father, Kenneth Vidia Parmasad, a well-known literary figure in his adopted homeland, Trinidad, which spoke eloquently about the lives of “Children of Indenture” whose parents had migrated from India in the early years of the twentieth century.

In the end, the sweet sorrow of parting brought tears to many eyes, and having to return from this magical space to our civilian lives seemed like a pale and drab prospect.

But there was no stopping the flow of energy and enthusiasm generated during the event. Post-festival fever and conversations continued unabated online. As I write this five days after the event, plans for the second annual Matwaala South Asian Diaspora Festival are already underway. Stay tuned for updates.