Stranger Than Nonfiction—A Look at the Online Homework Racket 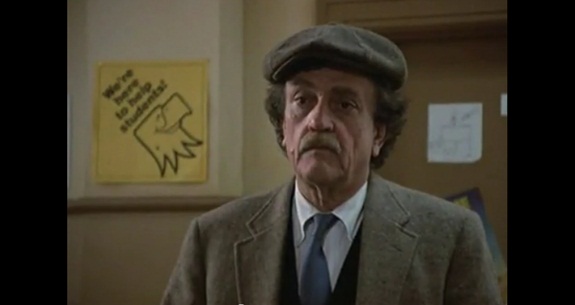 Kurt Vonnegut, Jr. played himself in the movie Back to School, where he comically helps the wealthy Thornton Melon (played by Rodney Dangerfield) in a homework scheme that backfires.

“Dear Mr. Lam. I loved your essay, ‘The Palmist,’ but I can’t figure out what the main theme is. Is it dying and being all alone? My teacher suggests I read more of your writing. . . . I’m glad I found you online. . . . Thank you very much for your help.”

The email from, let’s call him “Evan,” is not atypical. Students assigned my work sometimes reach out to me for help. “The Palmist,” however, is not an essay but a short story in my new collection, Birds of Paradise Lost. Its claim to fame is that it was read on PRI’s Selected Shorts a few years ago by not just one but two well-known actors: David Strathairn, who played journalist Edward R. Murrow in Good Night and Good Luck, and later by James Naughton of Gossip Girl.

But never mind all that; for Evan it is immaterial. What’s more important is to have the answer, the main theme, since his paper is due. And who better than from the author himself?

While it flatters me to know that some of my work is being taught in high schools and colleges, and that I have done my share in confounding the mind of students near and far, it never fails to astound me what some of these young people would do to avoid thinking.

A classic email I got some years ago was from a young woman named Dao. Her message came with the word “HELP” in caps in the subject line. “Dear Mr. Lam,” it says. “My name is Dao and I am having difficulties with my essay in my English class. I am reading one of your short stories for class assignment called ‘Grandma’s Tales.’ It is a really good story but I can’t seem to find the REAL theme of the story. Can you please help me?”

“Grandma’s Tales,” too, is collected in Birds of Paradise Lost. But to be perfectly honest, I didn’t have a theme in mind when I wrote that tongue-in-cheek story about a Vietnamese grandmother who dies, comes back to life, and goes to a party with her grandson. I once suggested a possible theme to another student, but his teacher apparently didn’t like the answer: she told him he had best find a more serious theme and rewrite his paper if he wanted to receive a better grade.

The whole situation reminded me of Rodney Dangerfield as wealthy Thornton Melon, who went to the source with style in Back to School. Mr. Melon, deciding to go back to school in his fifties, hires the great Kurt Vonnegut, Jr. (who played himself in the movie) to write a paper about his own books, but the scheme backfires. Melon’s English professor, Dr. Diane Turner, is disappointed with the result. “Whoever wrote it didn’t know the first thing about Kurt Vonnegut,” she tells him curtly, no pun intended. But at least Vonnegut got paid.

Still, going to the source is admittedly rare. Students don’t usually email writers to help with their homework. No, increasingly, it seems they go online to look for other people’s homework instead.

“NEED HELP ASAP ENG/125,” is a post by a student on Student of Fortune on July 30, 2012. “Has anyone read the nonfiction stories?” the student asked. The “nonfiction stories,” also known as essays, are “Who Will Light Incense when Mother’s Gone?” by Andrew Lam (yours truly), “Salvation” by Langston Hughes, Gretel Ehrlich’s “About Men,” and Joan Didion’s “On Going Home.”

While it is flattering as hell to even be mentioned in the same sentence as these great writers, let alone have my work compared and contrasted with theirs, it is distressing to know that students are offering $1 to $10 for someone else’s work, presumably to avoid thinking.

The assignment? “Select two of these four writers and write a 1,400–1,700-word paper that would answer some of these questions: ‘What makes each of the selections nonfiction?’ and ‘How is imagination required for writing and reading nonfiction? Why or why not?’”

What the purchasing student would do with the $10 tutorial after it is paid is up to him, of course, but I suspect most likely he’d be busy rearranging sentences and punctuation in hope of escaping software programs that catch plagiarism. But it seems the only imagination required here is not the literary kind, and the bulk of critical thinking is used for anything but literature. It is spent in good part on methods that garner good grades—be it finding and emailing the authors or buying old homework online or asking wiki.answer.com—without having to think about the work itself.

And if the student is still dissatisfied with Students of Fortune’s offerings? There’s always Studymode, which advertises to inspire “better grades”—a kind of Ebay for old homework assignments, I suppose. On Studymode, you can “supplement your classroom learning and boost your grades with help from our powerful site features.” After all, it’s where—egad!—“six million students reference us every month!!!”

Studymode offers some old homework that compares Langston Hughes’s “Salvation” and my essay, “Who Will Light Incense when Mother’s Gone?” But since I didn’t pay, I only got a partial glimpse of some of them, and though not greatly instructed, I remain oddly jealous. Had I gotten half of the help the new generations are accessing, I would have flown through my English courses, instead of failing them at Berkeley, and—to my shame—having to take Subject A, a remedial course that remains a sore point surely for any published author.

In my defense, however, I did think for myself; I just wrote badly, due to the fact that English is my third language and I was still wearing donated jackets from Camp Pendleton, the Vietnamese refugees processing center in Southern California where my humble American life began. (On the other hand, I wonder if I would’ve even cared to think at all if I had access to a treasure trove of mediocre writing and ready- made homework online at the click of a mouse?)

But I digress. Let’s get back to the “main theme” here, which seems to be the trouble for everyone involved.

There is something endearingly naïve about students’ search for easy answers in literature, and how some approach literature as they would math problems. What Evan wanted is a clear-cut answer. He wanted to know “The Palmist’s” main theme, and assumed that I had it, and were I to hand it over, he would instantly get that much-coveted "A."

On wiki.answer, too, someone I assume to be a student asked, “Can you answer this question? What is the definition of Andrew Lam’s ‘Who Will Light Incense when Mother’s Gone?’”

Alas, the problem with serious literature is that “the definition” or the “real theme” are never obvious, if they exist at all. If a story is any good, be it fiction or nonfiction, it leaves a deep impression from which the reader reflects and discerns experiential meanings. The reader’s sensibilities play a strong role in coming up with a theme or two, if he or she were to think critically at all about the work. And, surely, it involves the reader’s own imagination.

But why use imagination or critical thinking at all when you can use a credit card? According to paperdue.com, there’s a clear answer to “Who Will Light Incense when Mother’s Gone?” It is “an attempt to reflect on the cultural changes which take place in people’s lives when they immigrate to the United States . . . ,” it offers. “This question is not only about one particular cultural ritual, but is actually a discussion about how people’s lives, and their cultural beliefs change when they immigrate to America.”

It actually sounds good enough, but what do I know? I am just the author. And there’s more but, alas, you’ll have to sign up to be a member before you can read the rest.

So—“Dear Evan: It may not occur to you that there might be more than one theme to any story, and that, more often than not, there are no wrong answers in literature, only well-argued propositions. May I suggest that, as I suggested to others who came before you asking for ‘main’ or ‘real’ themes, you go sit under a tree and read ‘The Palmist’ aloud to a few friends who can listen well? They’ll probably have a better answer than I do. And once you figure out what that theme is, do put it up in paperdue.com or some such websites. And when I can afford membership, I’ll be sure to log in and read it.”