The William Stafford Centennial 2014: 100 Years of Poetry and Peace 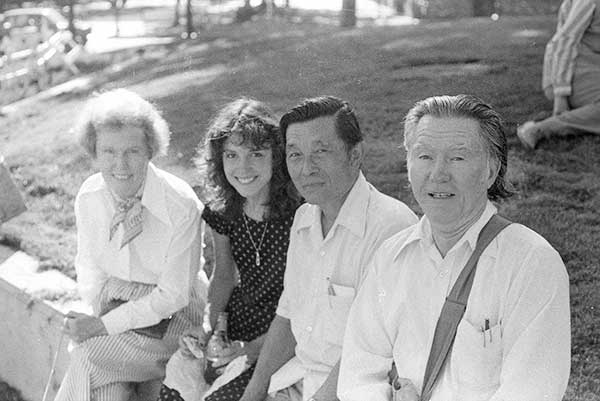 Every year on August 6, the world marks Hiroshima Day to commemorate the day in 1945 when an American B-29 bomber dropped the first atomic bomb on the Japanese city of Hiroshima. William Stafford’s poem “These Mornings” reminds us of the terrible scars of that day sixty-nine years ago.

“These Mornings” was written by William Stafford (1914–1993) while he was interned as a conscientious objector during World War II. In the poem, he imagines the effects of bombing by both Allied and Axis powers, such as the Nazi Blitz of London and the Allied bombing of Hamburg, known as “Operation Gomorrah,” during which a firestorm killed over forty thousand German civilians. The habit of feeling compassion for one’s country’s “enemies” was lifelong for William Stafford. Each August 6, on Hiroshima Day, he and his friend Hideo Hashimoto would take part in “The Shadow Project” in Portland, Oregon: lying down on the sidewalk at city center to chalk their body shapes in memory of Japanese citizens incinerated by the United States’ first atomic bomb.

Each August 6, on Hiroshima Day, Stafford and his friend Hideo Hashimoto would take part in “The Shadow Project” in Portland, Oregon: lying down on the sidewalk at city center to chalk their body shapes in memory of Japanese citizens incinerated by the United States’ first atomic bomb.

William Stafford published over eighty books of poetry and prose, including Traveling through the Dark, which won the National Book Award in 1963. He taught and traveled the world as a witness for language as the fundamental human alternative to violence, visiting Iran under the Shah, Egypt, Pakistan, India, and Nepal. He would sometimes give thirty poetry readings in thirty days and was a beloved teacher, known for his famous dictum, “If you are writing and you get stuck, lower your standards and keep going.” His students soon realized, however, that such persistence and verve were actually a very high standard for creative life. Stafford wrote every day before dawn, and composed over twenty thousand poems, some feeble, and others essential:

Watch our smoke curdle up out of the chimney
into the canyon channel of air.
The wind shakes it free over the trees
and hurries it into nothing.

The cities today are going away into the sky,
and what is left is going into the earth.

Kim Stafford is the founding director of the Northwest Writing Institute at Lewis & Clark College and author of a dozen books of poetry and prose, most recently 100 Tricks Every Boy Can Do: How My Brother Disappeared (Trinity University Press). He serves as the literary executor for the Estate of William Stafford.