by
Han Shaogong
translated by
Ning Yu and Jonathan Stalling 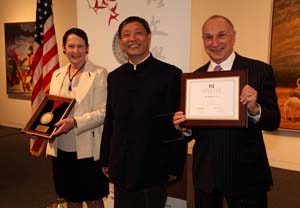 When he visited the University of Oklahoma in February 2011 to receive the Newman Prize for Chinese Literature, Han Shaogong delivered the following remarks upon acceptance of the prize.

Han Shaogong is pictured here with Harold and Ruth Newman.

It is a great honor for me to be here receiving encouragement from the jurors on the selection committee and accepting the second Newman Prize for Chinese Literature. I certainly know that there are many other writers who are just as qualified as I am for this exceptional honor. The fact that this prize has fallen on me, unexpectedly, should not be seen as affirming my personal achievements, but as representing the attention to, and the support of, Chinese literature in general from the sponsor and organizer of this prize, as well as from reader friends all over the world.

Thank you all very much!

I regret that I can only express my gratitude in Chinese, although I wish I could someday express myself and make friends freely in other languages, such as French, Japanese, Russian, Spanish, Arabic, and so on. This is of course an impossible task for me to achieve. There are more than five thousand languages in this world; any language genius is doomed to feel frustrated when confronted with such a formidable number.

As a matter of fact, none of us can even acquire a full command of our mother tongue. It is said that English has nearly 500,000 lexical items, which are also increasing by a few thousand new words each year. The Kangxi Dictionary of the Chinese language contains 47,000 Chinese characters, which can be combined into countless words of infinite variety. Even if we study at a college for the duration of our lives, or even for the duration of our lives multiplied by three, we can still only learn a very small portion of our mother tongue.

More importantly, in this complicated and enriched living practice of mankind, every language is public and nonpublic at the same time, so that many daily words produce a great deal of ambiguity in specific contexts. A child and an adult cannot have the same understanding of the word marry, as they lack common life experience. Similarly, is it possible for people living in both the frigid and tropical zones to have the same understanding of the word sun? Or is it possible for people who live in one place all the time and people who move around quite frequently to access the same connotation of the word hometown? The reality of current globalization is such that the rich are making enormous fortunes across national boundaries, whereas the poor are working hard to make a living within national boundaries. While the rich in the world are rich almost in the same way, the poor of the world are all poor in different ways. So then, what are those life stories beneath the so-called "globalization"? Can we arrive at a unified definition for all the plurality and variety of "globalizations" with the help of a dictionary?

Over a decade ago, it was in a small village in southern China that I became puzzled by questions like this, thus obtaining the initial driving force for writing A Dictionary of Ma-qiao. "Maqiao" literally means "horse-bridge" in Chinese, and is the name of the village in the novel. Language is a door to life. The "Maqiao" behind this door is of indefinite depth. We need to carefully approach this subject. Today, millions of "Maqiaos," which comprise the Story of China, pose these issues, resulting in endless controversy. All the existing theories appear to be inadequate to describe this gigantic but nameless reality, or to diagnose the inconceivably distressing predicament and abounding vitality of linguistic indeterminacy. Under such circumstances, should we try to deny this reality, or should we be more mindful of the limitations of our language and its various products?

This small book of mine, a prizewinner, is of course not a real "dictionary," although many clerks in bookstores have mistakenly placed it in the reference books section, and have even thought that "Horse-Bridge" is a name brand that is an intentional parallel to and rival of "Ox-Ford." This book is but a fiction and, for that matter, does not promise any eternal and universal interpretation of any authoritative nature. Nor is it intended to be a fake theoretical book, history book, or reference book. As much as other literary works, its protection of the scenes, details, variations, individuality, uniqueness, and vagueness in life is perhaps only to reiterate the right to be skeptical, and to open readers' narrow views to facts and truths to the fullest extent possible.

In this sense, literature always has a suspicious face. In other words, literature always re-creates public life in a nonpublic way, leading to new integration through new disintegration, and pointing to new clarity with new perplexity. This process will, perhaps, never come to an end. That is also one of the reasons why when we hear time and time again the prediction that literature will perish, we don't need to worry too much about that.

Translation from the Chinese
By Ning Yu & Jonathan Stalling

Han Shaogong (b. 1953) is one of contemporary China's most critically acclaimed novelists, celebrated for his linguistically sophisticated and inventive novels and essays of modern China. More biographical information is included in Julia Lovell's essay (page 25 of the print or digital edition of WLT).