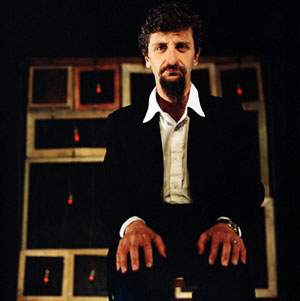 I have a technique.
When I attend a meeting,
I sit down, I pull out my handgun, and I lay it on the table.

It’s just a technique,
a way I have of living in peace with my fellow man.
But I have to follow certain rules.

The first rule is “pull out your handgun immediately.”
I pull it out the minute I arrive.
I wouldn’t want anyone to think
that I’m pulling it out because of a turn in the conversation.

The second rule is “never look at the handgun.”
This is a fundamental rule.
Otherwise someone might think
that I’m trying to back up my point of view
by means of intimidation.
Nudging your gaze toward the handgun with my eyes,
as if to say, “Look out or I’ll shoot!”
The handgun should never be the topic of discussion.

But it’s not a generic sort of thinking,
a personal memory,
a blurred image.
It’s a very specific thought.
It never varies.

I think of the cylindrical chambers that house the cartridges,
the pressure on the trigger that cocks the hammer
and at the same time makes the barrel spin,
revolving clockwise.
I think about the hammer that, once it reaches the apex
(cocked back as far as it will go),
snaps down onto the firing pin of the cartridge
and fires the shot.

I have a technique.
When I attend a meeting,
I sit down, I pull out my handgun, and I lay it on the table.

Of course someone might think that,
despite these rules of mine,
the attention focused on me
is purely a result of the handgun I ostentatiously display,
that the people I meet and see are influenced by the handgun.

So to eliminate any doubt
I’ve started carrying it in my pocket.
Some people know about the gun,
but as time passes I meet new people
who know nothing about the presence of the handgun.

The technique works all the same.
Of course, I have to change the first rule,
meaning I can no longer pull out the handgun
as soon as I sit down.

But the first rule hasn’t been abolished entirely.
Very simply, I limit myself to thinking about the handgun
I have in my pocket.

So I could say that
I have a new technique.
When I attend a meeting,
I sit down and I think about my handgun.

The possibility of keeping the handgun in my pocket,
without necessarily pulling it out,
has been revolutionary for me.
Now the beneficial effects of the handgun
can be experienced anywhere
and not just in meetings.

Without ever looking at my handgun,
without talking about it and without displaying it,
I can think about it constantly.

Even when I meet my neighbor, the retired colonel, on the stairs,
or when I go into a café to have an espresso,
or when I talk with my wife.

I encounter humanity at large,
I look humanity in the face,
and I think about my handgun
and a kind of magic occurs,
a transformation of my perception of the world.

All the human beings around me
are suddenly changed into targets.
It’s not like I really shoot them, I’m not a violent guy.
But the fact that I could do it reveals them to me as silhouettes.
Motionless silhouettes, or silhouettes in motion,
talking silhouettes, but silhouettes just the same.
Each one of them with its bull’s-eye
stamped on the forehead or around the heart.

I run into the retired colonel
stepping out of the elevator with his grocery bags,
“There’s a discount for retirees at the supermarket
every Wednesday until noon,”
he tells me, showing me the garbage that he buys.
I help him to carry his groceries as far as his armored burglar-proof front door.
Then I think of the handgun in my pocket,
I look at the bull’s-eye,
I smile and tell him to have a nice day.

I go downstairs to have an espresso,
the barista standing with his hands in the sinkful of water
and a dark-brown stain on his white shirt
asks, “What would you like?”
I think of the handgun in my pocket,
I look at the bull’s-eye,
I smile and say, “A ristretto shot, thank you.”

My wife tells me about the birch bark extract
she uses to fight the stretch marks on her buttocks.
I think about the handgun I’m carrying in my pocket,
I look at the bull’s-eye,
I smile and massage her ass.

The fact that I don’t draw my handgun and shoot at the bull’s-eye
is just a choice that I make,
but the possibility of doing so is an immense source of relief.

The luxury of having a choice!
The choice of shooting the retired colonel
seeing the jets of blood all over his half-price garbage,
blowing the barista’s head off,
firing into my wife’s sagging ass,
her ass smeared with birch bark extract.

I have a technique.
I always keep the handgun in my pocket.
I don’t talk about it, I don’t display it,
but I think about it constantly.

One time I tried an experiment.
I intentionally left the handgun in the drawer of my nightstand
and I left the apartment.

On the stairs I ran into the retired colonel.
He was huffing and puffing, shopping bags bulging with garbage.
“The elevator’s out of order,” he said, “of all days on Wednesday,
when I do my heavy shopping for the week.”
He was sweating.
The sweat was pouring down his fat face,
his shirt was covered with dark patches of sweat.
Two big patches under each armpit and one on his belly.
“The elevator’s out of order!” he was saying,
while I looked for the bull’s-eye without finding it.
Without a handgun you have no choice,
you have to stop and chat.

I hurried down to the café,
thinking, “I’ll have an espresso and the anxiety will pass.”
The barista was standing with his hands in the sinkful of dirty dishwater.
When he saw me walk in
he dried his hands on his food-encrusted apron
and asked me, “What would you like?”
“An espresso . . .” I answered as if it
had really been a question.
He yanked open the dishwasher
and pulled out a bunch of steaming espresso cups.
He stacked them on top of the espresso machine,
he made it puff out a cloud of steam
and with his hand still wet he served me my espresso.
Without a handgun there is no choice,
you have to have that espresso.

I hurried home.
My wife opened the door with wet hair,
the towel on her shoulders and the hair color in her hand.
“Can you see the roots?”
she asked showing me her gray hair.
And I looked for the bull’s-eye on her half-dyed head,
but all I saw was her hair, still smeared with conditioner.
Without a handgun there is no choice,
you have to look at the roots.

So I hurried into the bedroom
and got my handgun out of the drawer
I gripped it tightly in my hand, feeling the cold steel,
the heft of the weapon.
Then I slipped it into my pocket.

My wife caught up with me.
Her hair dripping suds onto her ears
and asked, “What’s wrong?”

I looked at her as I thought
of the cylindrical chambers that house the cartridges,
the pressure on the trigger that cocks the hammer
and at the same time makes the barrel spin,
revolving clockwise.
I thought about the hammer that, once it reaches the apex
(cocked back as far as it will go),
snaps down onto the firing pin of the cartridge
and fires the shot.

I told her, “Nothing sweetheart, I’m better now,”
and on her forehead the bull’s-eye reappears,
the colorful circles with a tiny dot in the center.

I see you on television,
I read you in the newspapers and magazines:
politicians, bankers, chairmen of the board.
I know exactly what you’re thinking.

Whatever you talk about, from justice to immigration,
from the economy to the constitution,
you’re always thinking about the same thing:
the handgun you have in your pocket.

That’s the reason
that you see us all as so many silhouettes.
That’s why whatever you say, it’s talk with a deadly weapon.

Translation from the Italian
By Antony Shugaar

A student of literature and anthropology, Italian actor, director, and author Ascanio Celestini (b. 1972) is keenly interested in the commedia dell’arte and runs a number of workshops. Since his first play Cicoria (1998), centered on Pasolini, he has performed numerous monologues based on testimonies and encounters. His film La pecora nera (2010) was an official selection at the 67th Venice International Film Festival, and his latest story collection is titled Io cammino in fila indiana (Einaudi, 2011).

Antony Shugaar is a prolific translator, with new novels by Silvia Avallone, Gianrico Carofiglio, Diego De Silva, Giorgio Faletti, Gianni Rodari, and Paolo Sorrentino forthcoming in 2011. The recipient of a 2007 NEA translation fellowship, he is also the author of I Lie for a Living and Coast to Coast, and the coauthor of Latitude Zero: Tales of the Equator. His essay “Darkness at the Heart of Recent Italian Literature” appears in the July 2011 issue of WLT.