The Extraordinary Adventures of Adele Blanc-Sec. Vol. 1 by Jacques Tardi 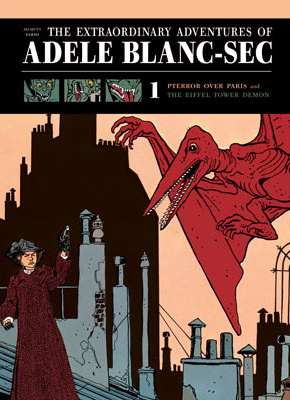 Caught somewhere on the structural continuum between the comic book and the graphic novel, the graphic album was the staple of the French bande dessinée (BD) industry for decades until L'Association and other "alternative" BD publishers forged an audience for longer books in the early 1990s. The album is traditionally a forty-eight-page hardcover volume and features higher production values and larger page sizes than its American cousins. The result is a form than can easily bear the weight of higher panel counts per page and more text. There has always been some resistance to the form in the United States due to the high ratio of pennies to pages in comparison to domestic comic books featuring much lower production values.

Though many creators worked and continue to work in the album form, few mastered it so gracefully and to such entertaining effect as Jacques Tardi. This recent release from Fantagraphics, entitled The Extraordinary Adventures of Adele Blanc-Sec, collects the first two of Tardi's Adele adventures into something that could easily be mistaken for a graphic novel. In this popular storyline, Tardi explores fin-de-siècle Paris with a mixture of gothic imagery and ludicrous plot twists, propelled by a droll heroine with a penchant for entangling her elaborate schemes with the ineptitude of buffoons.

First published in the 1970s, Tardi's work here is truly timeless, rendering his characters in Herge's ligne claire style but embedding the background with a virtuoso's attention to detail. This is important because the story draws so heavily upon the setting—Paris in the late nineteenth century—to give it a depth that allows the work to transcend its often ridiculous plot devices. In the first story, "Pterror Over Paris," Adele's quest to recover stolen goods (for her own gain) becomes bound up in the unlikely appearance of a pterodactyl that begins assaulting the citizens of Paris.

While the fundamental elements of the pterodactyl storyline are brought to a close by the album's end, Adele's own interests continue on into the next story, "The Eiffel Tower Demon." This establishes a precedent by which the reader is able to gain a sense of closure from each individual story while being invited to follow the larger story concerns on into the next. There is something silly about the way Tardi weaves petty crime and supernatural hoo-ha to create these stories, and yet his delivery makes the reader feel like he or she is in on the joke, rather than the butt of it.

It is tempting, from this distance in time and place, to hope that Tardi's work here is representative of the general quality of French BD from this period. Tardi was then and remains today one of the great masters of his art form. Very little of the non-Tardi bande dessinée contemporary to the Adele Blanc-Sec stories holds up with the same poise, both to his credit and our disappointment. Readers interested in some of the best of what French BD has to offer should seize this opportunity to make this and other Tardi books now available in English part of their library.