Remnants of Another Age by Nikola Madzirov 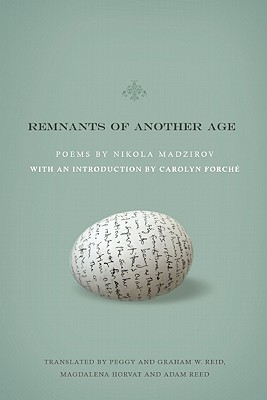 Remnants of Another Age is a bilingual Macedonian-English edition of selected poems by Nikola Madzirov (b. 1973), an internationally acclaimed poet of a younger generation. Madzirov represents yet another genuine lyrical voice of the Balkans, from the territory of the former Yugoslav republics. His poetics are founded on a specific type of nomadic wandering between variously opposed geographical, cultural, and spiritual territories that determine its characteristic existential position. Because of this, the poetic voice sees itself as a palimpsest comprised of several layers of memory, always reflected from an inner standpoint. The poem "Things We Want to Touch" begins with the line, "Nothing exists outside us."

Although Madzirov evokes the mythical and historical migrations, exiles, and wars that were waged in the Balkans, his poetry primarily reveals his private and personal mythology. This can be found in the long lines of his poems, highly resembling prose poems ("I don't know" and "Ruin Homes"). The lyrical mythology of this poet is formed around fragile, precise, and expressive images that alternately emit light and darkness, shadow and dust. The landscapes of these images tend to be fantastic at times, almost mystical, with narrative elements that sharpen their symbolic potential.

Growing up homeless or between shelters, nostalgia always at hand, Madzirov shapes the former reality and saves it from oblivion by randomly writing down its visible yet hidden traces, and by naming things that nobody before him has seen or written down: "We forget / things even before we lose them - / the calligraphy notebook, for instance. / Nothing's ever new." Still, the principle of the repetitive cycle of life, remembrance, and death and the desire for love are always realized in a particular, specifically chosen moment. This moment, however, makes the poetic present transparent for both past and future, and for their mutual reflection in time that transcends the known world. As a result, a truly melancholic and elegiac atmosphere permeates these lines, despite occasional incantations, for it constantly reminds us of words that condense silence, which precedes and follows our lives.

The poet's vulnerability is thus equated with his mute testimony without witnesses: "My absence is a consequence / of all recounted histories and deliberate longings." And no matter how strong and painful this longing to go back to the original state of innocence and wholeness is, it might be the only thing that sustains the poet in and out of time. His transience can be measured by the intensity of spiritual and physical sufferings found in Madzirov's superbly modern religious imagination, as combined with the image of the body as a metaphysical entity: "I have a heart pierced by a rib. / Fragments of glass float through my blood / and clouds hidden behind white cells."

For Nikola Madzirov, to separate from one's self, to be alone—in order to commit oneself to air, fire, stars, and angels—means the return home, to earth, to those ancient habitats that preserve the remnants of bygone ages.