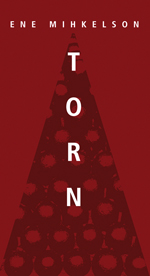 Second only to the late Jaan Kross and alongside Mats Traat, the creator of a lengthy rural series, Ene Mihkelson (b. 1944) is the most prominent contemporary Estonian novelist. Mihkelson's eleven collections of free-verse poetry and six tensely interwoven novels constitute a new, Mihkelsonian high literature.

Last year, Mihkelson received the Baltic Assembly literary prize for Torn (The tower). Her collection of poems amounts to a poetic coda, a "tetrastic" following her novel-triptych Nime Vaev (The torment of a name), Ahaveeruse uni (The sleep of Ahasuerus), and Katkuhaud (The plague grave; see WLT, July 2008, 67). Torn displays the same serious attitude, anguish, and sorrow to which rich experience gives rise, and offers harsh criticism of contemporary life. But unlike the rather dark introspection that lies at the heart of Mihkelson's previous work, Torn evokes a stimulating openness to the world.

Mihkelson's poems are crystallized outlines of prose narratives concerned with pressing social issues: a constant worry about the persistence of national identity and moral memory, the enduring, looming danger of a cultural holocaust: "Only we keep speaking a strange worn out / language when one should say directly Put yourself in prison / Establish censorship Do not cheer before evening / The Night of the Long Knives may come again" (from "Retreat into tower"). Those who ignore the torments of bygone totalitarianism are at risk of losing their soul: "But we must speak of pain to cut off / the glorification of victimhood" (from "When General Laidoner ordered the opening of borders").

Mihkelson's poetics resembles the technique of Estonian composer Arvo Pärt's tintinnabuli: the more distance to hit music, the closer to a symphony. Her texts are not metrical yet are composed with utmost precision. Each and every phrase is important in its analytic difference, displaying distinct pauses and stresses. She makes frequent use of enjambment: a regular transmission between two verses as well as semantic crossovers inside single lines—the internal enjambment. With its style of dignified thought units,Torn is like the poetic hadron accelerator of cern (to which she refers in her book), creating collisions of motives and phrases on its magnetic memory field: some of the particles will be torn apart, others infused with hope.

"The initial idea was the impossibility of closure," the poet revealed in an interview. The final cycle of the book bears the title "Caspar Hauser"—a reference to the satire by Jakob Wassermann (1908) about an autistic foundling with his private language who had spent his entire childhood in a dark prison tower before the "humane" society decided to "civilize" him. On behalf of herself and her homeland, Mihkelson poses sarcastic questions, such as: "How to grow out / from the cocoon of being a victim and to say that it was / wrong to spare my life" (from "To the feinschmeckers"). Though her poetic persona expresses concern that "My voice has no bearing No echo / Who observes me in reality" (from "Short circuit"), her message resonates well among her readers in Estonia.