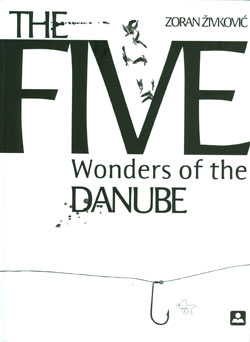 Zoran Živković spoils his readers. Almost every year since 1997 has brought us one or more of his singularly provocative books. Each is wholly unlike its predecessors even as all probe a handful of themes. But one need not be a Živković regular to enjoy The Ghostwriter and The Five Wonders of the Danube. Both offer an imaginative encounter with a master fantasist at the peak of his powers.

Its title notwithstanding, The Ghostwriter features nary specter or spook. It recounts a morning in the life of a writer who is entangled in simultaneous email dialogues with several correspondents. This may not sound like much of a story—but wait till you meet these correspondents. We know them only by their emails. But to know them is to loathe them.

There's "OpenSea," a self-anointed "Great Writer" whose relationship with our protagonist is one of mutually assured detestation. There's "Banana," an aspiring writer who, having won our protagonist's goodwill through fulsome praise of his works, has been emailing weekly accounts of her dreams, unrelated narrative fragments she fancies constitute a novel. There's "P–0," who has undertaken to write pastiches of our protagonist's entire opus. There's the aptly aliased "Pandora," who has been writing short sketches that feature some small animal and a lone human: our protagonist. And, on this morning, a new presence appears in the writer's inbox, "Admirer," who proposes that the writer "do the most shameful thing a writer could do."

Everyone is determined to get something from the writer who, because he is vain but also polite and considerate, becomes ensnared in the ever more tangled webs they weave. Interrupting his increasingly frantic efforts to extricate himself are interventions by his beloved tomcat Felix, whose antics are sure to enchant anyone who has shared life with a cat.

No work by Živković is without substance, and The Ghostwriter ponders the rights of authorship and the indeterminacy of identity in the Internet age. But at heart, it's a jeu d'esprit: a lighthearted, funny chronicle about a man, his cat, and a clutch of decidedly dire correspondents.

So different from The Ghostwriter is The Five Wonders of the Danube that at first it's hard to believe they're by the same author. Here, Živković constructs multiple narratives around five imaginary bridges. Each spans the Danube in a different city. Each is painted a single color: the bridge at Regensberg is black; the one at Vienna, yellow; at Bratislava, red; at Budapest, white; and at Novi Sad, blue. And each is a locus of otherworldly forces that can manipulate reality as experienced by humans on or near it.

Wonders begins with a touch of satire and ends with a rush of euphoria. But its soul lies between. Here dwell darkness and tragedy, but also hope and humanity, base materials Živkoviﬂ molds into some of his most moving stories.

One narrates the friendship of two homeless men trying to survive a bitter winter at the base of the bridge in Bratislava. Known to each other only by assumed names, Isaac and Fyodor scrabble for food and fuel and sleep in rusted barrels. For companionship, Isaac has only his dog; Fyodor has only six novels by Dostoyevsky, which he shares with Isaac. As a bond grows around their appreciation of the great novelist, so does the urgency of their plight. Still, the men inspire each other artistically. The intersection of their mutual inspiration and the mysterious forces at the bridge propel Živkoviﬂ's story to its enigmatic but deeply affective ending.

Artistic inspiration also drives the story of a young man who comes to Budapest to study music. He soon becomes enchanted by the Danube and one of its bridges: "Not a day went by without crossing the White Bridge at least once." One night he sees a young woman about to jump from the bridge. He tries to persuade her not to take her life. She hesitates. He starts to move forward. Suddenly, "a cascade of music washed over him . . . as though the bridge had suddenly turned into a gigantic orchestra."

Immobilized by the "demonic music," he cannot save her. Later, he decides to publish the compositions as an "homage to the young woman." Thus does the bridge lead him into a mire of moral and ethical quandaries that will torment him for the rest of his life. The musician's tragedy haunts us with the question, What price would we pay for assured, albeit unearned, success?
Curiously, the phantasmagoria of fantastika that ends Wonders leaves us aware that the true wonders in life are not fantastic, are not the Seven Wonders of the World, are not even the wonders Živkoviﬂ has conjured in this novel. The true wonders are all about us: in nature, in relationships, in art. For The Five Wonders of the Danube is a work of art as sublime as the work of nature it honors. (Editorial note: The Serbian edition of The Ghostwriter appears in a collection called Novels; it is forthcoming from PS Publishing as a stand-alone title in December 2011.)