The Papyrus Trilogy by Zoran Živković 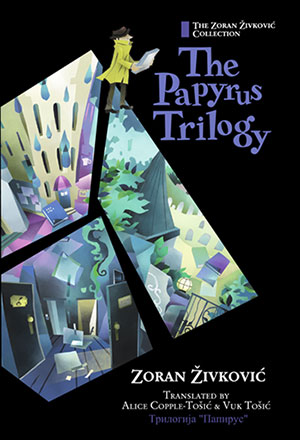 Around the world, in over twenty-three countries and twenty languages, readers have long delighted in the works of visionary Serbian fantasist Zoran Živković. Yet for all his international renown and awards—most recently he was named 2017 Grand Master by the European Science Fiction Society, only the eleventh author to be so honored—Živković has nowhere near the English readership his work warrants (see WLT, Nov. 2011, 22–29). The reason, I think, is a long history of erratic publication of English translations by British and American publishers, often in small, hard-to-find editions. Happily, Cadmus Press has begun publication of uniform editions of English translations of all of Živković’s twenty-two books—including, as here, new stories.

Among the first is The Papyrus Trilogy, an omnibus of three linked detective novels featuring Police Inspector Dejan Lukić. In interviews, Živković has declared his aversion to all genres: “Any generic restrictions are highly damaging for literature.” No genre is more hamstrung with restrictions than the classic detective story. Yet here we have three that not only adhere rigorously to convention (at least at the outset) but share many common elements.

Each novel begins with a seemingly impossible event: The Last Book with the medically inexplicable deaths of several patrons of the Papyrus Bookshop; The Grand Manuscript with the disappearance from a closed, locked room of a famous author and her latest manuscript; Compendium of the Dead with the appearance in the thoroughly guarded rare-book room of the National Library of a second copy of a fifteenth-century incunabulum known to be unique. Each event triggers an investigation by Lukić, which soon attracts the attention of the secret police who, under the guise of cooperation, doggedly track and surveil the inspector. Each turns out to hinge on a book purported to possess truly miraculous powers, which make it the grail of a secret cult led by a Grand Master who, of course, remains anonymous to the very end.

All of which makes these novels sound far more schematic and repetitive than they actually are. What particularizes them are the witty, intricate development of each case; their richly drawn, engaging characters; and Živković’s diverse play with the underlying challenge he has set for himself: like Arkady and Boris Strugatsky’s The Dead Mountaineer’s Inn, these novels interrogate the possibilities and limitations of the detective genre. Živković does so by introducing into the reality of the novels a single fantastic element that undermines core principles of detection.

Beyond generic concerns, these novels are variations on a theme that recurs throughout Živković’s fiction: the ontological status of consensus reality in relation to fiction. That Živković can probe so substantial a theme in such lighthearted works is one measure of his art, the best of which ranks with those of Mikhail Bulgakov, Italo Calvino, and Stanisław Lem.

With this book, Impossible Stories I, and the heretofore extremely rare masterpiece Five Wonders of the Danube, Cadmus’s “Zoran Živković Collection” is off to a great start. If you’ve not read Živković, indulge yourself: worlds of wonder await you.