The Deleted World by Tomas Tranströmer 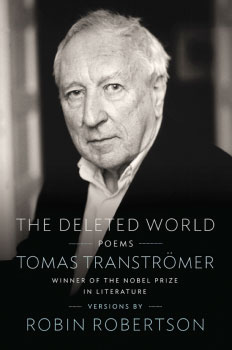 When Swedish poet Tomas Tranströmer received the 2011 Nobel Prize in Literature, almost all European critics had to look him up in various reference works and encyclopedias, whereas their Scandinavian colleagues all agreed that Tranströmer was superbly qualified to win the prize. And in Great Britain and the United States he is not entirely unknown, thanks to a number of fine translations, particularly by Robin Fulton and Robert Bly.

The motivation for the prize was “because, through [Tranströmer’s] condensed, translucent images, he gives us fresh access to reality.” This almost vacuous statement, of course, does not even scratch the surface of Tranströmer’s genius. Hence the present, bilingual volume with its insightful introduction is more than welcome, especially since the translations by the Scottish poet Robin Robertson are nothing but marvelous with regard to the poignant imagery and supple rhythm of the texts.

As the title indicates, the selection is built around the theme of deletion, even extinction: “The tugboat is freckled with rust. What is it doing so far inland? / It’s a heavy burnt-out lamp, tipped over in the cold.” A harsh, wintry, and melancholic scenery prevails—death is omnipresent—but Tranströmer frequently adds a metaphysical perspective, the hope of redemption, to his otherwise dark and somber nature descriptions from the Swedish coastland: “There is a silent world, / there is a crack / where the dead / are smuggled over the border.”

It is impossible to reduce Tranströmer’s poetry, with its almost inexhaustible thematic opulence, to a formula. Nevertheless, political issues are only rarely and indirectly addressed, and Robertson has wisely chosen not to include such ephemeral texts in his slim volume. Rather, he has focused on a series of existential statements, which take their point of departure in observations of life in nature combining simplicity with complexity. And here it becomes obvious—quite contrary to the prize committee’s motivation—that external reality rendered with a keen sense of contrasts and duality only serves as a starting point for deliberations on modern man’s distance from nature and the threat of our present technological and bureaucratic world. These are observations and deliberations that point to another hauntingly depicted realm of mystery, vision, and wonder. Indeed, in many ways, Tranströmer is a true romantic.

The fifteen selected texts confirm that not only is Tomas Tranströmer Scandinavia’s greatest living poet, he should also be acknowledged as one of the world’s most important authors.