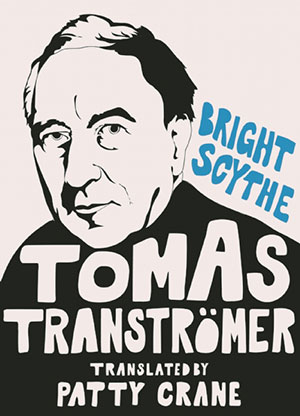 Sometimes a new piece of shared cultural heritage seems to click into place; the appearance of Bright Scythe—selected poems by Swedish Nobel laureate Tomas Tranströmer, translated by Patty Crane—feels like such an occasion. These poems are adamantly delicate parcels of offhand eternity, dwelling in a space few have inhabited usefully in any sustained way.

Differences between Crane’s and previous translations are subtle and numerous, informed by her years of acquaintance with the Tranströmers, often revising with them in person, in meticulous detail. In some cases these liberate a more enchanted timelessness from the originals. So instead of Robert Bly’s translation, “and someone pays no tax to Caesar,” in “Allegro”—the densely wry, delighted poem about what it feels like to play Haydn—Patty Crane gives us “and someone isn’t paying the emperor tax.” In place of the title “National Insecurity”—as given by Robin Fulton in an older Bloodaxe edition—she calls her version “Insecurity’s Kingdom.” Such choices nudge these translations away from a temporal/political edge toward the metaphysical/eternal, which are these poems’ more naturally hard-won terrain.

Crane also allows some delighted surprise at the greater facility Swedish has in coining compound words, such as in “The Stones,” where she renders glasklara, often dulled as “crystal clear” in English, afresh in a mirror translation: “The stones we have thrown I hear / fall, glass-clear through the year.” Hearing and seeing—the onomatopoetic effects of words and their objects’ glinting surfaces—form two of the more notable characteristics of these clear, precise, fine poems, continually foregrounding the border between reality and that deeper reflection which direct perception affords.

Tranströmer’s hand sometimes aids the English translation directly, as in “The Baltics,” where he puts the turn of phrase “no man’s water,” already cloyingly in English in the original poem. This remarkable poem is a centerpiece of this volume. The seafaring grandfather in the poem derives from the poet’s close grandfather, Carl Westerberg, launching out onto the Baltic Sea “before the time of radio towers.” The poem quickly breaks through into territory where water, land, and religious consciousness mutually imbibe and exhale one another—in language shorn of ornament yet immediately evocative and thought-compelling.

In poem after poem, small, completed parcels of deep thought and observation are anchored to the page. Sometimes it startles from the first line: “Outside the window is spring’s long animal” (from “The Light Streams In”). Sometimes lines end up as chiseled as Thomas Hardy’s, as in the second line here from “From the Island, 1860”: “One day as she rinsed her wash from the jetty, / the bay’s grave cold rose up through her arms . . .” Most often, though, it is not from any neat stylizing that these poems derive their simple, clear power to move and astonish. If, as Borges says, “poetry springs from something deeper,” then these poems are leaded windows and fine-hewn doors ajar into that fathoming—rendered in “glass-clear” translations—and a lasting tribute to the poet’s passing earlier this year.