The Things We Don’t Do by Andrés Neuman 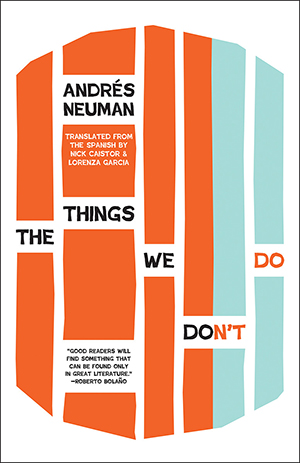 Some books demand a slow reading, requiring a period of acclimation. We pick them up in intervals, glimpse their interiors with trepidation. Such is the case with Andrés Neuman’s newly translated The Things We Don’t Do. The Argentine author is not so much writing fiction as he is testing out philosophical theorems by creating stories. There are thirty-four of these experiments, most of them shorter than five pages, all more complicated than they first appear though not necessarily difficult to read. The best of them leave the reader lighter and amused.

Imagine if Lydia Davis, Jorge Luis Borges, and Donald Barthelme spawned a literary child; we might get musings such as these. Take, for example, the story “The Poem-Translating Machine,” in which a poet is dissatisfied by a translation of one of his poems and sends it to another poet to translate to see how the two compare. Then he sends it to another poet, and another, obsessively, like a game of telephone, grumbling as each version comes back slightly different from the last. Neuman seems to enjoy turning almost any situation into a psychological cat-and-mouse game, as he does in the story “Juan, José,” a story that alternates between the points of view of the eponymous men, each professing to be a therapist, insisting the other is his client. This back-and-forth leaves one guessing at who the “real” therapist may be. And this is typical in this collection: for whom are we rooting, who is in the “right,” and who or what is real?

The stories are grouped into six categories, most are in first person, and most are working out the sort of riddles already mentioned. But we also see stories about family legacies, identity, relationships, and loneliness. The tone ranges from silly to serious. Often the dialogue mirrors reactions that I, as a reader, had. For example, in the parable “A Line in the Sand,” a frustrated woman doesn’t do what we might expect after feeling wronged by her husband; instead, she (literally) draws a line in the sand on the beach and dares him to cross it. He stands amazed, confused, and exclaims, “This is absurd,” to which she replies, “That’s the point.” The reader is inclined to say as much about many of the stories in this collection: they are odd, funny, bizarre, and, ultimately, absurd.

The last section, called “Dodecalogues from a Storyteller,” outlines four sets of twelve axioms for writing that give the reader a clue as to the intent of the author and a set of tools by which to understand better what the latter have just begun to digest (see WLT, May 2014). Perhaps as a warning as much as an invitation, one of these axioms states: “A completely rounded story encircles the readers, does not let them out. In fact, it does not let them in either.” So true of these fresh and quirky stories.