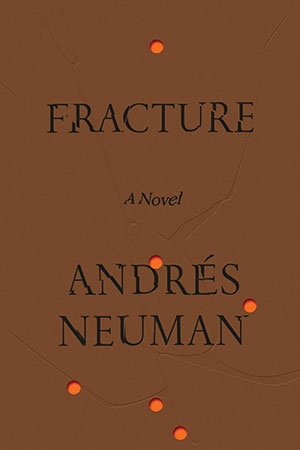 “AN EARTHQUAKE FRACTURES the present, shatters perspective, shifts memory plates.” In Fracture, Andrés Neuman revisits the Latin American genre of the total novel, an all-encompassing narrative exploring every theme, social milieu, and emotional possibility. It’s a reflection on time, a powerful tale about how we reread and react to the past. Themes of identity, travel and translation, memory and love, loss, trauma, and mourning tightly interconnect.

Neuman uses imaginative, highly poetic language to tell a cinematic story constructed like a puzzle while raising urgent social, political, philosophical, and ecological issues. This tour de force, akin to a six-voice musical offering, recounts the journey of Yoshie Watanabe, survivor of the atomic bombings, whom we meet as he is about to experience the earthquake preceding the Fukushima nuclear disaster. This event stirs long-repressed memories. The novel’s chapters alternate between present and past through Watanabe’s perspective (as viewed through the narrator's tender and, at times, tongue-in-cheek lens), the four women who have shared his life—between Paris, New York, Buenos Aires, and Madrid—and an enigmatic Argentine journalist.

We follow Watanabe around the globe in his search for love, answers, and identity. He wonders whether “all of his travels weren’t the quest for a shifting goal.” Travel as the path to find one’s way echoes Die Winterreise, Wilhelm Müller’s poems put into music by Schubert, which Neuman translated into Spanish.

In Paris, Yoshie’s French lover, Violet (the poet Shelley used this flower to commemorate the grief of a lost love), describes their idea of traveling as an escape plan: “He gave the impression that he was testing out his identity, like someone constantly trying on clothes to see if they fit.” Yoshie jokes, “I didn’t realize I was Japanese until I left Japan.” When he returns to Tokyo to retire, he realizes that “the culture shock of returning to his country was greater than that of leaving.”

In New York, with his American lover, Lorrie, he finds himself in a city “full of strangers who made him feel at home.” His previous cities “have accustomed him to melting pots. They make him feel he is in several places at once.” The theme of ubiquity links to that of rootlessness. Does one belong everywhere and nowhere simultaneously? When he is with Argentine interpreter Mariela, Yoshie becomes aware that he also “developed an emotional ubiquity. Each of his emotions was, partially at least, always somewhere else.”

Mariela argues that translation “allows you to discover part of your identity, thanks to some foreign pretext.” Translation is an act of love and a way to be in the world. As we transform someone else’s words into our own, we seek to understand them. We create and build bridges between languages and cultures. It is also a bodily act; we move between languages, and the borders are porous. It’s an emotional, intellectual, and physical process. The recurring theme of translation and the untranslatable also dominates Neuman’s previous masterpiece, Traveler of the Century, which states that translation is culturally necessary.

Mariela confides in Yoshie that “countries are never that different from each other.” It’s something she’s learned from translating: “No matter how many differences and limitations you come across, in the end what endures is what’s translatable. What we succeed to do with the things we understand.”

Memory and language intertwine. When talking to Argentine journalist Pinedo about Yoshie’s relationships to the countries he’s lived in, Mariela explains: “He was obsessed with collapsing borders. Imaginary ones, I mean. He wanted somehow to unite his cities, his languages, his scattered memories.”

Yoshie came to French through his love of slow and romantic movies, to English through rock music, and was passionately conquered by Spanish. He then realized that “with this change of language he had once more shed his skin. Rather than someone who spoke different languages, he felt that he was as many different people as the languages he spoke.” At the same time he also felt he was always “translating himself.”

For Yoshie, “every immigrant who flees Japan is deserting a land that has never assimilated them. It goes without saying that foreigners will always be deemed outsiders here, regardless of how long they have lived in the country.” He thinks this is “both a limitation and an advantage. Ultimately there is no greater hospitality than when a country, instead of forcing you to fit in, allows you to remain a foreigner.”

The subject matter calls for the destruction of boundaries: in geography, relationships, and language. Watanabe left Japan because he feared radiation, but also because “for a long time he believed that by staying away from that place, he was protecting his pre-nuclear memory.”

Through unreliable maps and clocks, we can detect Calvino’s influence—in Invisible Cities, nothing is as it seems either. Watanabe’s maps “begin to contradict each other. . . . Could the place-names of the region have switched? Could the ground have moved so much?”

When recalling their lives with Yoshie, all four women contemplate their pasts, their ghosts and losses, just like him. For Mariela, “a good memory asks itself: What can I do with what was done to me?” Mariela asserts that choosing to forget some memories “condemns you to an endless contradiction, because a trauma that isn’t spoken about can’t be truly forgotten. It literally can’t rest.”

Argentina, where so many were disappeared, provides another insight into the disruptive nature of tragedies: “To disappear . . . belongs to another dimension of death . . . it prevents mourning.” Something similar happened with the atomic bomb; people remember the mushroom cloud, but the victims remain unseen.

The ancient art of Kintsugi (cracks in pottery filled with gold) is a leitmotif throughout. These fractures are beautified and ennobled, and answer Yoshie’s question: “To what extent is damage reparable?”

The timing of the publication of Fracture is uncanny. It crafts a mirror between two eras that are not so different. When he finally returns to Japan, Watanabe is told that “catastrophes spark revolutions that no one would otherwise attempt.” We all want to return to normal but wonder if we can or should. Pinedo investigates disasters for a newspaper and is “obsessed with the collective memory of disasters; the way countries forget the pain they have suffered or caused, the way all genocides end up resembling one another, plagiarizing one another.”

Fracture is a profound, captivating novel, written with confounding intelligence and wit, a heartbreakingly beautiful exploration of human consciousness.

Hélène Cardona’s recent books include Life in Suspension and Dreaming My Animal Selves and the translations Birnam Wood (José Manuel Cardona), Beyond Elsewhere (Gabriel Arnou-Laujeac), Ce que nous portons (Dorianne Laux), and Walt Whitman’s Civil War Writings. Her work has been translated into sixteen languages. The recipient of over twenty honors and awards, she holds an MA in American literature from the Sorbonne, worked as a translator for the Canadian Embassy, and taught at Hamilton College and Loyola Marymount University.