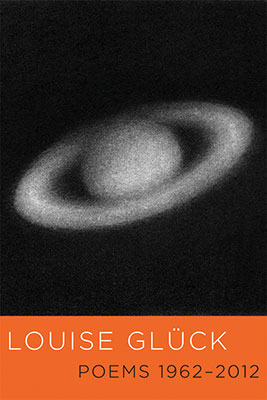 Emerging from a reading of this accomplished collected works is like having run a rigorous marathon. While in shorter individual collections Louise Glück’s consistency of tone has the effect of unifying her poems, in a much larger assemblage like this one, the boundaries of individual poems seem to dissolve and merge into what has the feel of one long, extended poem that is an invigorating but demanding read. Glück’s voice is like no other in modern American poetry. Her poetic domain—like that of Wallace Stevens—lies in the seclusion of analytic thought. The seamless continuity of her verse suggests a mind in perpetual meditation, deliberating in a state of waking dream. Her laserlike intensity purifies as it objectifies and erodes, leaving an indelible impression on the reader.

Poems from Glück’s early collections—Firstborn, The House on Marshland, and Descending Figure—explore the subjects of maternal rejection, an older sister’s early death, and an emotionally inaccessible father in spare, psychoanalytically charged language. The tone can unexpectedly shift, as in “Epithalamium,” from the grandeur of abstraction to colloquial irony: “grief of the body, whose language / is hunger – / and in the hall, the boxed roses: / what they mean / is chaos.”

In the collections of her middle period—Triumph of Achilles, Ararat, The Wild Iris, and Meadowlands—other subjects appear, notably a wry series on domestic unease that ultimately results in marital collapse, as in “Mock Orange”: “Do you see? / We were made fools of. / And the scent of mock orange / drifts through the window.” Earlier familial themes are transformed through the perspectives of such mythological figures as Penelope, Odysseus, and Telemachus, all evoked in modern idiom. Poems from this group, such as “Telemachus’s Kindness,” can bring youth’s brutally explicit assessments of family behavior—“I had no father; my mother / lived at her loom hypothesizing / her husband’s erotic life”—into balance with the more compassionate perceptions of maturity: “as a grown man / I can look at my parents / impartially and pity them both.”

Later collections feature some formal innovations, though the tone remains unsentimentally austere. In Vita Nova, Glück introduces the haunting format of the interview; the subject in “The Burning Heart” is Dante’s Francesca, whose responses to the interviewer’s pitilessly direct questions (“Ask her if the fire hurts”) are delicately evasive and oblique: “. . .  gradually I understood / that though neither of us ever moved / we were not together but profoundly separate.” In The Seven Ages, Glück gracefully lengthens her line and uncharacteristically unifies poems like “The Sensual World” and “Arboretum” with central metaphors. Her final and most recent collection, A Village Life (see WLT, July 2010, 74), is a cycle of poetic narratives about the communal life of a Mediterranean village that suggests the influence of the Italian poet Cesare Pavese’s Lavorare Stanca in its simplicity of language and the hypnotic force with which it mythologizes human relationships in poems like “Marriage”: “He never uses words. Words, for him, are for making arrangements, / for doing business. Never for anger, never for tenderness.”