The World Is Moving Around Me: A Memoir of the Haiti Earthquake by Dany Laferrière 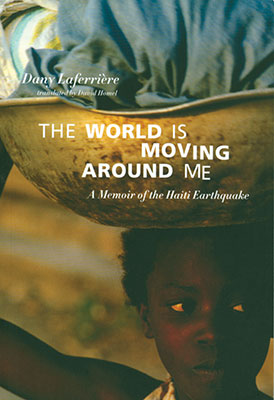 Like many Haitian writers and artists, the novelist Dany Laferrière has been living abroad for many years—in his case, since 1976, mostly in Quebec. He was visiting Haiti when a massive earthquake struck the country on January 12, 2010, leaving three hundred thousand dead and over a million homeless. Originally published in French as Tout bouge autour de moi (2010), this book is his firsthand account of the disaster and its aftermath. Most of his texts have been partly autobiographical in nature, and this impressionistic, fragmented chronicle is no exception. With the world literally and figuratively moving around him (Laferrière often chooses provocative titles), he is led to explore his role as a writer—and, no doubt, his survivor guilt—on a grander and more tragic scale than he could possibly have imagined.

The narrative is divided into a series of very short sections, some no longer than a paragraph. Many of the earlier sections directly and simply recount the author’s reactions during and immediately after the initial 7.3 magnitude tremor: he was seated at a restaurant when he “heard a terrible explosion”; he ran outside, where “the earth started shaking like a sheet of paper whipped by the wind.” Like others who had been lucky enough to make it outside, he could only watch while buildings collapsed, crushing their occupants.

Later sections chronicle his attempts to reach friends and family members during the first days of shock and relative isolation. As a Canadian national, Laferrière had the opportunity to leave Haiti, but he soon returned. He decided early on that he would write about the earthquake, which leads to sections devoted to whether a work of fiction is appropriate for a disaster of such a magnitude. In one such section, Laferrière’s nephew, who has literary ambitions of his own, asks him not to write a novel about the earthquake.

Not surprisingly, the importance of the disaster for the already impoverished population is often stressed: “We say January 12 here the way they say September 11 in other places.”

Laferrière offers thoughts on Haiti’s immediate reconstruction and long-term future while reminding readers of the country’s sometimes glorious, often tortured past. The author also wonders how the disaster will affect the Haitian nation’s artistic traditions: “What art forms will be the first to come forward after the earthquake?” (see WLT, Jan. 2013, 26–28). However, these thoughts and questions lead to few insights and fewer answers. Laferrière’s tone is generally matter-of-fact, and he sometimes appears to be a somewhat detached (though painstakingly detailed) observer. He certainly avoided the sentimental traps of either wallowing in misery or producing a paean to the indomitable human spirit in the face of disaster. An eyewitness to an extraordinary event, he has written a fairly ordinary book. Perhaps this was the only possible short-term literary response.