Rivers of Letters, Rivers of Mud: Reflections on Raquel Rabinovich

Raquel Rabinovich is a poet of the visual world. In the following meditation, Marjorie Agosín reflects on her fluid and ever-changing art.

When Raquel Rabinovich came to speak at Wellesley College in early spring 2015, the snow was still heavy on the ground, but the sun timidly appeared through the windows of the Margaret Clapp Library. Raquel’s face seemed to be a part of this chromatic landscape, a landscape of darkness as well as light. When she began her lecture, I noticed that she was careful with her words: she always paused before speaking with a special grace, almost as if she were creating—with her presence—a visual experience. When I look at her work, I remember her serenity, and I also pause to contemplate her creations. They are ambiguous and filled with mystery. Impossible to define, they require the effort of an earnest viewer who seeks to participate in her works and inhabit her creations. The chromatic manifestations of many of her creations seem to reveal both dark and light, mysteries and possibilities. Raquel says that she does not want to explain her work; rather, we must be the ones to enter it.

I have spent much time listening to her words and reflecting quietly on her multifaceted artistic creation. In this brief meditation, I invite the reader to join me in what I have found and in what I continue to find. Her work is fluid and always ever-changing.

Raquel Rabinovich’s art has to do with what at first seems to be unseen and then gradually becomes noticeable but not necessarily understood. She is interested in what is ambiguous and what takes time to be revealed. The observer must engage with her art, creating a dialogue and collaboration. More so for her, extraordinary art is an invitation to inhabit her world with those who wish to view her paintings with the serenity of an observer who is aware that what appears to be may not be—what is deeply dark may emerge also as light. . . .

Raquel’s soft voice often seems to convey a deeper inner state of reflection. She uses metaphorical language to address the everyday, and it seems that her surroundings—from the forest of her home to the Hudson River, site of many metaphorical installations—are essential parts of who she is as a person and as an artist. I often ask her if I can take note of her words that, to me, seem inseparable from her art.

Born in Buenos Aires in 1929, Rabinovich was educated at the Universities of Córdoba, Edinburgh, and the Sorbonne in Paris. Due to the unstable political situation in her native country during the first reign of Juan Perón, she left for Edinburgh, Copenhagen, then Paris, went back to Argentina, and then to Montreal and New York. Her work began to gain notoriety while she lived in the US, where she began to experiment with several media: collage, pencil drawings, monochrome series, etc. Raquel is an indefatigable observer of the world around her—a world that she then meticulously, gingerly adapts to become her art. In her Rhinebeck, New York, studio, I sit quietly next to her and try to imagine what lies ensconced beyond the grays and blacks we have in front of us. As in poetry, words often give form to and become the very perception of their readers; when I regard Raquel’s work, I feel I am entering a sacred visual text.

In our conversations throughout the years, Raquel has often looked at me and said that poets truly interest her, and I’ve smiled in response. She believes that a poetic imagination allows us to see the unseen and to perceive that which is not revealed to our eyes. I believe this is an essential way to look at her art.

The act of reading poetry also requires a passion and a commitment from the reader—an epistemological, cognitive bond that Raquel similarly requires of her art. In a recent visit this spring to her home in Rhinebeck, I had the opportunity to spend time with her—to hear her memories of Buenos Aires; to have conversations on Jorge Luis Borges, Roberto Juarroz, and Alejandra Pizarnik; and to listen to her stories of nomadic life that have inspired her art today.

Raquel believes that language and the visual arts are intertwined and in a perpetual dialogue. She says she gets her inspiration from the reading of poetry, and I feel that the work that most touches the poetic imagination is her work called River Library.

Raquel has been fascinated by rivers since the 1970s; she has said they resemble the fluidity of life—the movement of water—and in a very poignant way, Raquel once said to me and to our students at the college that rivers are free. They come and go as they please, and borders or governments do not bind them. But rivers have stories. For example, in one of her trips to India, Raquel collected mud from the Ganges. This is a sacred river, filled with rituals and burning bodies. The ashes tell an ancient story, she says. And thus, these river alphabets tell a story that precedes even the creation of language.

These river alphabets tell a story that precedes even the creation of language.

The mud Raquel collects, from all over the world, has the power to weave stories. Often in ancient history, the rivers have served as both place and destination, much like the Kumbh Mela that continues to be used for pilgrimages in India as well as the Nile, whose layers of mud bore witness to journeys made by Egyptian kings. These rivers contain layers and layers of mud. In the past, I’ve promised Raquel to bring mud from Chile—from the Mapocho River, where innocent bodies were thrown into this sacred body of water. I understand Raquel’s magical and visionary way of thinking. She believes the rivers bring us histories and secrets.

For Rabinovich, the layers of mud—a river’s mysterious process of sedimentation, blanketing, and coating—speak of a particular unity that is manifested through the fluidity of the water. It is a fluidity without boundaries, only freedom—an extraordinary metaphor for the power to imagine and to transform through art and through another kind of language. Such is a language that is manifested through the alphabets of mud that also tell stories of darkness and stories of light.

Together with the creation of the mud sequels that Raquel has been working on for a number of years, a parallel art form takes place. She calls it Emergences. Raquel started this project after she moved to Rhinebeck and began the process of collecting different rocks from the Hudson River—rocks of different shapes and colors. She worked with riverboat captains and even ecologists, searching for river sites to create these extraordinary installations. These installations can be measured and understood in terms of the six-hour cycle of high tide and flow. The stones seem edgeless, unassumingly arranged around the shorelines; they are barely seen at low tide. Instead, the eye focuses on the vertical rise and fall of the tides. The stone installations have thus become a part of the landscape and are seen as they integrate changes found in nature such as storms, wind, and erosion. Raquel has the power to synchronize such rhythms of life: the unexpected, the permanent, as well as the ebbing of things. Eventually, Raquel says that the river will make these stone installations invisible, but such is our life and the passages of life to death we are shuttled to and from. Nature will assume responsibility for the fate of the stones, much like the earth does for our lives.

Eventually, Raquel says that the river will make these stone installations invisible, but such is our life and the passages of life to death we are shuttled to and from.

As a poet and observer of the physical world, I find her art in the River Library project as well as in Emergences extraordinary. Through her art, I wonder how the possibilities of nature have been tied to the human imagination. And it is through her art that I realize that we must not seek to assume control of these processes of nature but rather be a part of them.

I often find myself thinking about Raquel’s installations, her libraries of mud, and her work of multiple stones. They remain vividly in our imagination, as we can walk through them; we can see them and feel them. Often we can even hear the stones, as they are in a perpetual dialogue with the waters.

Raquel works with multiple media: mud, stones, line drawings, and monochromatic paintings, where only one color is featured—often gray, as in her series called Gateless Gates, where a series of canvases have a single color but at the same time, at the bottom of the canvas, a single text that viewers must find, must discover, and eventually internalize as their own. The range of gray spans many colors, and ultimately the gray becomes light.

From darkness to light, from visibility to invisibility, Raquel’s work has special rhythms similar to the movement of rivers or the shifts one finds from darkness to light. It is the layers that Raquel adds to her work that make her dialectical vision possible, the different layers of mud she uses when working on the River Library as well as the organic juxtaposition of stones in her Emergences series by the Hudson Valley.

Her work is integral to the landscape of the water and the earth and to human experience in a state of impermanence, much like the movement of water in those rivers. I believe Raquel is a poet of the visual world; she has an extraordinary vision to articulate with natural elements a symbolic understanding of nature, its landscape, and the place we occupy in it. Her work demands of the viewer participation and openness to a pluralist consciousness and to a new way of accepting and being in the world—where fragmentations dissolve into themselves and give way to a deeper unity and fluidity, in both our inner and our outer worlds. 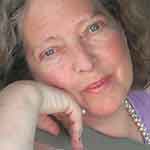 Marjorie Agosín is the Luella LaMer Slaner Professor in Latin American Studies at Wellesley College. She is an award-winning poet and human rights activist whose work addresses issues of social justice as well as the pursuit of memory. The United Nations honored her with a leadership award for her work in human rights. Her most recent books include Braided Memories / Memorias trenzadas and Maps of Memory.