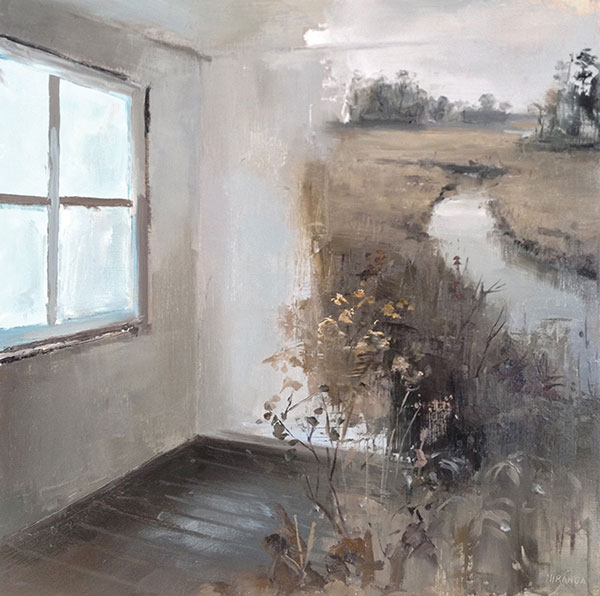 How Much of Yourself Remains Within the Walls of a Home?

I wanted to dive into the troubled waters of forgotten memories, haunt
the house of early emotions but found it empty. I wanted to find the
lingering scent of jasmine where jasmine never grew, even if it wasn’t
spring. Unspoken words fall heavily on the kitchen tiles: a cascade of
rough-edged syllables flood the floor. My chair is glued to the table,
I’m trapped within clouds preventing me from seeing how the marsh
grows wider, how walls collapse, spikes and bluish-green leaves crested
with plumes line the edge of the water where glasswort blushes against
sea lavender.

I’d run my fingers over the red round stems, crush the purple petals under
my teeth to release its essential oils. I can still see the russet tree’s wavering
reflections, its roots, that seemed to come down from the sky. Your body
awakens each night under my fingertips, shortening the distance between
my lips and your skin, until your body remembers, until the sky sinks into
water, mist so thick, a hummingbird floats in minute droplets in suspension.
I feel the current of the first kiss in my curls, our knees shaking. 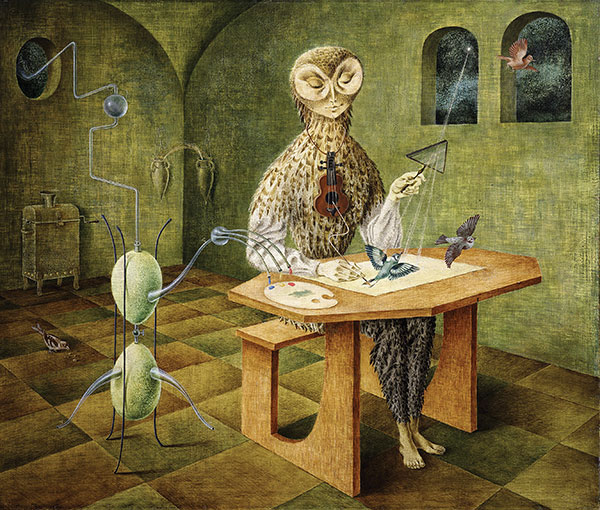 after Remedios Varo’s Creation of the Birds (1957)

All artists are night owls, she thinks, as circles grow wider
around her eyes. Eyelids lowered, her brush, an extension of
her violin-shaped heart, adds the last touches of blush to the
feathers’ tips. She tries to remember the right words thrown
pell-mell in the folds of memory . . . memory adds layers to
meaning . . . wants to retrieve numbers and signs from slumber,
relive the initial moment, imagines how wingless molecules
rub against each other in the copper alembic.

All it takes is a double binding broken loose to find the right
combination: Only verbs are allowed. Aren’t they the heart of a
sentence? What of a wordless message as those from the heart
strung from the right chord? She holds iridium glasses to gather
light from stardust . . . hoopoes, hummingbirds, kingfishers,
finches, sparrows, swallows, warblers, orioles . . . she has lost
track of how many species flew in search of an answer, each
bird carrying its own song, from all corners of the earth.

Her wings aren’t strong enough to cross the seven valleys. She
needs to send an emissary to partake in the colloquy of birds.
Barefoot, she steps over shades of silver dust strewn by shooting
stars, conjures up their broken light night after night. The original
formula . . . lost since time immemorial . . . led to confusing myths
such as people drowning in their own reflection or making love
to their own creation. She knows the secret of the bird’s song, its
loops and roundness, but chooses silence, lets its wings flutter
through the open window. She will try again.

Jeremy Miranda is a contemporary artist, born in Newport, Rhode Island. He creates complex environments that are a hybridization of both interior and exterior spaces. He is interested in the landscape and how people control, fetishize, and dwell within it.

Remedios Varo (1908–1963) was born in Spain. During the Spanish Civil War, she fled to Paris, where she moved in surrealist art circles. World War II sent her into exile in Mexico City where she was influenced by pre–Columbian art. 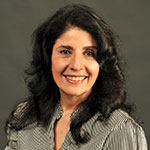 Hedy Habra (HedyHabra.com) is the author of two poetry collections, Tea in Heliopolis (2013), winner of the USA Best Book Award and finalist for the International Poetry Book Award, and Under Brushstrokes (2015), inspired by visual art. Recipient of the Nazim Hikmet Poetry Award, she is also the author of a story collection, Flying Carpets (2013), winner of the Arab American National Book Award’s Honorable Mention.