The Canvas of Encounter. Tàpies Back then I learned that the painter’s
gesture contains both the movement of the planet
and the blade of grass on the mountain.
In his wrist I saw the tree bent
by the wind moan, love’s dawning,
the fruits of the night,
and night  wind  love.
One can read in these paintings
the unruly footprints on the peeling
wall, the chalk and anonymous
whimper, the firmament and attachment,
ropes, cries, the daily
alphabet, chair and closet,
the destructive X that takes over
space and being, the destruction
that is construction, the red and violin
on the metallic door, the nothingness
and the ecstasy: the canvas of encounter.

Translation from the Spanish
By Arthur Dixon & Daniel Simon

Antoni Tàpies i Puig (1923–2012) was a Spanish painter, sculptor, and art theorist who became one of the most famous European artists of his generation. 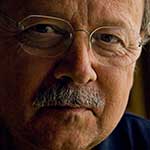 Andrés Sánchez Robayna (b. 1952, Santa Brigida, Spain) has released books of poetry, essays, and translations. He completed a PhD in philology at the University of Barcelona in 1977, directed the magazines Literradura and Syntaxis, and is currently professor of Spanish literature at the University of La Laguna.

Arthur Dixon is a writer and translator from Oklahoma. He is managing editor of Latin American Literature Today, and he blogs at El Greñudo.

Daniel Simon is a poet, translator, and the editor in chief of World Literature Today. His newest book project, Nebraska Poetry: A Sesquicentennial Anthology, 1867–2017, which he compiled and edited, was published in April 2017.