Long overdue, Michael Bazzett’s verse translation of The Popol Vuh (Milkweed Editions, 2018) does for the Mayan creation epic what Seamus Heaney did for Beowulf and Simon Armitage for Sir Gawain and the Green Knight, rendering an English-language version of the most foundational work of literature from the Americas to survive on the page with the poetry that it deserves. In his introduction, the translator states his intention clearly: to create “a lucid poem that the reader can enter and disappear into with minimal framing.” Cognizant of the cultural and temporal perils of translating a text of this nature, Bazzett qualifies his commitment to honoring the text, explaining that “the Maya believe that ancestors are made to live again when we speak their words,” and contextualizing what it means for him to embark on this project given the historical oppression of Mayan culture, including the destruction of twenty-seven screenfold manuscripts burned to ash by the Catholic missionary Fray Diego de Landa in 1562.

Throughout the book Bazzett sustains its narrative propulsion with a mastery of rhythm, tending toward monosyllables to facilitate three- or four-beat lines. 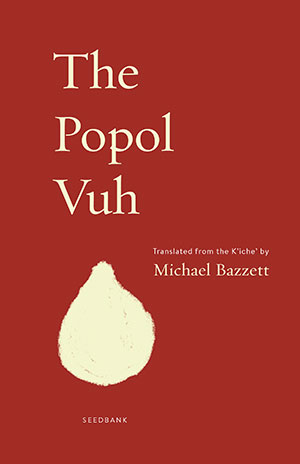 Bazzett employed Precolumbian Maya scholar Allen Christenson’s two-volume scholarly translation Popol Vuh: The Sacred Book of the Maya (University of Oklahoma Press, 2007, 2012) as the source for his cribs, paying careful attention to the “husky consonants spoken deep in the throat and its marvelous sinewy music” of spoken K’iche’, one of the twenty-plus Maya languages still used today, with over two million speakers as of 2016. He explains his most significant choices, including the translation of K’iche’s unique verbs and his decision to end his version of the poem so that the reader is spared the genealogical lineage of the Maya aristocracy that appends its narrative arc.

Recounting the triumphant story of the twin brothers Hunahpu and Xbalanque, whose victory over the lords of the underworld pave the way for the birth of “true people,” completing the initial creation of the world as we know it, The Popol Vuh is replete with colorful characters—some of my favorites have names that could pass as early video-game villains, including the lords Flying Scab, Gathered Blood, Pus Demon, and Jaundice Fiend, part of the cadre of gods that beckon the poem’s protagonists to the Mayan hell. Throughout the book Bazzett sustains its narrative propulsion with a mastery of rhythm, tending toward monosyllables to facilitate three- or four-beat lines, as in this excerpt from early in the poem, when the gods spoke the earth into existence:

and there it was: sudden
as a cloud or mist unfolds
from the face of a mountain,
so earth was there.

It’s worth noting, as the poet-translator does in his introduction, that recent archaeological discoveries have proven this Maya creation story predates the possible influence of Christianity, counter to long-standing scholarly assumptions.

In Bazzett’s translation, The Popol Vuh shimmers in English, buoyant with life the way the epic must have sounded in Classical K’iche’.

In Bazzett’s translation, The Popol Vuh shimmers in English, buoyant with life the way the epic must have sounded in Classical K’iche’. It’s not difficult to imagine why, as the work’s first Dominican transcriptionist, Friar Francisco Ximénez, wrote: “all of [the Maya] knew of it almost by heart.” Milkweed’s new edition demonstrates how clearly the poem belongs alongside its contemporary epics from Europe, proving—as its own narrative suggests—how language makes us human. Toward the end of the poem as it’s presented here, the unknown author describes the first men engaged not just in speaking but in conversation and listening, a portrait worth aspiring to today:

and true people they became.
They spoke and they conversed.

They looked and they listened.
They walked and they grasped things,
and they held them in their hands.

They were excellent people,
well-made and handsome.