Multilingual Writing and Translation in the Americas: Ellen Jones’s Literature in Motion

In memory of José Vázquez Amaral 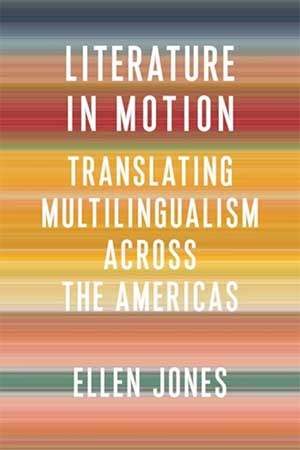 “Movement, I want to show, is something that multilingual writing and translation have in common. Both are fluid, malleable, shifting,” explains the British translator Ellen Jones in Literature in Motion: Translating Multilingualism across the Americas (Columbia University Press, 2022), an academic book that seeks to broaden appreciation for the myriad of strategies translators embrace to expand meaning, give rise to beauty, and propel multilingual literature forward into the hearts and minds of new audiences. It is in this spirit that the book opens with a whimsical metaphor by the Argentine author Andrés Neuman, who writes: “Translation is neither a betrayal nor a substitute, it is another contribution, a further push to something that is already in motion, like when someone jumps into a moving carriage.”

The title of the book, Translating Multilingualism across the Americas, suggests that Jones’s research spans a vastly ambitious geographic territory of extraordinary linguistic and cultural diversity. That would be a tall order for any essay collection, let alone one by a single author in four chapters. Though far less sweeping in subject and scope, the work nonetheless offers valuable insights on a manageable topic: the roles that four translators (including Jones) play in advancing multilingual literature through their own creativity.

The scholarly optic focuses sharply on four contemporary narrative works—three of which were written by US Latinx authors who use varying styles and degrees of Spanglish: Susana Chávez-Silverman’s Killer Crónicas, Junot Díaz’s The Brief Wondrous Life of Oscar Wao, and Giannina Braschi’s Yo-Yo Boing! The final work, Mar Paraguayo, by Brazilian author Wilson Bueno, features Portuñol and Guaraní. Jones offers nuanced technical analyses of lively passages—as translated by Jones herself, Achy Obejas, Erín Moure, and me—of multilingual writing that challenge the constructs of language, gender, and genre. Her most spirited and insightful passages are close readings of linguistic high-wire acts by Chávez-Silverman and Braschi, whose texts are as humorous and stylistically innovative as they are challenging to translate. Jones shows how the palimpsestuous writings of Killer Crónicas are rife with humorous calques, false cognates, and fake translations. She reads into the blanks and creolization elements of The Brief Wondrous Life of Oscar Wao. She proposes queering and unqueering theories about my translation of Yo-Yo Boing!, and relishes in the joyful poetics of a Frenglish rendition by Erín Moure of Mar Paraguayo.

Jones writes assuredly in a clear academic style and with a command of opinion that can make even wobbly assumptions seem firm. Given that she analyzes issues pertaining to the identity, race, nationality, ethnicity, language, gender, and sexual orientation of her subjects and their characters with a flair for convictions, it would have been meaningful to hear Jones question her own cultural biases or reflect on how her own formation might shape the translational and writerly processes that construct her certainty of stance, tone, and judgment. It could have also been interesting for Jones to address fluidity, or the lack thereof, in the genre of academic writing as it pertains to literary translation.

Infelicitous moments in Jones’s rationale include her contention to know the motives of authors and translators. She points to inconsequential factors outside the texts, such as design elements of book covers, blurbs on back jacket flaps, website hyperlinks, and other promotional materials that are more likely to have been generated by graphic designers, marketers, publicists, website developers, SEO firms, editors, or interns than by the writers or translators themselves.

Of deeper consequence, Jones omits references to related books in Latinx studies that appear to have informed her own, such as Christopher González’s Reading Junot Díaz (2015) and Marta E. Sánchez’s A Translational Turn: Latinx Literature into the Mainstream (2019). She also relegates to endnotes rather than incorporate more prominently into the body of chapters significant discoveries on Latinx writing as translation by María M. Carrión (i.e., “Geography, (M)Other Tongues and the Role of Translation in Giannina Braschi’s El imperio de los sueños,” 1996) and on liquidity and translanguaging by Francisco Moreno-Fernández (i.e., “Yo-Yo Boing! Or Literature as a Translingual Practice,” 2020).

In other cases, Jones runs exceedingly close in thought, structure, and phrasing to Frederick Luis Aldama’s observations in Poets, Philosophers, Lovers: On the Writings of Giannina Braschi (2020). Chapter 3 of Literature in Motion evolves out of Jones’s prior essay by the same title, “I want my closet back,” which first appeared online in 2018. To her newly expanded version in this book, Jones echoes Aldama who cites from Writing Off the Hyphen (2007), in which Jose Torres-Padilla questions how politically or not one should interpret the bilingual nature of Yo-Yo Boing!

Torres-Padilla cautions us to be mindful of bringing too much idealism to a linguistical analysis of Braschi. He identifies how relying on language alone as a “stance of resistance against imperialism and hegemony” promotes an idealism that arguably “supports the continuing colonial status of Puerto Rico and undermines any desire for self-determination that might effect real change.”

Torres-Padilla … cautions us to be mindful of bringing too much idealism to a linguistic analysis of Braschi’s work. Relying on language alone “as a stance of resistance against imperialism and hegemony,” he argues, promotes an idealism that “supports the continuing colonial status of Puerto Rico and undermines any desire for self-determination that might effect real change.”

Jones makes a compelling argument that the relationship between multilingual writing and translating is ever-expanding and generative.

The methodology of Jones’s scholarship proves rickety at moments, and yet, despite glitches and peccadillos, the overarching thesis of Literature in Motion lands on a net positive for the field of translation studies. Jones makes a compelling argument that not only is the relationship between multilingual writing and translating fluid, but it is ever-expanding and generative. She makes a welcome case that literary translation is “a form of creative versioning” and that translators are “creative writers in their own right.” 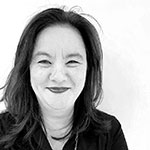 Tess O’Dwyer is a translator, editor, and arts consultant in New York City. She and Frederick Luis Aldama co-edited Poets, Philosophers, Lovers: On the Writings of Giannina Braschi (2020), with a foreword by Ilan Stavans. She also translated Empire of Dreams (1994), by Giannina Braschi, and Martin Rivas (2000), by Alberto Blest Gana. She is a board member of the Academy of American Poets.