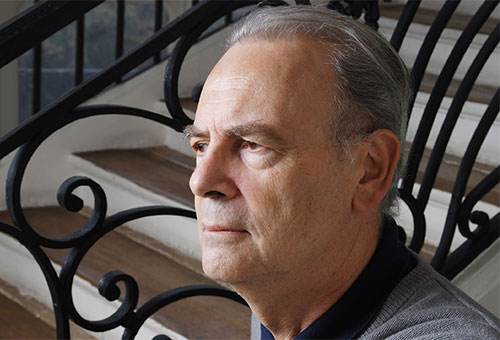 Before he was named winner of the 2014 Nobel Prize in Literature, Patrick Modiano had already received many awards: ten or twelve of them, including the Grand Prix du roman de l’Académie française for Les Boulevards de ceinture (1972), the Prix des Libraires for Villa Triste (1975), the Prix Goncourt for Rue des Boutiques Obscures (1978), and several lifetime achievement awards. He even won two prizes for his first book, La Place de l’Etoile (1968), published when he was twenty-two. Of course, he has written over two dozen novels (or two dozen versions of the same novel) as well as children’s books (some with his wife, Dominique Zehrfuss), essays (Elle s’appelait Françoise, for instance, with Catherine Deneuve, about her sister, the wonderful Françoise Dorléac, who died at twenty-five), short stories and novellas (like “Courrier du cœur” or the great Memory Lane), film scripts (for Louis Malle’s Lacombe Lucien, notably, and Jean-Paul Rappeneau’s Bon voyage), songs (for Myriam Anissimov, Régine, or Françoise Hardy), and even a play, La Polka (it bombed).

The epigraph to La Place de l’Etoile is a Jewish joke that captures the substance of the text: “In the month of June 1942, a German officer walks up to a young man and says to him: ‘Pardon me, sir, where is the Place de l’Etoile?’ The young man points to the left side of his chest.” The title of the novel not only refers to a famous Parisian site and to the star Jews had to wear in Vichy France, it also designates the space of the heart and of alienation, trauma, loss. Featuring a protagonist—Raphaël Schlemilovitch—whose very name is uncouth for a real Frenchman and who evokes every possible Jew (the martyr and the king, the Nazi and the clown, Einstein and Shylock, Jesus, Judas, and Groucho Marx), La Place de l’Etoile constituted a stunning debut. It also constituted something of an end. Its flamboyant combination of savage comedy (Modiano can be very funny) and poignant tragedy is rarely found in the rest of his work, as if the novelist purged himself of it, and its feverish, extravagant manner is strikingly different from the sober, limpid, and graceful style associated with him and from the “petite musique” one can hear in so much of his fiction.

Occupied France as such is not Modiano’s essential concern. It is only the epitome of murky and threatening worlds that are dead yet refuse to be gone.

Still, La Place de l’Etoile contains many of the elements characterizing the latter: an alienated protagonist, for example, a stubborn preoccupation with identity, a dogged interest in origins (Modiano is the son of a Sephardic Jew who dealt in the black market during the Second World War and of a Flemish actress who worked for the Nazi-financed Continental-Films), an obsession with the past and its phantoms. Together with La Ronde de nuit (1969) and Les Boulevards de ceinture, Modiano’s first novel makes up a kind of trilogy of France under the Occupation. This is a setting the writer repeatedly visits, from Lacombe Lucien and Livret de famille to Rue des Boutiques Obscures, Dora Bruder, Un Pedigree, one that he conjures up masterfully, with all its ambiguities and opacities. In fact, his involvement with this setting led him to be seen as one of the initiators and exemplary representatives of the “mode retro,” the critique and reappraisal of Gaullist myths about the French Resistance, French collaboration with Nazi Germany, and France’s general conduct in World War II. Occupied France as such is not Modiano’s essential concern. It is only the epitome of murky and threatening worlds that are dead yet refuse to be gone, worlds full of uncertainty, of underhanded collusions and betrayals, of ghosts, anxieties, silences, where fathers abandon their children, innocents are massacred, accident reigns and takes on the look of fate. In these baffling and dangerous worlds, which often wear a Parisian face (it is difficult not to associate the wanderings of Modiano’s characters with Paris) and in which fictional and historical figures often cross paths, space—maze-like, enveloped by fog, mist, rain, snow, harboring scraps of bygone eras—is regularly out of place. The Place de l’Etoile is not where one expects it to be. A small French resort in Haute-Savoie looks like a Caribbean island (Villa Triste) and a casino in Normandy like a Chinese pagoda (“Courrier du cœur”). Rue des Boutiques Obscures, the Roman street where the Communist party had its headquarters, at the edge of the Jewish ghetto, does not bear its Italian name, via delle Botteghe Oscure. Like space, time is strange and mazy. It passes—things change, they fade, they vanish—yet it remains in the sweet smell of nostalgia or the stench of despair. (Modiano’s characters listen to songs like “El Reloj,” “Memory Lane,” “Schön war die Zeit?” and “Sag me warum.”) What was is what has been, and memory, which is an exacting need as well as a fearsome duty, cannot and must not leave it alone.

Like space, time is strange and mazy. It passes—things change, they fade, they vanish—yet it remains in the sweet smell of nostalgia or the stench of despair.

Tirelessly combining “Ubi sunt” and “Remember!” Modiano’s work could be titled Twenty Years After. Through memory—our own or that of others—and with the help of a few leftover bits and pieces—a yellowed picture, a worn-out tape, an old directory, a few ghostly figures—perhaps what happened between then and now, between “I was” and “I am,” can be retrieved and understood. The archive, however, is fragile, heterogeneous, contradictory, and memory—with its meanderings, tricks, and traps—is uncertain and unreliable. For Atlantis to be reached and explored, they must be complemented or replaced by (narrative) imagination.

Modiano’s characters need very little to begin restoring an image of the past. A fragment of wallpaper or a sliver of cloth can function as a palimpsest, and narrative imagination provides a tool for filling gaps, a space for linking scattered shreds, disparate beings, discordant events. But the resulting story, even as it makes clear that something happened, is never quite definitive. In it the past is not fully recaptured and not fully integrated with the present. The self is not illumined. The question is not supplanted by the answer, and re-membering proves never-ending. More than the author of haunting and moving texts like Les Boulevards de ceinture or Memory Lane, Rue des Boutiques Obscures, Remise de peine, and Dora Bruder, Modiano is the creator of a discontinuous and paradoxically memorable story in which questing must go on for a solution to the puzzling enigma of time, life, and self.

Gerald Prince is Professor of Romance Languages and chair of French and Francophone Studies at the University of Pennsylvania. He is the author of many articles and reviews and of several books, including A Dictionary of Narratology and Guide du roman de langue française: 1901–1950.