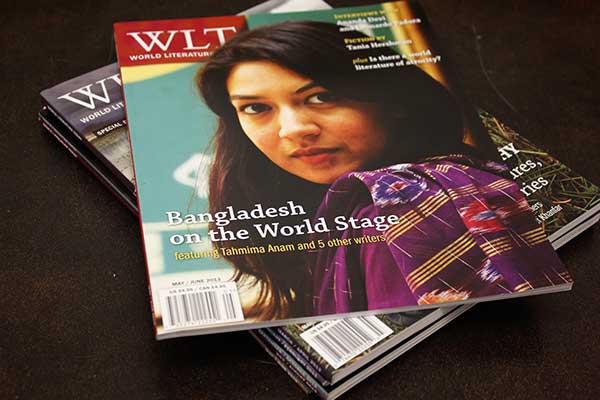 Two weeks ago, in a post on Words Without Borders, Alison Anderson wondered aloud, “Where Are the Women in Translation?”:

As most of the readers of these pages will know, three percent is the rough estimation of the number of translations from other languages into English published in an average year. Twenty-six percent, however, is just an average I have chosen from my informal and hardly exhaustive or scientific survey into the percentage of women authors published in translation in a given year.

According to Anderson, the numbers get worse when it comes to literary prizes: only three women translators (15 percent) have won the PEN Translation Prize in the last twenty years, and only one woman author has won the Independent Foreign Fiction Prize since its founding in 1990. Anderson’s questions are persistent:

It is not the lists or the numbers that matter per se; it is what they represent, and the questions they raise. Where are the women in translation? Why aren’t more women getting into print in English, particularly when one bears in mind that the proportions are reversed when the gender of the translator is in question? . . . Why aren’t women translators promoting more women authors? . . . Do women have a harder time getting published? . . . How much of this is due to an unconscious, involuntary gender bias? Or are women . . . simply less inclined to submit articles, reviews, and novels than men are? Do they give up more easily, especially in the face of patriarchal disdain in some of the source countries?

To stick with literary prizes for the moment, let’s look at the biennial Neustadt International Prize for Literature (sponsored by WLT). Only four of the twenty-two laureates (less than one in five) have been women—between Elizabeth Bishop (1976) and Assia Djebar (1996), male writers won the Neustadt Prize nine times in a row. Then Claribel Alegría won in 2006, followed by Patricia Grace in 2008. The composition of the juries may have something to do with it: of the 227 jurors who have served on the selection committees since 1970, only 56 have been women (25 percent). In recent years, women translators have been well represented among the authors who have won the Neustadt Prize, including Betsy Wing (translator, among others, of Assia Djebar), Edith Grossman (translator of Álvaro Mutis), Clare Cavanagh (translator of Adam Zagajewski), and Margaret Sayers Peden and Carolyn Forché (translators of Claribel Alegría). Of course, it would be wrong to essentialize the genders into binary opposites—male jurors often nominate female writers, and female jurors often nominate male writers, but in the absence of jurors to champion their work (Barbara Frischmuth, Daisy Zamora, and Joy Harjo, respectively), Djebar, Alegría, and Grace would not have even been in the running for the prize. (Bishop had the luxury of being nominated twice in 1976, by John Ashbery and Marie-Claire Blais.)

Yesterday, the National Book Critics Circle hosted a panel on women, gender bias, and book reviewing during Book Expo America featuring Pamela Paul, Erin Belieu, Kathryn Schulz, Rob Spillman, Meg Wolitzer, and Laurie Muchnick. According to the press release, “For the past three years, VIDA: Women in Literary Arts has been conducting a count of how many of the books reviewed by prominent publications were written by women and by men, and how many reviews were assigned to female and male reviewers. The significantly lopsided results have helped begin a conversation about gender bias in the literary world.” (Check out the NBCC blog, Critical Mass, for highlights.)

WLT has been mindful of the VIDA count the past three years—VIDA’s research reveals that the proportion of female writers represented in many of the prominent literary journals in 2012 in the US and UK ranged from a low of 16 percent at The New Republic and Harper’s to the upper 20s or low to mid-30s in most other journals. While a roiling debate has ensued following the publication of each VIDA count, little attention (to my knowledge) has been paid to the role of women editors at these publications and at other literary and cultural magazines and journals in the US. Just looking at the current masthead pages of the publications included in the 2012 count, only six out of the sixteen top editors or editors in chief (38 percent) are women: Deborah Chasman, co-editor of Boston Review, Ellen Rosenbush at Harper’s, Mary-Kay Wilmers at the London Review of Books, Katrina vanden Heuvel at The Nation, Pamela Paul at the New York Times Book Review, and Wendy Lesser at Threepenny Review. Surely there is some correlation in those numbers? I checked with VIDA’s editorial committee, Melinda Wilson and Carmen Giménez-Smith, and they told me that a study of editorial gender balance at the magazines included in the count hasn’t been conducted, but it would be interesting to see the results of such an analysis.

Here at WLT, five of our seven full-time staff are women, but dating back to 1927, only one out of the ten editors at the top of the masthead has been a woman: Bernice Duncan, who served as acting editor (1966–67) in between Robert Vlach, who died while walking home from the office one day, and Ivar Ivask, who held that position for twenty-five years. During Duncan’s time as acting editor, the place of “Editor” on the masthead page was left blank, and when Dr. Ivask was hired in summer 1967, her deferential note introducing him made light of her own role in guiding the journal in the interim: “For nearly eighteen months our quarterly has been without an Editor. The experience of supervising it as Acting Editor for this period has been for me a satisfaction, much work, and some worry. I am quite ready to put this responsibility upon more capable shoulders.” Duncan worked for the journal from 1947 to 1970, under five different editors, starting out as a part-time editorial assistant and retiring as associate editor. It’s clear from her correspondence from 1966–67 on file that she saw her role as a caretaker (“carrying on as he [Dr. Vlach] would have wished”), despite her considerable editorial credentials, her facility with Spanish (which she taught in the Department of Modern Languages) and French, and her wide travels to such places as Egypt, Mexico, Italy, and Hungary during her tenure.

To return to the question of women translators, Sandra Bermann offers a compelling analysis of the role of translation in the creative writing of Adrienne Rich. Bermann writes, “. . . compared to the productive, creative work associated with the writer and poet (usually gendered male), the work of the translator (usually gendered female) has traditionally been viewed as merely reproductive, affected by the overall dichotomy and hierarchy between productive and reproductive work” (“Re-vision and/as Translation: The Poetry of Adrienne Rich,” in Translating Women, 2011). Although Alison Anderson may be right in focusing on the lack of representation among women as writers and translators, especially as recipients of literary prizes, it seems clear that women writers, translators, and editors are doing inspired, fascinating, and important work even though they are not always being properly recognized for it.

Daniel Simon is a poet, essayist, translator, and WLT’s assistant director and editor in chief. His previous book, the edited volume Nebraska Poetry: A Sesquicentennial Anthology, 1867–2017, won a 2018 Nebraska Book Award. His most recent edited collection, Dispatches from the Republic of Letters: 50 Years of the Neustadt International Prize for Literature, was published by Deep Vellum’s Phoneme imprint in fall 2020.

A History of Me

Photo by Burgess Milner / Unsplash Winnowing down to essentials during a pandemic, a writer with too much time to think cleans out her...
September 27, 2021 | Marlene Olin
Black Voices

Photo by Igor Karimov / Unsplash Series editor’s note: In this week’s poem, the speaker finds himself to be on the outside, looking...
September 23, 2021 | Romeo Oriogun
Current Events

Photo by Connie Smothermon In the lead-up to National Punctuation Day (September 24), we asked writers and translators...
September 22, 2021 | The Editors of WLT
Culture