A poet often sculpts language to invoke memory, feelings, and reflection. In this list of found poems, we discovered seven memorial sites all over the world that have incorporated poetry to commemorate and honor.

Located in Arizona’s National Cemetery in Cave Creek is the Women’s Veteran Memorial featuring the poem “Invisible Soldier” by Sarge Lintecum. The memorial and poem honor the women who serve, and have served in the military. 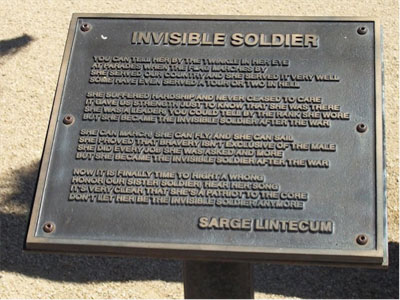 Kundasang War Memorial in Malaysia is dedicated to the Australian and British prisoners of war during World War II who died during the death marches from Sandakan to Ranau, as well as the Malaysians who helped them. There are four different gardens representing the different nationalities, and a reflecting pool with a poem by Nelson Short in honor of the soldiers. 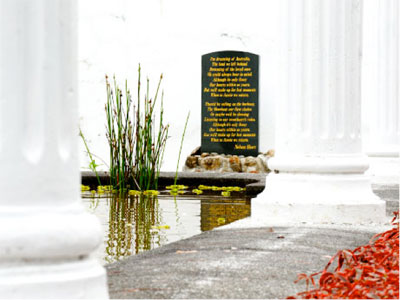 Located in Columbia City, Indiana, is the Korean War Memorial dedicated to all the soldiers who served. The memorial features a poem by M. Garvey titled “We Remember” surrounded by images from the war. 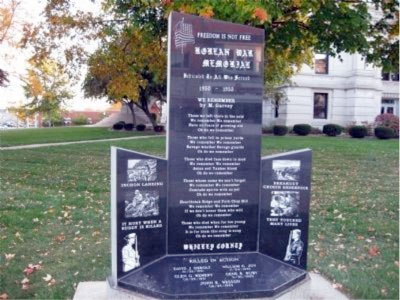 The Tuol Sleng Genocide Museum is located within the former prison grounds of the Khmer Rouge regime in Cambodia. The final room of the museum contains a poem written by former Cambodian prison guard Sarith Pou, entitled “The New Regime.” For more information on the history and photographs, visit http://www.tuolsleng.com/history.php 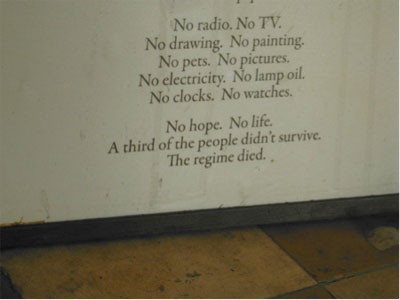 The Belzec Death Camp Memorial located in Poland is dedicated to the Jewish families who were killed or disappeared during the Holocaust. One of the featured texts in the memorial is a poem written by Dan Pagis that was found in one of the boxcars. 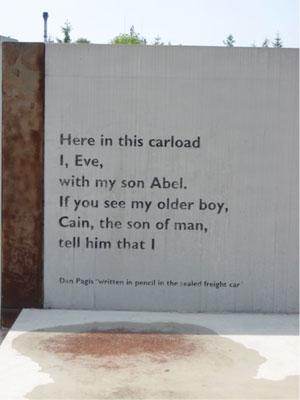 Romania’s Sighet Museum was created to honor the prisoners of the Soviet regime. In Room 51 of the museum, the cell is lined with poems written by political prisoners. For more information on the museum, visit http://www.memorialsighet.ro/index.php?lang=en. 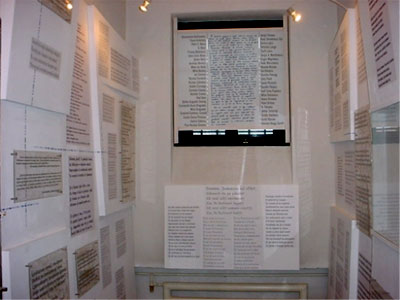 The Holocaust Museum in Washington, D.C., contains the history, photographs, and items of the Jewish genocide that occurred during World War II in Nazi Germany. A passage from Moshe Shulstein’s poem “I saw a mountain” is featured above a large pile of shoes (barely visible in the photograph). The entire poem can be found on this site: http://www.jewishjournal.com/a_jew/item/the_shoes_of_majdanek_39100812. 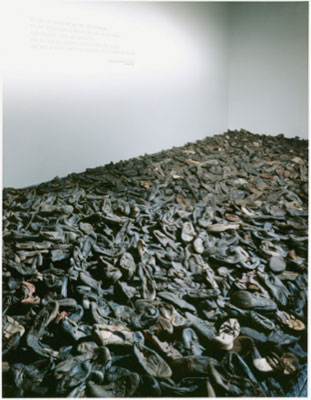 Photo by Edward Owen.
For more information on the Holocaust and to locate this photograph, visit http://www.ushmm.org.

Know of other memorials around the world that incorporate poetry in a unique or beautiful way? Let us know in the comments.