A new mother in Mexico contemplates the future—for her daughter, for all of us.

On February 1, 2020, as I was giving birth in Mexico City, fifty-four people in China died of Covid-19. That same day, Spain reported its first national case: a German tourist isolated in a hospital on the Canary Islands. The news was still reaching us in a hazy light: twenty-seven more days would pass before the first case was confirmed in Mexico, and over six weeks before the first death. At home, we learned what was happening in other countries as if they existed in a different galaxy, one without umbilical cords or cupboards crammed with diapers. In the hospital room where my daughter and I found ourselves face-to-face for the first time, it was impossible to imagine what was coming.

Exhausted, we now remind each other to resist the pressures of productivity culture, surrender to the waiting game, and track the progress of our microscopic foe.

The avalanche hasn’t abated since then. I write these words in mid-April, from the confinement urged by the Mexican health department. The Jornada Nacional de Sana Distancia (National Period of Healthy Distancing), represented by a cartoon superheroine striking an excessively optimistic pose, began on March 23. Since then, life, once made up of days and their corresponding nights, has blurred into an amorphous mass of pajamas and dirty dishes. At first, conversations and messages on social media were abuzz with ideas for how to “make use” of the quarantine, which seemed at the time—ah, innocence!—like the perfect opportunity to learn a new language, finish a novel, meditate, tackle the stack of books on the bedside table, or become a five-star chef. But things have changed. Exhausted, we now remind each other to resist the pressures of productivity culture, surrender to the waiting game, and track the progress of our microscopic foe.

Caring for a newborn during a pandemic is a special challenge. My quarantine (a word rooted in the Italian quaranta, “forty”), which began on February 1, has stretched out into an octantine, a noventine, etc. While I’m still here in my own space, everything is new, because my daughter’s body has imposed its rhythm on all the rest of us beings—both animate and inanimate—who inhabit this house. The dog protects her without entirely understanding what kind of creature we’ve invited to live with us, and even the plants brighten when the baby laughs. I watch her grow with a mixture of terror and astonishment, and I measure the days by her transformations.

More than anything else, I’ve learned to listen: I put on audiobooks while she nurses, and then we sit together at the window to hear the birds’ spring song, interrupted only by the clamor of the occasional plate breaking in the kitchen. (We’ve broken so many plates these days that my husband thinks we must actually want to see things shatter. I think he’s right.) Our upstairs neighbor talks on the phone with several people in a row, telling each one exactly the same thing—usually something unfortunate that’s befallen someone else—and I entertain myself by trying to parse the differences in her accounts. When I lay my daughter on the changing table, I place an ear to her chest and listen to her heart.

I’ve learned to do everything one-handed, obsessively checking my phone for the latest news. Social media feeds fill with fake images of animals enjoying landscapes cleared of human beings: dolphins euphorically swimming the canals of Venice, orangutans washing their hands, drunk elephants napping in a tea plantation. “Who cares if it’s false?” writes José Luis Espejo in a beautiful essay about parrots in Madrid and silence during the pandemic; “what matters to me is proving people’s need to reconcile with the world when they no longer have any idea how.” Beyond the fake news, it’s a fact that the pandemic is bound with invisible thread to the ways in which we’re destroying the planet at inconceivable speeds. It isn’t hard to see how this crisis exposes the unsustainability of the lifestyle we’ve grown used to. Sometimes it feels like nothing is happening at all in the languid drift of the hours. The truth is, though, that our very future is being reconfigured—and fast.

Beyond the fake news, it’s a fact that the pandemic is bound with invisible thread to the ways in which we’re destroying the planet at inconceivable speeds.

The effect of the baby’s presence is twofold. On one hand, watching her change makes time pass more quickly: she outgrows her onesies overnight, and her weight in my arms confirms that the weeks continue to elapse. But the opposite is also true. Since my time belongs entirely to her, and without help from extended family, I’m experiencing a kind of tender servitude. We don’t talk about it much, but motherhood, at least in the early months, is touched by grief. The person you were before you split in two grows vague and inaccessible, and although everything is knit together with intense love, the sense of loss is piercing. In my darker moments, I think about how much easier quarantine would be if my daughter didn’t exist. Before guilt overtakes me, I fantasize about everything I’d have time to do if I weren’t subjected to her needs. I don’t get very far: the premise is a trap. Before, I’d begun to grasp that the world in which I wasn’t a mother had ceased to be; now, with the coronavirus, this has become an absolute. As I make the millionth quesadilla of the day, I can’t stop thinking about what life will be like on the other side.

We cook in confinement: social media and group chats teem with photos of banana bread, homemade tacos, dishes improvised with whatever’s in the pantry. It’s as if we’d suddenly discovered the tranquil rhythms of baking, the slow softening of carrots and potatoes. We spend so much time in our kitchens because eating is an activity that doesn’t stop, can’t stop. In this sense, it’s striking that many of the health conditions that exacerbate the virus, like diabetes and obesity, are related to how we eat—and the high risk of these factors in Mexico is one reason why the virus is more lethal among the younger population here. What are we going to do with this information when the health emergency is over and we leave our kitchens to eat out again—at food stalls and in restaurants, in markets and on the go? I don’t have an answer to this question, but indifference and passivity now seem like impossible reactions in light of what we’re experiencing now.

But I don’t know if we should even bother looking for lessons in the pandemic. Speaking for myself, I wouldn’t even know where to start. I think it’s time to pause and watch, to listen, to think about how we’re going to reinvent ourselves. Sometimes, as I walk the dog, I make mental lists of everything I’m going to do when all this is over. As it turns out, it’s nothing major or dramatic, just little scraps of an everyday life we couldn’t have imagined would be so fragile: sitting down for a meal with family, exchanging pleasantries with the waitress at a café, eating a coconut popsicle in the park, walking side by side with my friends.

A certainty shines through the fog of what we can’t yet know: the future isn’t what we thought. All it took was a few months—nine, in my personal count; a handful fewer in the outside world—for everything, absolutely everything, to change. And although it’s hard, between canceled projects and baby bottles, to think with any kind of optimism, maybe, by the time these words are published, we will have already encountered important teachings, glimmers of a worthwhile future. Major crises, I think when anxiety gets the best of me, have always brought about major transformations, and the most exciting artistic movements usually respond to a moment of chaos. We’ll see.

Meanwhile, it’s difficult, if not impossible, to do almost anything: after making my way through a few pages of a book, I realize I hadn’t been paying attention and have to start over; I try to watch something on TV, but I’m distracted by the clack of my dog’s claws on the floor; I write a few lines and devote myself to erasing them the next day. I barely manage to grab my phone and send a few texts between one diaper and the next. The Argentine writer Mariana Enriquez said it better: “Everything is contradictory and distressing. A writer, an artist, is supposed to be able to interpret reality, or at least to try. As someone who works with language, I should be able to contribute to public discourse. Thinking, writing, interpreting. But with every passing day, thinking about this pandemic becomes a dense fog: I can’t see, I’m lost, I can barely make out my own hands if I extend them.”

It does console me to think that these days, so rough to the touch, won’t linger in my daughter’s memory.

It does console me to think that these days, so rough to the touch, won’t linger in my daughter’s memory. Her universe won’t have been rocked like ours. For her, whatever comes next will be normal life. When she’s older and I tell her about Covid-19, the world of before will sound to her like science fiction. She will be the one to teach me how to live. For now, I curl up on the couch and think about the mandate of Calvino’s Invisible Cities. These are days of seeking and learning how to recognize who and what, in the midst of hell, is not hell. And make it last, and give it space. 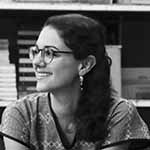 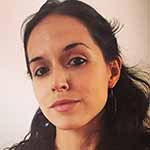 Robin Myers is a Mexico City–based translator and poet. She was among the winners of the 2019 Poem in Translation Contest (Words Without Borders / Academy of American Poets). Recent book-length translations include The Restless Dead, by Cristina Rivera Garza (Vanderbilt University Press, forthcoming); Cars on Fire, by Mónica Ramón Ríos (Open Letter, 2020); Animals at the End of the World, by Gloria Susana Esquivel (University of Texas Press, 2020); and Lyric Poetry Is Dead, by Ezequiel Zaidenwerg (Cardboard House, 2018).